In this novel by Raymond Chandler, Private Investigator Philip Marlowe is hired by a wealthy widow to track down a missing gold coin that she thinks her shiftless daughter-in-law has stolen from her late husband’s priceless collection. Ambivalent about the case and his employer from the outset, Marlowe discovers the missing young lady may also be involved with a counterfeiting scheme, murder, and a long term blackmail plot.

As he unravels the conspiracy, Marlowe’s employer suddenly has a change of heart. Though it may cost him the job and possibly his life, Marlowe sticks with the case until he discovers a dark secret that not even decades’ worth of lies can keep hidden.

A Flip of the Coin

As usual, Chandler provides a thrilling mystery with a strong element of menace and personal danger told in the author’s trademark terse and witty style. The dialogue between Marlowe and the abrasive Mrs. Murdock, in particular, makes the pages seem alive with cleverness and tension as it becomes clear she is the first in a line of characters trying to hide something from Marlowe even while demanding his assistance. Chandler also expertly increases the intrigue by deepening the mystery over time and introducing increasingly sinister figures such as the shady coin-dealer, Elisha Morningstar, and the Italian landlord and Funeral Director, Pietro Palermo.

While Chandler’s style is in top form there are a few quarrelsome elements with the plot. There are a few situations, such as the investigation into the murder of James Pollock and overhearing a confrontation between two other characters, where Marlowe seems much more passive than he has in other Chandler novels (217-223). In these instances he appears to be a fortunate recipient of information rather than actively displaying his keen sense of perception or his pitiless information-gathering methods. Of course, he uses the knowledge passively gained to make spectacular judgments and revelations, but they don’t feel as strongly earned as similar scenes in The Big Sleep or The Lady in the Lake.

What the reader might miss in terms of plot points is recouped in stunning and forthright exploration of Marlowe’s character. As with Chandler’s other novels, the setting of 1940’s Los Angeles and Pasadena are ripe with corruption and characters all seeking to do whatever is in their power, legal or not, to fulfill their own self-interests. Usually Marlowe provides a counterpoint to this bleak world through his dedication and adherence to a personal moral compass upon which he doesn’t spend much of time reflecting. In The High Window, however, Detective Breeze aggressively questions him about his own motives and honesty, and Marlowe responds by citing a case where the wealthy father of a murderer manages to use his society connections to essentially make the crime look as though someone else had committed it (118-21). In his explanation, Marlowe reveals himself as something of a humanist who believes that people, regardless of money or social station, have a right to the truth and that Marlowe operates as a private detective so that he is beholden only to his conscience and the truth.

The High Window stands as another solid and evocative work that confirms Chandler’s skill not only in the genre but also as talented author capable of handling complex characters, a fast-paced plot, and a setting that truly feels inhabited by the characters. This novel is well worth reading if for no other reason than to experience a book where the author has a clear vision and command of his craft, and it ranks among the strongest of Chandler's hard-boiled stories. 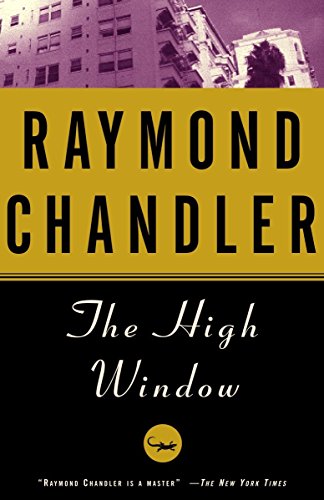