Review of She Who Waits

Low Town watches as there is a changing of the guard. As political players and institutions jockey for power, Warden sees the writing on the wall and decides to make a play that will see him and the few people he cares about escape before the impending social chaos takes hold. Before he can get clear of Low Town, though, he has to set up his rivals, find a way to leverage himself away from the watch of the secret police of Black House, and deal with the sudden reappearance of Albertine, the woman who helped cause his downfall. Warden rushes to secure what he can, but a lifetime of misdeeds has created a long list of enemies who all want to take a shot at a man they sees as older, weaker, and ready to fall.

As with other books in the Low Town series, Polansky makes sure She Who Waits has a number of elements in its favor. Rigus—and Low Town in particular—is an evocative setting of decaying industrialized urban grandeur. Standard tropes from crime noir and fantasy stories are twisted until they meet in interesting if not always new ways. This setting has remained a primary aspect of intrigue through all books in part because Polansky remains willing to show off different element of it each time. By the halfway point of She Who Waits, Low Town has essentially become it own character and perhaps the main draw of the book in the same way that

Also in the novel’s favor is its pace. The book almost never lags as Warden moves from one point to another, determined to come out on top at all costs. The gallery of side characters helps keep everything interesting even if they frequently don’t get enough space to become more substantial instead of being just side notes in Warden’s activities. The sense of constant motion, however, keeps the reader moving forward through the novel.

Graveyards Full of Boys Who Wore the Crown

Several parts of the story significantly hinder the book. Primarily, Warden is unlikable at a subatomic level, making it difficult for many readers to care about his concerns. His actions as a drug dealer, manipulator and all-around thug are largely forgivable; the real problem is that he rarely aspires to anything more. For instance, in Joe Abercrombie’s novels even characters as ruthless or depraved as Logan Ninefingers, Caul Shivers, and Nicomo Cosca aspire to be better than they are, even if the means by which they try to make themselves better often backfire. It is only in the few instances where Warden puts the needs of others ahead of himself does he seem worth following. Similarly, his abrasiveness becomes tiring. Because he is so aggressive in his tough guy persona, remarks that would sound witty coming from Sam Spade or Philip Marlowe come across as insulting or even like a caricature. Warden overshoots and finds himself in the over the top company of Mike Hammer. His caustic personality coupled with his general lack of positive ambition doesn’t leave many handholds to give a reader purchase.

Another problem comes from the plot. Low Town and Tomorrow, the Killing also had complicated plots, having more in common with noir detective novels than high fantasy. While the resolution of the previous novels may not always have been satisfactory, they had a line of logic the reader could follow as Warden delved deeper into the problems. She Who Waits abandons one plot about rival narcotics gangs that Warden is setting up in favor of a convoluted espionage plot that has been in the background. The shift widens the scope of the novel and not necessarily for the better. Warden goes from neighborhood crime kingpin to manipulator of international politics too quickly, especially because the story is at it most satisfying when Warden is matching wits and weapons with Crowley, Egmont, Uriel, or Toussaint.

On a related note, Albertine is criminally underdeveloped. For a character who was a central aspect of Warden’s life, the reader is given exceptionally little in the way of explanation or reasoning as to why her connection with him should be so important. She is less developed than the Old Man of Black House, who is something of a stock boogey man secret intelligence figure. Albertine’s return to Rigus and distant involvement with the happenings of the novel would likely make more sense with better context, and it would give weight to her situation with Warden, which the reader is told rather than show is important several times. Without any evidence to make it more real, though, the relationship between her and Warden comes across as hollow rather than important and a rare emotional spot for a character that tries so hard to be made of stone.

A World Full of Hard Men

She Who Waits is another fine entry in the Low Town series, and any readers looking for a different take on the fantasy genre could do a lot worse than to give the whole series a read. Even fans of more traditional fantasy novels will want to give Polansky's books a try so long as they don’t mind tagging along with an anti-hero. 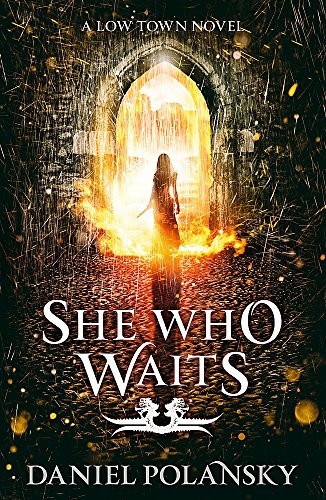