Review of The Chill

After giving witness testimony for a client in Pacific Point, Lew Archer’s desire for a peaceful fishing trip is overturned by a job helping a young man, Alex Kincaid, track down the woman he recently married. What starts as a fairly easy case to find a missing woman, though, quickly becomes far more complicated when Dolly Kincaid’s estranged, convicted-murderer father reappears, and a professor from a nearby college dies violently. Finding a way to solve the murder along with a related murder from decades before, Lew Archer finds himself searching for the truth while running up against small town sheriffs, therapists with their own motives, conmen, a collegiate academic administration, and a few old women with hard opinions. Everyone has secrets they don’t want getting out, even if the innocent must suffer, but Archer, and outsider to the town, is interested only in assuaging his own guilt by discovering the truth.

The overriding theme of the novel is that the need for penance drives human action to extremes. Desiring the release that comes with redressing a grievance is what propels most of the characters, especially the protagonist. Following the death of Professor Helen Haggerty, Archer says, “this death hit me especially hard. I could have prevented it” (68). He turned her down earlier while suspecting she was in danger. To ease his conscience, he throws himself deep into the investigation. Even Phyllis, the wife of a friend who gives him information, comments on it when Archer reaches out for help on a case that doesn’t really involve him (116). He hasn’t been brought on to solve the case or the tangled crimes that are attached to it, but he stays on because he feels responsible for the woman’s death.

Following these matters of penance are all the other central characters as well. Mrs. Bradshaw also suggests she would take on Archer’s services because of a kind of penance for her misdeeds, past and future (127). She’s one of a number of dishonest individuals involved, and she’s in the market for information as much as penance. The therapist, Godwin, is also trying to atone for what he believes are his prior shortcomings. It is his wife who talks about how hard he’s working on Dolly’s behalf because he felt like he let her down years before when other adults in her life coerced her into giving the testimony that put her father, McGee, in prison (144). Haggerty’s father also fits this pattern, as his drunkenness and aggression stem from his too late desire to repair the relationship with the daughter he drove away (170). Because he thinks penance is all he has left, it motivates his confrontational behavior.

The setting is at its best in Pacific Point and less evocative when Archer travels to Reno and Chicago. The small college town on the coast seems right as the sort of location where all these secrets could be buried for a long time before bursting forth with confusion and violence. Also, Macdonald takes greater pains in describing not only the location but also the mood of Pacific Point, whereas the larger cities just seem like bigger backdrops for what Archer has to do there.

The tangled connection of the characters makes for a dense and complex investigation, but it also makes the world seem claustrophobic in that all these people from Boston to L.A. would be so intimately connected. There doesn’t seem to be room for actual citizens that at least are always on the fringes of the stories of Hammett and Chandler, and without those sorts of characters, the settings sometimes seem a bit lifeless. That effect, frustrating as it may be, could be intentional, as the college is, at one point, described appearing like “a movie lot which had shut down for the night” (42). On a somewhat related note, the conclusion seems a bit rushed, forcing readers to wonder about what awaits characters in immediate future, a bit like Lady in the Lake.

The Chill is a great show of Macdonald’s talents, as it is a hard-boiled detective novel with a tangled plot and psychologically complex characters. 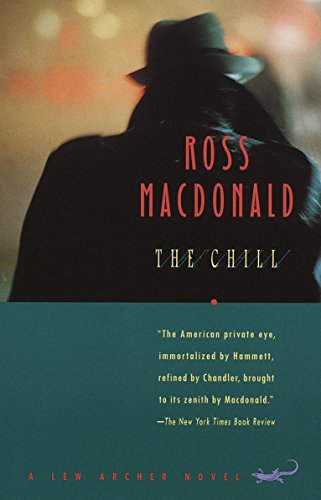