Review of The Dwarf

Set in an unnamed Italian principality during the Renaissance, Par Lagerkvist examines the evil crouched in everyone through a narrative related by a dwarf who attends to an unscrupulous prince.

“In What way is He Misshapen, I Wonder?”

The dwarf explains the dark and unseemly personal and political dealings of the court, giving his impression of all that surrounds him. When the opportunity presents itself, the dwarf escapes his tedious life by accompanying the Prince into war against his neighbors. Conflict and battle thrill him, and he sees it as the natural state of humankind. Understandably, he is upset when the war cannot continue, and the Prince proposes a peace-summit. The prospect of the boredom of peace drives the dwarf to despair, but he is rescued when the Prince confides in him a terrible plan.

The feast at the peace-summit is a grand occasion full of formal decrees, displays of brotherhood, and even a play endorsing universal peace. Following the Prince’s instructions, the dwarf proceeds to poison the wine all of the Prince’s enemies, which leads to mass confusion, terror, and carnage. Some of the betrayed guests escape, however, and war is brought to the Prince. The city falls under siege; famine and plague begin to ravage the court. The dwarf delights in the increasing chaos until the Prince turns him into a scapegoat for all the tragedy that has befallen them. In the final scenes the dwarf narrates from his dungeon cell, explaining how he knows that one day his viciousness and misanthropy will be needed again, and he will be unchained.

“I Delight in Nothing”

The dwarf does not think of himself as human and has trouble connecting to them and their concerns, which he sees as tawdry and petty. Only the Prince interests the dwarf because he too seems above the mundane concerns of humans. Everywhere the dwarf looks he sees corruption, but what bothers him is the lies and half-truths people uses to cover up what he sees as their true nature. The dwarf says, “Human beings like to see themselves reflected in clouded mirrors” (225). Ideas of love and peace seem foreign and offensive to him because they repress the violence and unwholesomeness that is the true root of human behavior.

A prominent extended metaphor is the dwarf’s deformed physical appearance. On an obvious level it is a reflection of his malicious personality. Unlike the other characters who hide their twisted designs behind facades of nobility, valor, philosophy, or artistry, the dwarf cannot hide and sees no reason why anyone else should either.

On a deeper level, the dwarf represents the essential human capacity for and delight in turbulence and destruction (an interesting development since the dwarf doesn’t see himself as human). Wherever he is active the dwarf brings chaos and mutilation for its own sake. For instance he convinces the Princess that her lust is wicked beyond redemption and drives her into self-induced privation and seclusion since she fears God will not forgive her. That he is imprisoned is also telling. He explains that he is as essential to the city as the Prince when he writes, “I still belong to the castle just as much as before! To prove it they have even welded me to it! We are forged together” (217). The dwarf will forever be a part of the life of the castle and the city in the same way that he sees the vileness that is always present in human life even if people try to bury it in their dungeons of their psyche. The first person point of view reinforces this theme since it makes the reader complicit in the dwarf’s crimes.

“Only I Despise This Pretending”

The Dwarf is an excellent novel in a dark, existentialist manner. In tone and its terse style the book can favorably be linked with work works by Albert Camus, especially the last third which has a lot in common with The Plague but is even more grim. It is works like The Dwarf which earned Lagerkvist his Nobel Prize in Literature in 1951, and this novel endures if for no other reason than it examines the idea of human evil. 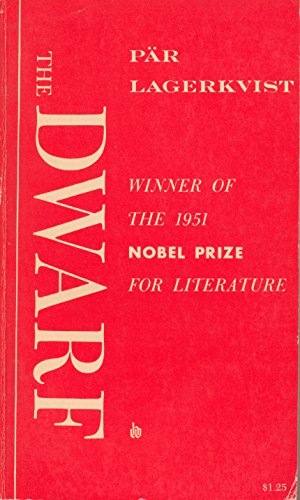