Review of The Lady in the Lake

Philip Marlowe, hired to track down one man’s missing wife, discovers a web of murder, extortion, and police corruption that extends beyond Bay City, California.

Degrace Kingsley, fearing more for his own reputation than for the safety of his wife, hires Private Investigator Philip Marlowe to uncover her whereabouts after receiving conflicting reports about her. Marlowe also learns that a woman named Murial Chess, wife of the handyman who looks after the Kingsley’s cabin at Little Fawn Lake, disappeared around the same time only to turn up dead and hidden in the lake. Suspicious of the coincidence, Marlowe begins investigating the disappearances of both women much to the chagrin of Mr. Kingsley, the Bay City police (especially a ruthless detective named Degarmo), and a doctor of ill repute who’s wife also died under mysterious circumstances several years ago.

As with Chandler’s other novels one of the best sources of tension comes from Marlowe, who does his best to act with integrity in a world where greed, corruption, and apathy all conspire to disintegrate the moral core of every character. Marlowe comes across as jaded, cold-blooded, and detached because he needs to be in order to do his job. In his unguarded moments, though, readers see a man tormented by dreams about the drowned woman, who realizes the emptiness of his personal life, and understands the necessity of loneliness in his line of work even while wishing for more meaningful interpersonal relationships (99, 155-6, 237). Nonetheless, Marlowe manages to deport himself with class and wit that other characters seem to lack all while making progress on several investigations.

In order to get anything done with his cases, though, Marlowe resorts to means that, while effective, are morally questionable. Feeding liquor to an alcoholic for information, breaking and entering, and not contacting the police after discovering a body are all ethically questionable to say the least (39-40, 76, 115). The readers ultimately side with Marlowe because his moral center remains untarnished despite being constantly warned off the cases, bribery attempts, and police brutality (124, 153-4, 173). In each case, Marlowe doesn’t rattle under the pressure. Chandler presents a world in which good and evil—black and white—are inseparably mixed, so readers side with Marlowe whose grey appears significantly less dark that those around him.

An element that is both intriguing and frustrating to readers is the first person point of view. Everything is filtered through Marlowe’s perspective, yet the readers learn little about him directly. He proves his character through his deeds and his analysis of everything external rather than through long soliloquies about his private life and feelings. This development forces readers to pay close attention to not only the intricate details of the plot but also the many subtexts of dialogue and actions characters take to make up their own minds. In this way, Marlowe, too, is a mystery that unfolds alongside the criminal and social conspiracies of the novel.

Chandler also crafts an atmosphere that is distinctly 1940’s American West Coast in that there are direct references to the war effort, such as one man waiting for his enlistment papers to clear and the sentry on the dam at Puma Lake (175). The underlying dread about the war colors the way readers see many characters trying to escape the uncertainty about World War II through vacationing, drug use, identity theft, and occasionally murder.

The Lady in the Lake is a thrilling hard-boiled detective novel that reads at a fast pace in spite of the substantial amount of details to be had. By keeping all the information straight up through the revelatory climax Chandler proves himself once again to be the master of the form. 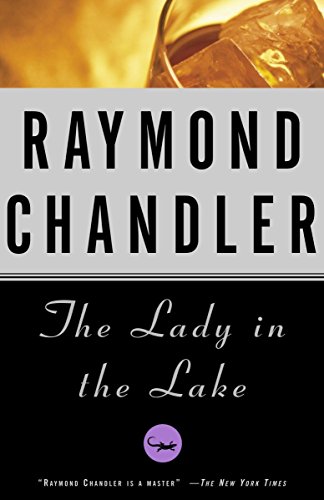 The Lady in the Lake
Buy Now