Review of The Return Man

The Return Man by V. M. Zito is a combination of a post-apocalyptic zombie survival story and an international espionage thriller.

After and outbreak that turned a large population into ravenous undead, most of the uninfected United States populace has retreated East of the Mississippi River into a fortified police state. Henry Marco, however, has remained in his home in Arizona where he survives on his own against the undead while searching for his missing wife and take clandestine contracts from American east of the Mississippi to locate their zombified loved ones and “return” them to death. When his illegal activities are discovered by Homeland Security, he is coerced into searching for his missing colleague, a neuroscientist who was working on a medical counter-measure to the Resurrection infection that turns the dead into zombies.

Meanwhile Kheng Wu, an operative for the Chinese government, manages to intercept the communication to Marco and begins his own hunt to track down the “Return Man,” recover all relevant data from Marco’s mission, and bring it back to China after eliminating all loose ends. In the desolated American West of the zombie apocalypse, though, both men are forced to collaborate if they are to locate their target while struggling against not only the reanimated dead but also against marauders and criminal opportunists out to take what they can in the lawless sections of the country.

The Evacuated States of America

One of the best elements of this novel is that every one hundred pages or so a surprise pops up that alters the dynamic of the book. The early scenes of Marco on a contract and surviving against the zombies set up the reader only to have the audience surprised when a Chinese Secret Agent come into play. Every time the reader believes he or she has a handle on the book, it changes direction, so the story stays interesting at nearly every turn. Granted, some developments are tropes from particular genres like horror or survival stories or international thrillers, but their combination is unique to the point where even something that seem familiar from another genre—like a prison hospital full of zombies—takes on a new dimension given the context.

Both Marco and Wu are solid characters, too, with fleshed-out motives for their actions. Marco is haunted by the loss of his old life, while Wu does his best to fulfill his duty and endure an hostile, alien environment. As more of their characters are discovered over time, the audience becomes invested in their actions, even when they are working at cross-purposes. This development leads to an interesting tension in that ultimately they cannot both succeed, and the reader remains anxious as to which of theses characters will triumph even as they are forced to rely on each other for stretches at a time. The dread of inevitable betrayal colors their interactions. Similarly, both men are only moderately adept at navigating the zombie-blighted American Southwest. Marco was a physician and has managed to adapt to his new life through reading old magazines and books on survival, trial-and-error, and a helping of luck. Wu was trained for infiltration, espionage, and targeted killing. Neither man is really an indestructible action-hero type, and their troubles and occasional fumbling give another level of tension to their interactions. Also, Wu’s peculiar, Taoist understanding of the zombies is an interesting twist that sets him ideologically against the rational, scientific outlook of Marco, and makes him one of the most interesting characters in his choice of how to handle the undead. An observant reader will question some of his actions, but his explanation later in the story is really a novel understanding of the living dead.

The Return Man has a lot to offer readers. Its take on the zombie apocalypse scenario is different enough from the standard to keep readers interested even if Zito didn’t throw in new twists from different genres with some frequency. There is gore on the level of George Romero’s Dawn of the Dead and some secret agent action like one would expect from the Jason Bourne movies. The novel moves at a brisk pace and maintains conflict even when there aren’t zombies trying to chew the faces off the protagonists. Even readers who think the market is too populated with zombie stories should check out The Return Man by V. M. Zito. 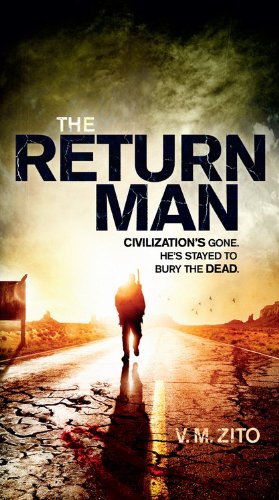