A Review of "Theodore Roosevelt: A Biography" by Henry F. Pringle

Dani is a college student with a love for dystopian novels, political poetry, and words that are too big to use in normal conversation.

There are few men in American history so well-loved as Theodore Roosevelt. Yet, to many of his closest contemporaries, he was all at once a lovable adolescent and political genius. He was the man's man of the Rough Riders, a devoted son to his parents, the strong advocate for social justice to his campaigners, and the strong and capable Mr. President to many. His life's story and work are presented well in the book Theodore Roosevelt: A Biography by Henry F. Pringle.

I picked this book up on a whim at my local library. I expected a dreary caricature of Roosevelt as a staunch military man but instead received a level-headed depiction of him as a real, blood-and-bones person. I was pleasantly surprised at the lightheartedness of Theodore Roosevelt. While it was an interesting subject, biography is such a difficult genre to master, but Pringle may have managed it. I enjoyed this book thoroughly, and apparently many others did too, as it won Pringle the 1932 Pulitzer Prize for Biography or Autobiography. In the sake of integrity, it is important for me to mention that I am reviewing the revised 1951 version of this award-winning book, but there were no major edits and the text is largely the same.

I enjoyed this book thoroughly, and apparently many others did too, as it won Pringle the 1932 Pulitzer Prize for Biography or Autobiography.

This autobiography covered Roosevelt's childhood with all the sentimentality of a favorite uncle. While I did think this work had a warm lean towards Theodore Roosevelt, it didn't whitewash his flaws. Pringle made quick work of any personal hypocrisies he found in Roosevelt's character and supported these ideas with evidence of the reader. For example, Pringle said that in 1884, Roosevelt's "attitude toward labor legislation indicates that he was both ignorant and prejudiced (pg. 55)." He made short work of any of the more colorful accounts Roosevelt made but offered egotism instead of malice as the reason for the hyperbole.

However, if you are looking for a critical text of the former president, this is not the right reference. While the author by no means shows us a stoic, flawless politician, there is clear admiration in his writing.

While I am by no means an American presidential historian, the pains Pringle made to ensure accuracy and fervent detail are apparent. As aforementioned, I read the 1951 revised version, without the comprehensive bibliography and footnotes, omitted for "sake of space" in the foreword. The main source of Pringle's extensive account was found in the presidential papers available at the Library of Congress.

The work is laced with snippets of letters and journal entries and most sources seem to be primary.

Theodore Roosevelt's layout is not perfectly linear and is focused by topic rather than purely by time period. If you are reading this work as a reference material, it can be somewhat confusing.

However, this work is supplemented by a 10-page index, allowing the reader to quickly find topics of interest. 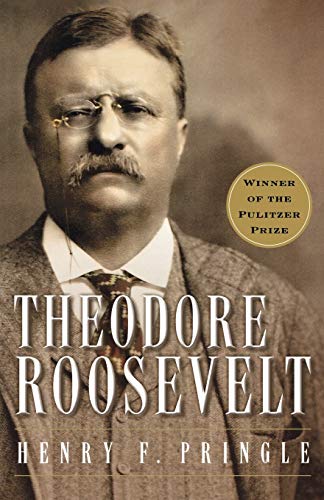 Originally published in 1931, this book still holds an interesting read for modern audiences. While it holds no real historical context, I couldn't help but chuckle at the references to Roosevelt's college years of the 80's and 90's and the author's insistence that his early boxing career made him something of a "dude." However, the colloquial tone makes the entire work seem like you're reading a thoughtful letter from a master on the subject rather than a hefty volume of educational worth.

All in all, Theodore Roosevelt is still as easily digestible as it was when it was first written. I would say that anyone reading at a university level could consume this book with ease and someone with a secondary equivalent would only be a few Google searches away from a complete understanding of all the vocabulary in the text.

Have you read Roosevelt's own "The Autobiography of Theodore Roosevelt"?

Theodore Roosevelt: A Biography by Henry F. Pringle offers a wide-lensed view of the American president and his iconic life. While it may not be the most comprehensive biography available, it is a great introduction.

Have you read this book or any other books by Henry F. Pringle? Were you satisfied with his depiction of Roosevelt?