Review of Tomorrow, the Killing

Years after the suspicious death of war hero Roland Montgomery, his sister, Rhaine begins to question the nature of his demise. Veteran and former investigator, Warden, gets drawn into her quest by the elder and dying General Edwin Montgomery and his own conflicted sense of guilt about Roland and their experiences during and after the Dren War. Against his judgment, Warden goes looking for Rhaine when she disappears all while he continues trying to fend off local thugs, maintain his strained relationship with his friend and business partner, Adolphus, find a reasonable tutor for the developing arcane talent of his foster son, and prevent himself from falling deeper into drug addiction.

Despite the fictional setting and the occasional appearance of magic, the novel is essentially a crime noir story about social injustice and corrupt human desires. The stratified society, prevalence of drugs and violence, the twisting of political movements to fit with personal ambitions, and a damaged narrator-protagonist form the core of the novel more so than many of the incidental fantasy elements. Warden has more in common with Dashiell Hammett’s Sam Spade or the Continental Op than he does with most protagonists of even contemporary low fantasy novels. Similarly, the story has echoes of Red Harvest, where one death too many ignites a campaign of justice that goes to some morally questionable places. In Tomorrow, the Killing, Warden has more personal motives for some of his actions, but he’d be at home in The Glass Key or The Maltese Falcon. A significant point of departure from most noir stories, however, is that Daniel Polansky does not include a femme fatale. There are some female characters, but they are secondary and largely lack the consistent agency one would expect. This means most of the novel’s action falls on Warden alone.

One factor that could be off putting to some readers is how Warden is in many ways essentially an unlikeable character. He has wit and determination and does care about a few other characters, even if he has significant difficulty expressing it. He is also, however, a paranoid drug user with self-destructive tendencies that result from deep psychological scars he refuses to acknowledge. He is also twisted by guilt at having acted, or not acted, in ways that result in the demise of other characters in both the past and present action of the story. As Warden tries over and over to convince the reader and himself that he’s hardened and doesn’t feel the weight of these deeds, his nihilism and tendency to implode or lash out at those people who do care about him, betrays his sense of loss and remorse.

In an interesting development, though, Warden and the other veterans of the Dren War are humanized through Warden’s recounting of his wartime experiences. The recollection of the boredom and terror and waste of life on both sides of the conflict do work to explain some of Warden’s attitude and behavior as well as Roland Montgomery’s activities after the war and the actions of the Veterans’ Association. They also fill in the detail of explaining the setting of the novel and providing context for the characters. In a way, this background information lends a sense of fatalism, wherein the reader sees how characters doomed themselves through ambition or careless choices years before the main action of the novel. This sense of pessimism, more than the story or setting, puts the novel in the same realm of fantasy fiction as George R. R. Martin’s A Song of Ice and Fire or the First Law novels of Joe Abercrombie.

Where Only the Dead Don’t Lie

While the characters, especially the protagonist, may rub some readers the wrong way, and the resolution to the plot may not satisfy an audience looking for closure to some of the longer-term conflicts, all-in-all Tomorrow, the Killing is a tight and thrilling novel. It should be recommended for anyone interested in non-traditional fantasy books or noir crime stories. The setting is strong motivating element in picking up this book and others in Polansky's Low Town series. 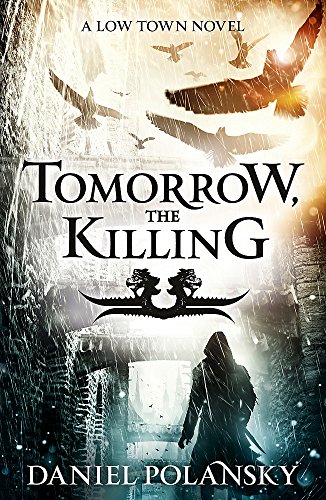