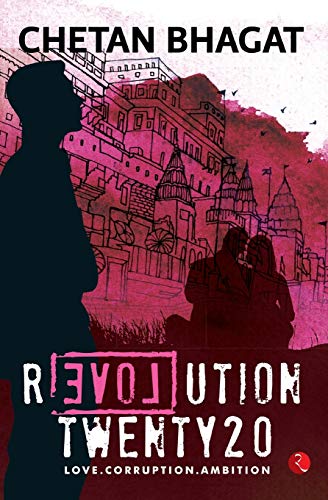 The storyline of ‘ Revolution 2020’, a new novel by Chetan Bhagat, revolves around a love triangle. Gopal, the narrator of the story, Raghav and Aarti are friends from their school time. All three are moving together but still carrying different ambitions and dreams. Since their school days, they were the best friends, but “Love, Corruption and Ambition” combine to bring differences between them.

There are twists in the tale as Gopal and Raghav both loved the same girl. Gopal comes from a middle-class family. He is the son of a retired teacher who sees ‘richness’ as his aim, whereas Raghav, who comes from well to do family, sees ‘revolution’ as his dream. Parents of both want them to become engineers, but they are moving to fulfil their own dreams. Aarti, the bureaucrat's daughter, wants to be an air hostess, but Varanasi, the city in north India where they all live, is too small for such ambition. She is beautiful and has all in her personality to be ‘a dream lady’ of anyone's dreams. She seems always confused on whom to accept as a partner or a friend.

The entrance exam for engineering makes the initial twist in the story. Gopal and Raghav prepared for exams. Raghav cleared it with his first attempt, whereas Gopal failed. His father sent him for preparation to Kota classes taking even loans, but luck did not favour him. While his one-year stay away from his hometown, Aarti and Raghav fell in love. He feels like nowhere, no admission in engineering, lost his love and ultimately his father.

The first half of the story is ‘no story’ as in the Indian context; everybody already knows what the author is telling. Lacs of students appear in entrance exams like JEE or AIEEE, and few get their target fulfilled. Teaching classes are part of big industry, selling dreams and making money. These coaching classes are mushrooming everywhere, in big as well small cities.

In the second phase, the story enters where all three childhood friends move further in their lives. Gopal got the opportunity, and with the help of a corrupt system, he became director of the engineering college. Raghav passed out an engineering degree, but his dream is in journalism, so he preferred to be a journalist. He thinks somewhere in his mind that he will unearth scams, corruption from society to start a revolution. Aarti is struggling to be an air hostess. Revolution 2020 shows few glimpses of a corrupt system in the education sector. Mushrooming of private colleges by corporate houses, politicians, and non-professional rich peoples. After failing to get admission to engineering college, Gopal, with the help of a corrupt MLA, starts his own engineering college. Throughout the whole story, the author has described corruption in our education system.

The whole story is loaded with scandals; sex, corruption, and a love triangle are there to make it a tale. Both friends are in love with the same girl. It adds rivalries between them. A famous quote from the novel that describes many things is, "Life is a bitch when the only woman you can think of belongs to someone else".

Most of the story took place in Varanasi except for some part in Kota. No doubt storyline is straightforward and depicts known facts of Indian society, but the book is still worth reading. Chetan Bhagat is a wonderful storyteller. The language has a good flow and easy to read. The author has been very successful in using current social/political situations in the novel affecting the overall progress of the story.

The novel's end is totally unpredictable and leaves the reader in a state of shock for few moments. You may disagree with such an ending like me as it is vague and overdramatic, perhaps inspired by Bollywood drama movies. It certainly has many weak points, but still, it's 'A must read'.