Riverside Writers are an enthusiastic and informal group who live and work on the Wirral Peninsula in Cheshire, England. They meet each month in West Kirby Library where they hold workshops, set group writing projects and offer constructive guidance.

The group was formed in 1998, and its members include published authors plus absolute beginners, people who are developing writing careers and people who write purely for fun. Non-fiction writers, poets and fiction writers of all genres are equally welcomed.

The group occasionally hosts public events, when members read their own original and diverse poetry and fiction to live audiences.

1) To encourage people to write.

2) To offer constructive, polite criticism of each others' work with the intention of improving writing skills.

3) To offer useful advice about the publishing industry.

4) To encourage use of the internet as a networking tool.

5) To provide a friendly and informal atmosphere where writers of all genres and abilities can socialise.

Map of West Kirby - Riverside Writers meet in the library next to the train station. 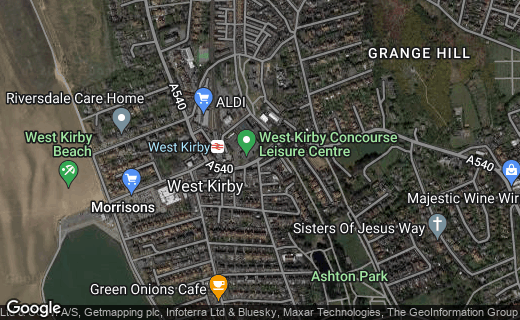 Get into Creative Writing!

I was closely involved with Riverside Writers from summer 2000, and was elected Chair of the meetings in 2003, a post I held until 2015 when I resigned due to moving house. The club is now Chaired by long-standing member Peter Caton.

To keep the group's focus on writing, rather than on merely talking about writing, each month Riverside Writers have a new project which involves producing a poem or short story--of any length or genre--on a set theme.

The theme could be an opening phrase, a particular location or a randomly-chosen group of words (such as piano, ballet shoe, bazooka, ufo.) Sometimes an unusual photograph is used as a source if inspiration, as with the photo of a tree in the middle of a forest which had been decorated with ladies shoes. Or perhaps there might be a set challenge (such as 'The Literary Chicken' in 200 words.) The theme serves as a starting point from which ideas can flow, and a person is totally free too take the idea in any direction.

At meetings, members read aloud our efforts from the preceeding month. Though all have begun with the same starting point, nobody ever produces a similar story. The sheer variety of responses to the projects is part of the fun.

No-one is obliged to join in if they don't wish to. Maybe that month they simply haven't had the time! But those who do participate regularly have found that their standard of writing has improved. Also, over time they develop a portfolio of work which they would probably not have thought of if they hadn't joined in with the monthly writing projects.

Blood-drinkers, killers and secrets. Old sorrows and new beginnings. The light and dark of human life set against the glittering backdrop of a reinvigorated city.

Introducing the 3rd anthology from Riverside Writers of Wirral! This FREE ebook, published in 2013, brings together a fabulous collection of original short stories and poetry.

Riverside Writers are pleased to announce the publication of their second anthology, which is available as a FREE ebook.

Romance, heartache, treachery and death! Eighteen stories and poems inspired by the sea, from a group of imaginative writers who live surrounded by water on the Wirral peninsula in England.

The idea for a second anthology was mentioned early in 2012, as the group had enjoyed working on the first one and wished to produce something similar. However, wider distribution was high on the list of wants - and so the notion of publishing it as an ebook was put forward.

The seaside theme was strong enough to bind the project together as a whole, yet open-ended enough to allow for the diversity of individual tastes and styles.

And here it is! Published in October 2012, the ebook has worldwide distribution and will remain FREE permantently.

Riverside Writers' first anthology brought together twenty-four original short stories and poetry. This group project, and was published in 2010.

The front cover was created by Carol Falaki, and the group's new badge logo was designed by Peter Caton. Andy Siddle has worked on the layout, and several other members have helped with proofreading - so it was very much a group effort!

Words From Wordsmiths: An Evening with Riverside Writers!

Have You Joined a Writers Group?