Satan in Book One

Satan is, perhaps, the most important and influential character in Milton’s Paradise Lost. Edward Pechter calls him “in many ways an impressively heroic figure” (164). Arnold Stein argues that “one need not choose between Satan's being a tragic hero or an absurd villain” (221). Satan’s character is unclear for the reader from the beginning when he is presented as a study in contradictions in Book 1: he is great and awful, powerful and proud. While he is “stirr’d up with envy and revenge” (Milton 212 line 35) he is also filled with “courage never to submit or yield” (Milton 214 line 108). Satan is “vaunting aloud, but rackt with deep despair” (Milton 214 line 125). Milton does not present Satan as simply evil; he is instead multi-faceted and complex.

Milton continues his study of Satan’s complexity in Book II where Satan is presented as a reflection of God. Satan is pictured “High on a Throne of Royal State” (Milton 232 line 1) while he argues with his followers, fallen angels. The argument can easily be seen as a reflection of God and his angels up in Heaven. The reflection is further enhanced when Satan’s followers bend to him as angels in Heaven would bend to God: “Towards him they bend/With awful reverence prone; and as a God/Extol him equal to the highest in Heav’n” (Milton lines 243 477-479).

Satan is compared with sun spots in Book III during lines 585 to 590. This is an interesting comparison for Milton to make on two levels because Satan can be seen as a blot on the Son (of God) and also a blot on the sun (something that God created for man). The duality of the image again showcases how Milton sees more than one level of Satan.

In Book IV, Milton’s previously views of Satan as a beautiful (if fallen) Angel are replaced with less appealing imagery, with Milton calling Satan “squat like a toad” (297 line 800) and “the grisly King” (297 line 821). Satan also begins to feel the need to justify his actions. “…conquering this new World, compels me now/To do what else though damn’d I should abhor./So spake the Fiend, and with necessity,/The Tyrant’s pleas, excus’d his devilish deeds” (Milton 287 391 – 394).

The comparison between God and Satan continues in Book V when Satan argues against the “knee-tribute” that God demands from his followers. Satan does not understand why Adam and Eve feel the need to offer thanks and worship; he does not think that they owe anything to God. This parallel’s Satan own desire to be worshipped by those he led from Heaven. He wants them to worship and praise him, and expects their obedience. This is shown again in Book VI when Satan and Abdiel argue over Satan’s rebellion against Christ. Abdiel, like Adam and Eve, believes that God is worthy of praise and “worthiest to be obeyed” (Milton 328 line 185).

Finally, in Book IX, Satan admits that he is afraid. Unlike the brave warrior who fought with Michael and Abdiel, Satan is suddenly a fearful minion. He must sneak around, turning into mist and avoiding being caught. Satan finally admits that he is no longer able to enjoy anything: “I in none of these/Find place or refuge; and the more I see/Pleasures about me, so much more I feel/Torment within me, as from the hateful siege/Of contraries; all good to me becomes/Bane” (Milton 381 lines 118 – 123). Satan can not find pleasure, but he can inflict pain on others. It does not ease his suffering, but it does help to ease his “relentless thoughts.”

Do you think that Milton intended to portray Satan as evil, misguided, or tragic?

In the end, Satan is turned into a serpent as seeming revenge for his actions when he tricked Eve. Satan claims that “spite then with spite is best repaid” (Milton 383 line 178), but it appears that God is truly the one who repays spite with his actions towards Satan and the fallen angels. The reader is left wondering if Satan is indeed a heroic figure and not just the simple villain that he is normally portrayed to be. The complexity and contradiction are shown throughout the books of “Paradise Lost” through comparisons to God and Satan’s own actions. 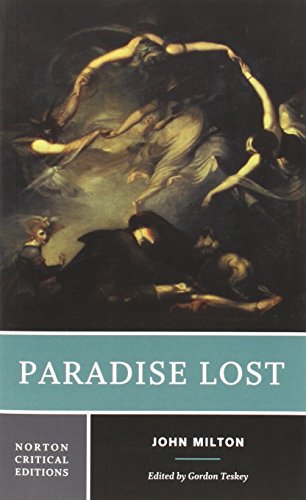