Any Night Can be All Hallows Eve, if You're in the Mood for a Scary Story...

Soon it will be dusk. Little ghosts and goblins will scamper through the streets, calling out their rhymes. Doorbells will ring, and childish voices will pipe, "Halloween apples, trick or treat!" Generous neighbors guarantee the little ones carry away a surfeit of sugary treats.

Once the wee ones are safely abed, it will be a time for our frolic. What could be better on a fall evening? Crunching leaves underfoot; the crisp scent of ripe apples hanging in the cool air. The tang of wood smoke beckons you to pull up a bale beside the crackling campfire, and warm your hands around a steaming mug of cocoa or cinnamon-laden cider.

The branches on the old trees around the clearing are almost bare of leaves. Those that are left cling together, rustling and whispering in the evening breeze. The branches clatter and squeak as if answering the chattering leaves - a perfect night for a Halloween legend.

The Old Woman in the Woods

It's a very, very old story, and though this may not be exactly as it all happened, this is a true story.

Have you ever watched the northern lights, the way they flicker and shine, the way they sometimes dip down to kiss the earth as if looking for something? Have you ever heard a faint crackle in the night air as if they were whispering a secret?

There was a hunter - very brave and very strong. He was a good hunter, and kept his village well supplied with meat and skins. His tribe was well-fed and warmly dressed in the coldest winter. Their trap lines were always filled, and the pelts they took were of the finest quality.

Then, gradually, things began to change. Wolverines attacked their trap lines, killing the game and mangling the pelts. Wolves chased away the deer and caribou, and the villagers grew hungry.

"Something must be wrong," they murmured to each other. "What will happen when we have no soft furs to keep us warm through the long winter? We will surely die of cold and hunger."

The village elders called everyone together. "Someone must go to the Old Woman in the Forest, and ask for her help," they said. "Who will go?"

The elders waited, but no-one spoke, no-one moved, no-one even raised their eyes. Everyone was afraid of the Old Woman in the Forest. No-one even dared to speak her name.

Finally, a young boy raised his head and looked around at the villagers. No-one would meet his eyes. Then he looked at the elders. "I will go," he said.

The young boy's mother cried out. His grandmother began to wail. His sisters wept copious tears.

"I will go with him!" The hunter pushed forward through the crowd. "We will find the Old Woman together."

The night was dark and cold. Winter had come early that year. The snow lay thick on the ground, muffling their footfalls. A bitter wind tossed the branches overhead and moaned through the dry leaves like a lost soul searching for redemption.

Man and boy passed silently along the trail, the boy following, placing his feet carefully in the hunter's footprints. Their breath trailed behind them in puffs of white, whipped away on the wind. On and on, deeper and deeper into the forest they went.

Finally they came to the edge of a great cliff. Far below them, the pack ice, already rafted and hummocked, stretched out as far as they could see. Behind them, the towering forest trees seemed to close ranks, forbidding their return.

"We wait," said the hunter. He sat down. The boy sat beside him, and they stared out over the frozen sea.

For two days and nights, the man and the boy waited. As the pale sun peeked out on the third day, an old woman shuffled slowly out of the forest towards the pair.

Bundled against the winter's chill, the old woman was stooped and haggard, clutching a thick cudgel in her claw-like hand. Her pallid skin was blotched and wrinkled. Whisps of faded, straw-like hair stuck out from under her hood.

"What do you want of Old Oomak?" she rasped. Her voice crackled and wheezed in the freezing air.

The boy jumped to his feet. "Our village is dying! Please, will you help us?"

The old woman turned her head slowly to stare at the boy who shrank away from her stoney gaze.

The hunter stood, bowing respectfully to the old woman. "Please, Oomak, the boy speaks the truth. Will you help us?"

"There will be a price," she replied, turning her head to one side, peering at them from hooded eye-lids like some great, aged bird. "One of you must stay with me and be my husband - forever."

"No," said the old woman. "Return to your village. The boy will stay with me. If you ever come back, I will flay the skin from your bones and feed your liver to my wolves."

A sudden fierce wind threw up a great blast of snow, blinding the hunter. When the snow cleared, Oomak and the boy were gone.

The hunter returned home with a heavy heart. The village had been saved, but at a terrible price.

After a time, the village prospered once again. The trap lines were full, the deer and caribou returned. Hunting was good. There was plenty of food and there were warm furs for everyone, and the boy's sisters stopped crying. His mother continued to grieve though, and his grandmother eventually died of a broken heart.

Finally, the hunter went to the village elders. "Every night I dream about the old woman," he said. "Even if she kills me, as she promised, I must return and try to save the boy."

The elders nodded, knowing the hunter would go anyway. "Yes, you must try to save the boy, but do not anger the old woman against us."

The hunter left the village and walked into the forest. This time, though, he could barely see the trail. A howling blizzard raged for three days, blinding the hunter with flying snow and freezing winds, but still, he pressed on.

At long last, he arrived at the cliff edge and found the boy, sleeping peacefully in a nest of warm furs while the northern lights danced in the night sky.

"Wake up," cried the hunter. "You must run away before the old woman comes back." He pulled the dazed boy to his feet and pushed him towards the forest. The boy broke into a stumbling run and vanished among the trees.

In that instant, the dancing lights winked out. The old woman flew screaming down from the sky on a black thundercloud, her furs streaming behind her. She stretched out a taloned hand and in one, slashing blow ripped the hunter's skin from his body, and tossed him down to the pack of wolves that howled in her wake.

Oomak tore though the woods, shrieking for her boy-husband, crying vengeance on those who had stolen him away. The great storm that followed her passing wiped away every trace of the boy's village and every last soul who lived there. It was as if they had never been.

The boy was never seen again. It is whispered he, too, was lost in the great storm, killed by Oomak's anger, and that the old woman still rides the night wind, looking for him.

Sometimes, when you see the aurora dancing overhead in the autumn's chill, you can hear a faint whisper on the wind. Stay out of the woods. It is Oomak, the old Woman of the Forest, still searching through all eternity for her lost boy-husband. 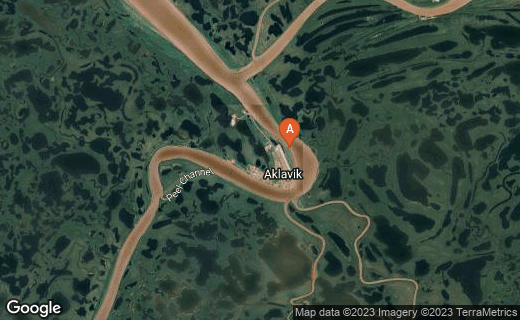