Short Review of Carlo Ginzburg's "The Cheese and the Worms"

The Cheese and the Worms: The Cosmos of a Sixteenth-Century Miller was originally written in Italian by the microhistorian Carlo Ginzburg in 1976. It was assigned to me to read by my historiography professor, and I was taken away by this wonderful book. It is, as Gilderhus states, "a study of religious heresy among common people in Italy," specifically during the time of the Roman Inquisition in the second half of the sixteenth century. I enjoyed reading this book, and so here is a quick overview of the book itself and the ideas it represents.

Ginzburg's book is a great example of microhistory- focusing in on a single person to get a feel for the society at the time that person lived. Menocchio proves to be a very interesting character as well, deviating from the established norm set down by the Church. Ginzburg begins by introducing his miller, who then proceeds to explain all his various heresies, which of course earns him special attention and treatment by the church! This, of course, only serves to strengthen his discontent at the church's rule over the laity.

One of the heresies that was spoken of was his questioning of the virgin birth, which is where most of his problems seemed to begin. Many of his other beliefs are also related to this, including his statement, "Everything that we see is god, and we are all gods," (p4). It does not end there, as he speaks out against the church as well. Menocchio stated that the church's use of Latin in service only helped to keep the common people under their "thumb," always reliant on the clergy and other learned people.

However, by far Menocchio's greatest heresy was his analogy of the world, God, and the angels to that of cheese and worms; it's from this idea, of course, where Ginzburg pulled the title for this 130-page microhistory. Ginzburg too does a fine job of relating this to his readers. Menocchio tells us that, "in my opinion, all was chaos, that is, earth, air, water, and fire were mixed together; and out of that bulk a mass formed- just as cheese is made out of milk- and worms appeared in it, and these were the angels," (p6) and he goes on to explain that god was created at the same time out of the same mass as the other angels, only he became the lord of angels and was the greatest of them. Ginzburg quotes Menocchio as closely as posisble several times throughout the chapters, and then provides a simplified version of his own; an explanation of sorts to this worldview. He relates too the origins of Menocchio's thoughts to the wide selection of books and sources discovered in the miller's home during the Inquisition. However, Ginzburg further states, "More than the text, then, what is important is the key...a screen that he placed between himself and the page," (p33).

Ginzburg tells us that Menocchio's beliefs do not necessarily come from the books themselves, which are listed on pages 29-30 of the Tedeschi translation, but the ideas that Menocchio draws from them, seeing and reading only that which he wants to pull from the page, not necessarily the ideas that are presented. By doing this, Ginzburg does a good job of painting a clear picture of not only his miller's life but the society as well. However, Menocchio, it should be remembered, was a rarity of his time, a common man but one who was capable of reading and thinking more than just what the priestly class taught, and that is a fact not necessarily stressed in the book. It should have been made more clear because, while Menocchio was certainly not a high-class merchant, he was not exactly amongst the lowest peasantry. He was a miller, which he himself states was a very social and travelling career- one in which the miller dealt with all levels of society of all levels of literacy. As a miller, and a learned peasant, he had access to that which the majority of the low class did not; therefore he was able to "think" for himself rather than have the clergy "think" for him.

Despite this small lack of detail the book is well-written and wonderfully, thoroughly researched, giving us a small peek through a window into the past of 16th century life, during a time when religion reigned, and those who questioned that religious rule were considered dangerous. 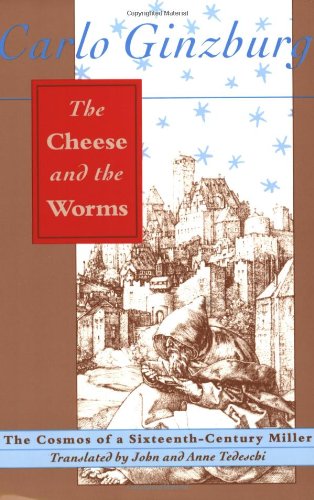 The Cheese and the Worms: The Cosmos of a Sixteenth-Century Miller
Buy Now