A Review of Musui's Story

Most of the readers who read Musui's Story: The Autobiography of a Tokugawa Samurai (written by Katsui Kokichi and translated into English by Teruko Craig) probably aren't reading it for its literary appeal. Instead, they're reading it because it was assigned in their world history class, or East Asian history class, or Japanese history class, or because they're interested about learning about 19th century, pre-Meiji, Japan. There's a good reason behind this : the book is a very good historical source. Few other books cover Japanese history during this era in quite the same way, from the perspective of a roguish samurai, and Katsui Kokichi, the original writer of the story, gives us a fascinating view into Japan's history during this crucial juncture. If you're interested in historical aspects of the story, see the link below.

Musui's story covers around 40 years of history, from Kokichi's young childhood to shortly after his "retirement" (actually the transfer of his role as head of the family to his son, who was at the tender age of 15 - actually 14 due to the way East Asian age numbers work).The original work was not divided up into chapters, but subsequent works by Japanese academics have divided it so, as well as other projects like adding in previously missing punctuation. The chapters, and their continent, are now in contemporary style.

It is an irony of this book that Kokichi starts out by writing about how his life was a failure, and that one shouldn't follow in his footsteps but instead be a good government official. While not directly related to the story-line, it does make for a fascinating look into what "normal" social mores in Japan would have looked like during the period.

Much like in the rest of his life, Kokichi is something of a hell-raiser in his childhood. His escapades at the judo, his conflicts with other children, his abortive attempt to commit harakari after being beaten in a fight (it comes off as more comic than serious), his disputes with his grandmother...

The big break occurs when Kokichi runs away from home, with a vague plan to head towards Kyoto. At this time, he was only 14 - actually 13 in the Western age-counting system. His adventures along the way rapidly make a turn for the worse, when he is robbed. He is forced to make his way as a beggar, falling ill repeatedly and running into serious problems, but managing to scrape by, getting nearly adopted by families a few times, stealing, and ultimately arriving back home.

Kokichi's family doesn't punish him for his escapades, and he applies for official service, the typical occupation of a Tokugawa samurai. If by this point you are somewhat doubtful about his ability to hold down a job... you'd be right. Kokichi is not hired. He has trouble even writing his name. He makes a much more intriguing discovery : the pleasure quarters of Yoshiwara, and he steals quite a large amount of tax revenue to fuel his travels there, and spends it quickly. His normal escapades with fighting continue, as he and his friends wander around to seek out trouble.

I Run Away Again

Apparently feeling little compulsion to stay with his family, or with his wife, Kokichi decides to run away once again, after being thoroughly bankrupt. At the still rather tender age of 21 (again, 20), he departs from home.

This time, his family is not so pleased about his return. Upon his arrival back in Edo, he is locked up in a cage for 3 years. Amazingly, he says that he didn't feel chagrin at this, something I suspect to be a lie. He took this time to finally teach himself how to read and write.

Now released from his cage, Kokichi seems to have taken rather little of the lesson to heart, despite his claims otherwise. He supports a religious association and its growth, but runs into serious fights in his typical manner over petty squabbles within it. When his son falls ill, he is very devoted and works hard to attempt to help him recover, one of the few very kind actions we see out of him. In the end, his son does survive. Money problems come and go, and he worked as a sword salesman. Conflict with his family is not unknown, and in the end, upon their urging, Kokichi sunders his family mandate to his son, then at the thoroughly ancient age of 15.

Having sundered his family control, Kokichi "retires", which seems to impede his ways not a bit. This involves stealing money, lending money at high interest rates, continuing to be his neighborhood's de-facto boss, and his efforts to help his landlord Magachiro, from his overwhelming debts. This both involves dealing with a corrupt accountant, and then trying to get the money needed from the village that he held as a fief. This is a great adventure, and one where Kokichi is eager to relate to us how he succeeded thanks to his skillful use of personal connections, daring, and wit.

Apparently not including them as part of the rest of the flow of the story-line, he also includes several stories relating to a scam artist, a singular story where he had tasked his wife to acquire a concubine for him! (he rapidly comes to his senses), and another fight he was involved in.

The reflections at the end is rather similar to the preamble.

One of the most fascinating things in this work is that it reads very much like a memory, like a stone which skips across a pond, alighting upon singular events and then travelling forwards, but always in a fashion which is so elegant and fast that one can't truly determine that it is doing so. Since this book covers some 40 years of a very busy life, in a mere ~150, not very lengthy or small print, pages,necessarily it is necessary to economize, but it goes behind this. Consider the 5 year period between when he returned home after the first time when he ran away, and the second time he ran away. The text recalls events which happen during this time period - his attempt to apply for bureaucrat service, stealing money, fighting,training, tax collection, the comically short entrance of him being married - but it is difficult to see how the 5 years elapses, as time flows and pauses in sinuous movements. And this is relatively more detailed than other sections! The reading of it is fascinating to see this way that the story is written in progress.

In saying all of this, an incredible amount of praise must be heaped upon whoever translated this volume. Speaking from personal experience, it is tremendously difficult to manage to translate a text while maintaining the spirit of the original and not erring in an excessively technical and literal translation. I imagine that it would be even harder for this text, which is written in archaic Japanese, in a thoroughly local dialect, and with limited literacy. Despite this, the translator Teruko Craig has managed to turn out a highly readable work, which makes what seems like would be a reasonable approximation of the original author come through.

The most important story in Musui's Story, is Kokichi himself. Kokichi is a complex man. He is obviously an extremely charismatic individual, and intelligent - after all, he manages to get into adventure after adventure and yet comes out victorious in the end, at least as he relates to us. He also isn't inherently a bad person : he does display kindness at times, such as his treatment of his son when he falls ill, he will always repay a favor in the end (and views a failure to do so as an unforgivable excuse) and he is even looked up to by whatever community he resides in. He also (generally), is kind to peasants, with the exception perhaps of the final moment when he essentially robs the peasant village of Goganzuka, for a small fortune. Some of his flaws are covered up by the time that he lives in : yes, he does beat his wife for example, so much that it impinged his health, and yes, he was sexist, so far that he intended to have his wife go and get a concubine for him, and he paid little attention to women in general. But these were also aspects which were accepted social mores of the time, and as much as it might be pleasant to have everyone in history live up to our own social standards, that is hardly the case. But even by the standards of his own society, Kokichi is something of a ne'erd do well. He never gets a real government job - which any samurai aspires to - he shows little filial piety, he runs away from most problems that can't be solved with a sword, he steals and engages in corruption, and has a tendency towards self-glorification. Good or bad person? Probably neither - Kokichi is a complex person with some strong traits and some negative ones, and this shows through in the text. It makes for an intriguing read, presented by the author about himself.

Unfortunately, beyond the author, other readers are much less developed. Perhaps it does have something to do with the author's transient nature, but he never makes lengthy and enduring connections with others that follows him throughout the book, and in the nature of the writing style most of the people that he engage with pop into existence, then vanish almost as quickly as they arrived, or at most stay around during one of the book's chapters. Only Kokichi himself has any real character depth, and he moves like a solitary individual throughout his world.

Musui's Story is readable, packed full of interesting scenes, well supplied with drawings and maps, and has a fascinating writing style. As far as a novel goes, the relative lack of secondary characters reduces it somewhat in my opinion, although this might be just my opinion - I like a complete cast of secondary characters. So too, sometimes the litany of fights that Kokichi is involved with can drag a bit. Kokichi himself is hardly a picture of unmitigated good that should always be supported for, but this is a good thing, not a bad thing, from the perspective of a complex plot. Readers who enjoy this type of book are above all else those interested in history - historical fiction would be a common enough cross-over - but those who are interested in adventures, even comedy, would find it interesting as well. The book is overall a very intriguing novel-esque read which makes for entertaining reading beyond just its historical context, and a good selection for any historical fiction. 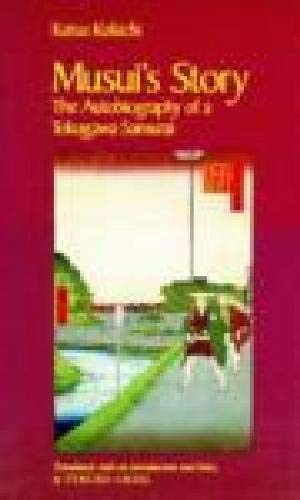 Musui's Story: The Autobiography of a Tokugawa Samurai
Buy Now