Solomon Naumovich Rabinovich, better known under his pseudonym as Yiddish author Sholem Aleichem, was born on March 2, 1859 to a wealthy Russian merchant and his wife.

Sholem became famous for writing the short stories of "Tevye the Dairyman" which became the foundation for the movie "Fiddler On The Roof." He was dubbed the Yiddish Mark Twain early on in his writing career.

Children: 4 daughters, 2 sons. A son died from tuberculosis in 1915. His daughter Lala was Bel Kaufman's mother.

Most Famous Works: "Tevye the Dairyman" stories (Fiddler On The Roof), and a short story which was the basis for a 1991 movie called Get Thee Out!

Kindle Version "Tevye the Dairyman and The Railroad Stories" 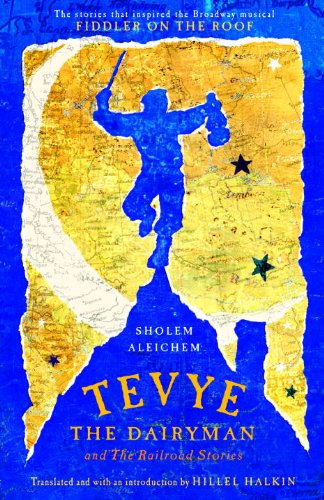 If I Were A Rothschild

Sholem wrote a poem called "If I Were A Rothschild."

Rothschild was the name of a wealthy family of the era. Music was put to the poem and to avoid any lawsuits, the name Rothschild was eliminated and the song became "If I Were A Rich Man" for the movie "Fiddler On The Roof."

It was also the highlight of the 1964 Broadway musical stage play that had audiences humming it as they exited the theaters. The play ran for 3,242 performances over eight years, setting a record for the longest running production on Broadway.

It was retooled several times for the stage and big screen, but the most famous one most people remember was the 1971 extravagant Hollywood musical film production. It was made in an era when the movie studios were trying to outdo one another by turning out several musical films per year, each one bigger than the last. Ah, but I get ahead of myself.

Performance: If I Were A Rich Man

In 1872, Sholem's mother died in a cholera epidemic and his father quickly remarried so his two children would have a mother. His stepmother was a real colorful and outspoken character.

Due to his exposure to her, Sholem's first writing effort at age 13 was an alphabetical glossary of his stepmother's saucy and sometimes embarrassing epithets. It was then that he began using Sholem Aleichem as his pen name, which when translated means "peace be with you."

Supporting Himself, Then A Family

Shortly after Sholem's first birthday, two big events happened in his life. His only sibling, a sister named Emma was born, and his father lost his vast fortune on a poor business investment, never to regain his footing again.

The small family of four lived in abject poverty on the outskirts of the city of Kiev throughout Sholem's childhood. In about 25 years, Sholem would repeat his father's mistake.

At age 15, he wrote (under his pen name) the Jewish translation of Robinson Crusoe which was published in several Yiddish newspapers as a weekly serial for a few months.

From 1873 through 1877, Sholem submitted essays and short stories to Yiddish newspapers and they gladly published his work ... they just didn't pay him very much money. Due to his weekly newspaper stories, he developed quite a following with the public, but he still wasn't able to support himself enough to leave his father's home.

In 1877, at the age of 18, using his good penmanship as his best credential, he answered a Jewish landowner's advertisement for a personal secretary who would also be a Hebrew tutor for his one child, a daughter named Olga Loev, age 11. However, by 1882, the 17 year old student and 23 year old teacher fell in love, prompting her father to banish Sholem from the estate.

True love won out nearly a year later when Olga turned 18 and they were married on May 12, 1883. Her father gave him the obligatory large dowry, but he didn't like it one bit.

Despite being estranged from Olga's parents after their marriage, the couple was very happy and raised six children. After the dowry was depleted, Olga's father suddenly dropped dead and the couple became solvent again when they inherited a good deal of her father's wealth.

At age 26, Sholem was able to give up his career as a Hebrew essayist and dedicate his full time to his passion - writing Yiddish short stories and plays.

Unfortunately, he used his new-found wealth to invest in the stock market. Like his father before him, Sholem made some bad calls and lost all of their money in 1890. His poor business sense followed him his whole life so that he was often in debt and running from creditors.

Tevye The Dairyman by Sholem Aleichem

He Wrote In Yiddish And His Audience Loved It

Sholem's work was very much in demand because he wrote in Yiddish, and people enjoyed reading books in their own language. There weren't that many Yiddish authors in those days, much less Yiddish authors who were talented writers.

In between his own creations, he made extra money translating the works of famous writers like Tolstoy and Chekhov from Russian to Yiddish. Jewish people couldn't get enough of his books to pass on to their family members.

At that time, writers were finding no problems getting published but they were being paid a pittance. He could barely support his family, even though he wrote many essays for Yiddish newspapers and magazines, published over 40 essay anthologies between 1880 and 1887 and at least one short story anthology per year.

Sholem started a tradition which his readers grew to expect. Every year until his death, he published an anthology of Yiddish stories, followed by road trips of many engagements to do public readings. This was a man who was much loved by his fans and his countrymen, but his finances were typical of the writer's life ... his income was never much and it was never steady.

He was to remain dependent on the kindness of others to pay him for afternoon gatherings to read his stories aloud, until 1895, when his mother-in-law finally paid off all his debts and he moved his family back to the burgeoning city of Kiev.

His stories ran weekly in Yiddish newspapers and by 1908 he became a household name but he was still wealthy in fame only. Money was scarce because of the economy and he often went either unpaid or underpaid.

During the Russian Revolution, Sholem Aleichem wanted to move his family to America, but he was only able to afford passage for himself. So he sent his wife and children to Geneva Switzerland and he moved to New York City in America to get work. After two years, he could no longer support two households, so he moved to Geneva to be with his family.

Tevye The Dairyman was a book of short stories on which Fiddler On The Roof was based.

Keeping traditions alive, remembering one's heritage, while trying to live in a modern world set the stage for future works like: the Roots saga, North And South (Civil War era), The Color Purple, a number of Holocaust movies, Rich Man-Poor Man, to name a few.

Movie Review of Fiddler On The Roof

Sholem Aleichem loved to put a spin on sayings. He liked using idioms, and had a special place in his repertoire for the curses of a Jewish housewife. I guess he got that as a child from being around his new stepmother.

Sholem created characters who spoke for themselves. He used letters, notes and memories of characters to tell their story. He liked monologues but he also liked to show his characters playing off each other in dialogue. His readers could identify with his characters because he made them seem real, with real problems and real lives.

An anxious father, a despondent mother, a man seeking his fortune in the New World, a family who suffers from a father's bad decision investing in a get-rich scheme ... all were everyday crises that could happen to anyone and they were the backgrounds for his stories.

In the Tevye The Dairyman stories, Tevye constantly talks to God about his problems. He discusses when the Czar tries to take away his property and he tells of feeling at a loss when each of his daughters make decisions that go against what he feels is right for them.

An integral part of the "Dairyman" stories is Tevye's ongoing dream to return to his homeland of Israel, but he knows in his heart that he never will. He takes comfort in his dairy business and uses humor to waylay his fears and to conquer each crisis.

Jewish traditions and humor run throughout all of Sholem's works and it was the way he wrote about tradition and humor which kept his readers coming back for more. That, and the fact that all his works were written in Yiddish, their language of choice.

What more could his readers ask for?

From The New Movie About Sholem's Life, With Voiceover by Granddaughter Bel Kaufman, Author of Up The Down Staircase

In late 1908, Sholem went on a very busy lecture circuit. Some days had multiple engagements during a 16 hour day. It was a grueling schedule that came to an abrupt stop in 1909 when he fell ill with hemorrhagic tuberculosis. For the next four years, Sholem lived as a semi-invalid, and his family was dependent on donations from friends and fans.

By 1914, Sholem's tuberculosis was in remission. He was healthy enough (and solvent enough) to be able to move his family from Geneva to New York City and pass the health inspectors. Of the group, his son, Misha was denied entry because he had acute tuberculosis so he was sent to live with Sholem's sister Emma in Geneva, where he died in 1915 at the age of 25.

A year later, Sholem became ill again with hemorrhagic tuberculosis and on May 13, 1916, he died at the age 57.

People came from miles around to attend his funeral, estimated at near 100,000 people. The following day, his Last Will and Testament was printed in the New York Times. In it were not only directions for his funeral, (and very few bequeaths) but instructions to family and friends that one of his merriest stories was to be read every year on the anniversary of his death.

"Let my name be recalled with laughter, or not at all," he wrote.

Bel Kaufman, his granddaughter and author of the book "Up The Down Staircase" and her second husband, Sidney Gluck, run the Sholem Aleichem Memorial Foundation which maintains his works and fulfills the wishes of his Last Will and Testament.

To this day, celebrations are held at the Brotherhood Synagogue on Gramercy Park South in New York City and are always well attended. His public loved him and he loved them.

Age 57 is not young, nor is it considered old. So I hesitate to say Sholem's success was cut short at age 57 because even today in 2014, "Fiddler On The Roof" is still successful and enjoys sold out performances.

Without his "Tevya The Dairyman" stories, there would have been no story of a fiddler.