Superman - The Most Important Key Issues

Superman The Man Of Steel has been in the public conscience since 1938, lets have a look at what comic book issues and story lines are most important in his history.

Action Comics # 1 is not only the most important issue in the history of Superman but arguably the most important comic book of all time. Created by Jerry Siegel and Joe Shuster, Superman is seen for the first time in this issue, it is considered by many to be the beginning of the superhero era and the book is the only comic book as yet to reach a value of over $2 million. In this early version of Superman he does not fly but is able to outrun a train and jump buildings with a single bound. Superman's girlfriend Lois Lane also makes her debut in this issue and Superman also takes on the alter ego of Clark Kent although no explanation is given in this issue as to why. 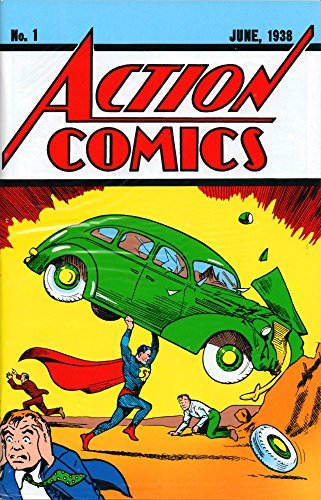 Released in June 1939 Superman # 1 is the first issue in what would be an ongoing monthly publication featuring the adventures of Superman as well as his exploits in Action Comics. Superman's adoptive parents Jonathon and Martha Kent make their debuts in this issue. This book fans out the origin of Superman and explains how he ends up working as a reporter for the Daily Star ( later to be known as the Daily Planet ).

From issue 2 this series would take on its more familiar title of Worlds Finest Comics. Worlds Finest was a series that ran from 1941 - 1986 it featured the adventures of Superman alongside Batman and Robin. The early issues of the series had Batman and Superman appearing in separate stories but from issue # 71 1954 they appeared together in the same stories.

Superman's best known enemy Lex Luthor makes his first appearance in Action Comics #23. Luthor has no super powers but is one of the smartest men alive and trusts in his knowledge of technology and his own super intelligence to plague the man of steel over and over again.

Kara Zor -El ( Supergirl ) makes her debut in this issue of Action Comics from 1959. It is revealed in this issue that Kara like Superman is a survivor from the Planet Krypton and is the cousin of Earths superhero and shares similar powers to the man of steel but like him also has a vulnerability to Kryptonite.

In issue # 30 of Superman we get our first look at Mr Mxyzptlk an imp from another dimension. Although not inherently evil the imp goes out of his way to cause mischief and mayhem in Superman's life. Appearing every 90 days Mxyzptlk enjoyed playing bizarre tricks on Superman like causing alterations to his physique for example aging him or making him obese. The only way for the Man Of Steel to rid himself of the annoying entity was to force the imp to repeat the name Superman backwards ie man rep us.

In this 1945 issue we are introduced to the teenage version of Superman, Superboy. From issue # 108 of More Fun Comics all ongoing superhero stories were moved to Adventure Comics as More Fun continued as a humor title. In Adventure Comics # 247 1958 Superboy would encounter The Legion Of Super- Heroes for the first time. The Legion were a group of teenage time travelers with super powers who recruit Superboy into their group, although only meant as a one off story the Legion proved so popular with readers that their stories were printed throughout the 1960s and they still often appear today.

Superman # 199 1967 features the first race between Superman and The Flash ( Barry Allen ). As a favor to the United Nations the two super heroes agree to race in order to raise funds for poor countries, after hearing of criminals trying to cash in on the race the two heroes agree to draw the race in order to foil the criminals dastardly schemes. The Superman / Flash race would become a feature in future issues of Superman, The Flash and Worlds Finest and other comics, usually these contests would end as draws but occasionally The Flash would come out on top.

Showcase was a series of comic books that ran from 1956 to 1970. The series was used by DC Comics to gauge the interest of readers in new or familiar characters to see if the character was capable of featuring in their own series. Issue 9 in the series featured Lois Lane the ace reporter who had become the love interest of Superman. Sales of the issue were enough to convince DC to give the character her own series starting with Superman's Girlfriend Lois Lane # 1 1958. The series proved very popular and ran for 137 issues until 1974.

Although making an unnamed cameo in issue # 6 of Action Comics, cub photographer Jimmy Olsen makes his named debut in Superman # 13. Proving popular with the readers Olsen was given his own comic in 1954 Superman's Pal Jimmy Olsen which ran for 163 issues until 1974.

In 1992 DC released a comic that told of the battle between Superman and the unstoppable killing machine Doomsday, the story ends with both combatants dieing from their terrible wounds. The story was a huge success selling out overnight. Of course like almost all comic book characters Superman is not dead for long.

Action Comics # 7 is one of the most valuable Superman comics as it is Superman's second cover appearance.

This issue introduces us to another one of Superman's powers X - Ray vision.

Perry White the editor of the Daily Planet is seen for the first time in this issue. Editor White employs Clark Kent, Lois Lane and Jimmy Olsen, a newspaper man through and through, White is an influential character in Metropolis due to the power of the press.

Contrary to popular belief in the early issues of Superman the hero was unable to fly, it is claimed that the decision to allow him to fly was made by the animators of the Superman cartoon who found it easier to draw the hero flying than it was to show him jumping. This is the first issue of the comic book series where we see Superman in flight.