A little bit about the book...

Anything I mention about the book can be mistakenly understood as 'spoilers', so I would rather give a glance into the book without mentioning any events or plots of the story.

Swami is a mischievous little kid of about 10 years old and living in the era where India was under the British ruling... Like most kids of that age, Swami is a kid who cannot stay at one place and absolutely hated school, even worse Mathematics. School is his absolute nightmare. Anyway the story unfolds around the happenings of this kid and how he constantly gets into trouble and gets a good beating from his father.

Swami is a talkative little kid and thinks that's his way of facing life, talking himself out of everything. But he does learn the truth the harsh way. As many teens back then, all he wants to do is play under the sun, kick something, climb a tree, break something and harass somebody (unlike kids today!!!). This in fact was (and in most parts of India, still is) the life of a typical boy growing up. Technology isn't big in a kid's life. All they want is to play havoc!!!

In this regard Narayan gets deeply into the workings of Swami's ten year old mind, explaining exquisitely how he thinks and what his perspective of the world is. The reader does feel like Swami and gets very attached with the character as the story progresses. That's the magic of Narayan.

Significance of the book...

Swami and Friends is good read for the kids and teens alike. Also the book is widely used in the Asian continent as a study text for the students who study literature as a subject at schools. This does not mean that book is filled with heavy grammar and technical jargon. Actually the truth is in contrary to this.

Swami and Friends is written in such simple English it is hard to imagine that it is a work of such a literary genius like R. K. Narayan. The English used in the book is both plain simple, without any troubling words for the kids. Also the use of simple and short sentences adds to the simplicity of the book.

It is mentioned in the description that the book is about a mischievous ten year old Indian boy, and some parents may be concerned about the influence this will have on the already mischievous children. But the book is as such that it encompasses the mischief of the kids in a view of the kid which harmless and pure in his perspective. Also amidst all the mischief and naught, we actually find that Swami is a loving and a tender kid who's actually very sensitive. It is also a know fact that mischievous kids are the most sensitive and loving people of all. And R. K. Narayan does a great job conveying that to all of us.

So in conclusion it can be said that this book is good read for kids of all ages, who may just enjoy a good read or who may want to improve their English skills.

Author of the book...

The author of 'Swami and Friends' is India's one of the greatest authors of all time, R. K. Narayan.

R. K. Narayan is responsible for many of the outstanding literary works India has ever produced. And this book in particular captures the essence of India under British ruling and the mind and life of a typical teenage kid.

Other great works by Narayan includes the infamous

and many more literary works such as

Go take a look at them if you are interested...

A part of a video from the Swami and Friends TV production...

Buy the book from Amazon. 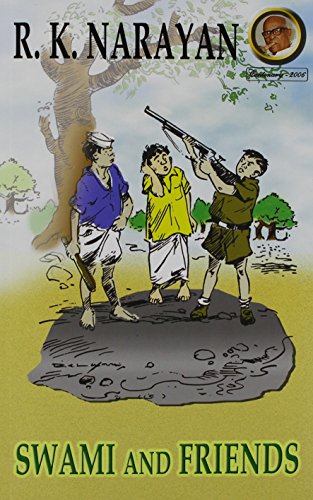 How did you enjoy reading 'Swami and Friends'?

A must read for all teenagers!!!

For literary enthusiasts and for English improvement...

4 stars for Swami and Friends by R. K. Narayan