Hunding's Saga - 22: The Over-King's Crown, Hunding and Tofig Plan the Theft of Basil's Crown for Valdemar

Is scheming to outwit or rob him the way to a man's heart?

'How do we reach this crown?' Tofig asked one morning back in the stronghold as they sat paring rich, dark red grapes from their stalks. 'Being guarded all day and night it will not be easy'.

'We wheedle our way into the Imperator's trust', Hunding answered between mouthfuls of soft fruit, washing it down with sweet Kypros wine.

'And how do we do that?' Aesc laughed. 'Do we kiss his feet and lie down for him to walk over us?'

'You could do that', Tofig laughed and slapped the Aenglishman's back. 'Why not go to him now and see how we fare lying on this cold stone floor! No, Aesc, there has to be a better way. Think of it as a challenge, that is all'.

'Or we could offer to guard his treasures', Hunding grinned lopsidedly.

'What women? He only has one woman, his wife. I mean his gold', Hunding smiled back, nodding towards the imperator's quarters.

'Believe what you want. All these great men have wives and whores. So how then?' Tofig stood up to reach for the wine flask in mid table.

'We offer to undertake a hard errand for him', Hunding answered, finishing off the pear.

'An errand?' Aesc did not like the sound of this. He felt they had undertaken enough for Basil already, 'You mean something like taking the Sultan hostage and bringing him here all the way across the kingdom?'

'Now that is a thought', Hunding mused, smiling inwardly. 'No, not that hard'.

'No I was thinking of asking the Sultan to become a Christian', Hunding laughed out loud, ducking as Aesc lobbed a date at him.

'Your wit is too sharp for me, Hunding my friend', Tofig stared dully at him.

'I was thinking along the lines of telling Basil we would do that, of asking him to show us the crown and saying I would set a trap for the Sultan and the only way out of the trap was him to become a Christian'.

'The way you say that, I might be forgiven in thinking you were in earnest', Tofig shook his head and looked down at his wine glass in despair, drained it and set it down hard.

'Why so downhearted, Tofig? I would say that has to be the wildest way to gain the prize we seek. Valdemar must wonder what has happened to us by now', Aesc was agog at the very thought of cheating Basil of his crown.

'We need to think about this', Tofig raised a finger in warning, 'because I would say the Imperator is nowhere near as foolish as you think he is. He did not earn his nickname by being soft on his neighbours'.

'We can sound him out. There is no harm in that. When are we to take him to worship next?' Hunding looked from Tofig to Aesc. 'You are God's chosen messenger, Aesc. You know all about this Christian thing. When is the next feast day?'

'Heathen!' Aesc smirked, and then took time to think. 'Holy Saturday is their next festival, I think. I heard one of the Varangians speak of it'.

'You understand them?' Tofig stared open-mouthed at Aesc, as in shock, and laughed. 'And I thought all our secrets were safe from him!'

'Now you know otherwise. He dwells in Jorvik', Hunding reminded Tofig, .'and you have to be able to understand our tongue if you want to make a living there. The Svear tongue is not so hard to understand once you know Danish'.

The three of them talked for some time about Hunding's scheme, the 'ifs', the 'buts' and 'maybes' tossed about between them. At length they were at one about how to go about talking Basil himself into seeing it as likely.

'The only stumbling block will be Herjolf', Tofig threw in.

'Herjolf stands guard over the treasury door, day in, day out', Tofig sucked the flesh from a pear as they both stared at him, waiting to hear more. 'Have you never seen him?'

'Is that his name?' Hunding sat back on the bench.

'Herjolf the 'Simple', so the others call him, because of his unwavering loyalty to the Imperator', Tofig told them. 'He does not sit with the others because they make fun of him'.

'Then he is easily dealt with', Hunding licked his fingers. 'We make friends with him, let him think we understand him and tell him his enemies are ours'.

'Herjolf-proof!' Aesc laughed out aloud and Tofig put a hand over his mouth,

'Not so loud!' Tofig hissed. 'If we are not careful we will end up in Basil's nethermost cells, feeding the crabs!'

'Aye, keep this to yourself', Hunding warned.

'Not even the rest of our crew should know - not yet, anyway', Tofig put a finger over his mouth and drew his eyebrows together in a threatening manner.

'Very well', Aesc crumpled. He felt flattened. Having to keep silent for long would be hard for him.

'You will not have to lie', Hunding assured him, 'if that is what troubles you'.

'You will keep this to yourself', Hunding warned his friend, 'or else'.

'Or else', Tofig drew a line around his neck with a finger.

'Would you?' Aesc was shocked that Tofig might kill him.

'Try me', Tofig warned, staring balefully at the Aenglishman.

'Oh, very well then, I believe you', Aesc sat back, hands folded across his chest. He felt very flattened now. He knew where he stood with Tofig, at least.

They made friends with the 'simple' Herjolf and Hunding talked Basil into believing in the likelihood of making a Christian of the Sultan. Aesc took Herjolf drinking into the back streets of Miklagard whilst Tofig stood guard on the treasure room.

'When?' Aesc asked Hunding one morning when they were breaking bread.

Hunding put a finger on his mouth and nodded to one side. One of the Varangians sat, brooding over a cup of wine.

'Follow me', Hunding asked Aesc after they had eaten in deathly quiet.

When they were out of the room Hunding looked about and stopped Aesc.

Aesc was beside himself. How would he keep this to himself for that long. He asked,

'You, Tofig and I', Hunding answered. 'No-one else need know - yet. Tofig is standing guard on the treasure room with Herjolf. You will be told what to do and when to act. This is as much as you need to know for now'.

Aesc nodded. A week yet, he thought to himself. How was he to hold it within him for so long?

The week went by, slowly. Things always pass that way when there are no foes to chase away for the Imperator. The Turks were not moving for the time being, nor were the South Slavs or Bulgars stirring. It was the right time to undertake the robbery, but they would not be safe from Basil's clutches until they were clear of the Krim, well north up the Dnieper beyond the first lake.

At last the others were told what was awaited of them.

'This evening we go down to the Imperator's treasure room, with Herjolf's say-so. We want you, Aesc, and you others to take Braendings Slange around the horn into the Black Sea and wait offshore beyond the chain. We, Tofig and I, will meet you out there in the night', Hunding told them when he was sure there were no-one else around.

Aesc stood by the doorway, listening out for footfalls. They would not be allowed to halt anyone, or keep them from their room. To do so would alert others as to what they were up to, and that would never do. Prince Valdemar gave them leave to secure the crown, otherwise they would still be in Holmgard as hostages. There was no way then they could reach home before the season ended. A long time before the Yule Feast ice would form on the River Volkhov, no doubt crush their ship into the bargain. And then would they be - what could they do, ride overland?

'How do we know you will be there before the dawn?' one asked. 'After all Basil will not be happy about us lifting his crown'.

There was laughter at this, but he was in deadly earnest.

'Ulf', Tofig told him, 'you will just have to wait. Either way we will not keep you waiting for too long. Trust us'.

Ulf nodded, resigned to his wyrd. Hunding grinned to assure him and he nodded back - no happier, yet not wholly hopeless. He would wait. The rest had no questions. Their wyrds were in the hands of Hunding and Tofig. But for Aesc and his few Aenglish friends, were they not Vikings?

Aesc shook his head when Hunding looked his way. No-one was coming, nor was there anyone loitering in the corridors leading to the rest room they shared with the Varangians. There were no shadows on the walls, where the light from the yard around the corner would surely throw some shade from a man hiding there.

'One last thing. Should we fail to bring the crown we will have to take another way north', Tofig told them.

Those who had come this way before knew that word would reach Valdemar down the river lanes whichever way they took beyond the Dnieper - the Dvina or the Niemen. He would have his Jomsviking friends watch out for them on their way west past Gotland and Bornholm. They would not be safe until they reached The Sound, beyond Helgeaa - the Holy River - in southern Skaane.

'The picture he paints is bleak', Hunding heard one of Tofig's Danes tell another.

'It is bleaker if we fail', the answer comes. Simple.

History of the Byzantine State 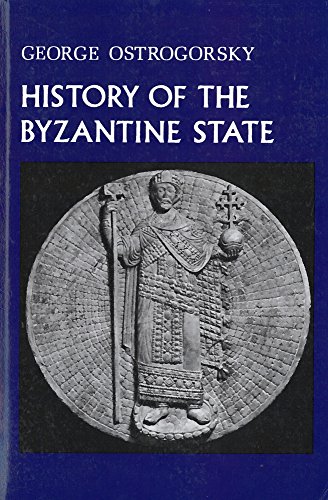 George Ostrogorsky's detailed history of the Byzantine state from Constantine in the 4th Century to the end in the 15th Century. The section Hunding's saga concerns is the early 11th Century regime of Basil II, 'Bulgar Slayer'.

His son Ivar will reach Miklagard (Constantinople) after the reign of Romanus Diogenes, who was defeated by the Seljuq Turks under Alp Arslan at Mantzikert in Asia Minor, and blinded by his subjects to wander as a beggar. A hard time for the emperor's family with threatened insurrection across the board from west to east.

Vikings of the East