Why Books Are Important

Soon after we adopted our daughter Mollie from China, I began to look for books at the library that were about China and also about adoption. Other the lovely book The Story about Ping, about a duck on the Yangtze river who gets lost, I couldn't find much. It worried me that my daughter might grow up without positive books depicting adoption, China, and Chinese culture. So I have been on a quest which has led me to many wonderful books, the best picture books I review here.

These books would be a wonderful gift for any adopted child and are worth purchasing for a home or school library too. In fact, I think it is very important for adoptive parents to be pro-active in making sure that their school libraries have good books about China for all children to read. The more all children read books that have positive views of China and Chinese characters and culture, the better the environment will be for our children. So if you buy a copy for yourself, you may want to get one for a school or classroom library too. All of them are useful not only for adopted children but for any classroom studying Chinese culture and history.

Interview with Jan Brett--Including her own Chickens! 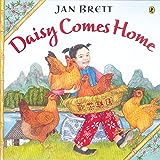 Like all of Jan Brett's picture books, this tale is full of lovely pictures of people, animals, and places. Daisy Comes Home tells the story of a hen named Daisy who is picked on by the other chickens in the henhouse. When she settles outside one night by herself in a basket, she has swept away on an adventure reminiscent of the story of Ping, the duck. Along the way, Daisy learns to fend for herself against monkeys, a water buffalo, and people who want to eat her. In the end, she returns home with the skills to make her own place in the henhouse.

Not only is this a wonderful story about how to gain self-confidence against bullies, but the lovely scenery of the marketplace, rural farmyard and lovely Guilin River (which Brett visited when writing this book) makes this story a treasure. I like the fact that this is a Chinese story which provides a lot of details about living in China, such as the fact that people ride bicycles, raise animals and sell in open-air markets, without making those facts what the book is all about. When my children visited China on a heritage trip, we saw many facets of life there which made us talk about this book and recall how details of rural Chinese life that are integrated into the story in a natural way were exactly what we saw on our journey. Lovely story and illustrations make this one of my favorites to read to classes of younger kids.

For Questions About Differences

I Don't Have Your Eyes
Buy Now

I Don't Have Your Eyes

I Don't Have Your Eyes by Carrie A. Kitze, is a simple picture book which explains that looking the same as your parents is not what makes a family. This book is particularly helpful for parents who have children who are being questioned by other children.

Actually, since the pictures in the book don't focus only on adopted Chinese children but show families with members of many different races, this book takes the discussion to a different level. It is about the fact that we can be the same inside, and choose to act as a family even if our biology is different. Since even birth children do not always physically resemble both of their parents, I think this book has a wider application than adoption alone. This book is a very nice gift book and also appropriate for a classroom or school library.

Ruby's Wish by Sophie Blackall is a wonderful true story of a very forthright, intelligent and independent Chinese girl named Ruby, who always wears red. This is not a story about adoption, but it portrays the true story of the author's grandmother, who grew up in China in a rich family presided over by a grandfather who made his fortune during the California gold rush and then returned to China. The grandfather and his children and grandchildren all live together in a large family compound, a hutong. When we visited China, we stayed in a hutong in Beijing very similar to the one in the story.

At ten, my daughter Mollie adored this story, and even as a teenager, she still counts it among her favorite picture books. The book has beautiful illustrations of Ruby and her growing up. I think she loves it because Ruby is such an appealing character. Although she feels restricted by the Chinese culture of her time, which doesn't generally value intelligent women, Ruby uses hard work and perseverance rather than complaining or rebellion to get her wish. There is also a wonderful depiction of Ruby's loving grandfather, who sees her wish and watches her grow and encourages her scholarship.

Although she is a girl, Ruby is allowed by her grandfather to attend the lessons taught by the teacher who comes to the house. The grandfather watches as Ruby progresses better than her brothers and cousins. He notices her beautiful poem, and he listens when she explains that she wants to go to the University rather than get married. On New Years Day, her whole family watches as she opens her red envelope to find a letter from a University which states they are accepting her as one of their first female students. The book ends with a picture of the real Ruby and a note that "So that's how Ruby got her wish. It's a true story. And how do I know this? Well, Ruby is my grandmother, and every day she still wears a little red." 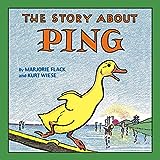 The Story about Ping
Buy Now

The Story About Ping

The Story About Ping by Marjorie Flack and illustrated by Kurt Wiese is one I remember from my childhood. When my family took a boat down the Li River two years ago, we saw fishermen with cormorants, houseboats, and ducks just like the ones in this book. Even though our Chinese guide taught English to Chinese children, she was not familiar with this book, so I sent it to her along with a copy of Daisy (her name was Daisy) when we got back.

The Story About Ping was published in 1933 and has wonderful colored pencil drawings of Ping, a duck who lives with his "mother and his father and sisters and brothers and aunts and uncles and his forty-two cousins" on a "boat with two wise eyes on the Yangtze river." The story of Ping getting left behind and living on his own for a day is an enchanting adventure. Every child imagines the freedom of running away and coming home again safely.

Along the way, the story shows some beautiful parts of Chinese river history, including the cormorants with rings on their necks who dive for fish for their master, and a family which lives on a houseboat and catches Ping for dinner.

Ping escapes when the little boy who caught him sets him free, and the reader feels happy and satisfied for him to find his own boat and run toward it, willing to take the spank on his back for being the last duck up the boat ramp in order to be back again, safe in his family.

My children have loved the story of Ping and it has allowed us to talk about the history of China and the different ways people have lived there. It has also let us discuss how important the rivers of China have been to the people and how China developed so early into a world power because of its excellent river system. Ping is a satisfying bedtime story which is beautifully written and lovingly illustrated. It also makes an interesting comparison to Daisy, which I'm sure Jan Brett had in mind when she was writing her book. 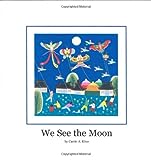 We See the Moon
Buy Now

We See the Moon

We See the Moon by Carrie Kitze was written specifically for Chinese adoptive parents and children. The object of the book is to open up a dialog at an early age between parents and children, allowing the children to ask questions about their birthparents such as: What do you look like? Where are you now? and Do you think of me? It uses the moon as a tool to help children connect with the family that they think about.

The back of the book has some information and resources for adoptive parents to look as, as well as some suggestions about creating a Lifebook for your child. The illustrations are Jinshan Peasant Paintings created by Chinese peasants near Shanghai. Personally, I love these folk paintings and bought many similar ones when I was in China. My girls love to just look at the paintings in the book and discuss them. There is one very poignant one of a wrapped up Chinese baby in a basket with just these words, "Why did you leave me?"

We See the Moon is not an easy book to read, but it can help adoptive parents tackle some of the hardest thoughts, feelings, and questions.