The Amateur Marriage - A Wartime Wedding

Marriage During Wartime - This One Occurred In Baghdad

The Amateur Marriage by Anne Tyler

Anne Tyler's The Amateur Marriage describes a mismatched couple that fights out six decades of married life. They do not form individual identities or a sense of a couple, socially, within a larger community. Each fights for dominance in the marriage.

An individual is made up of his or her nationality and ethnic background and the ways in which they satisfy basic of food, shelter, love, and recognition). They are further defined by what groups they join, religion, political leanings, and jobs and careers. However, an individual sees himself in one way, while others see him another.

Conflict also defines a personality as an individual part from others. One may become anti-child-abuse or anti-war, for example. Sigmund Freud felt that identity is biologically based and ended by the end of adolescence.

Erik Erickson broke away from Freud, believing that identity can develop through social interactions as well and does not end in adolescence. Many follow his ideals.

Stuck at one Stage

The famous scientist believed that social and biological elements complement each other to give people crises to remedy in all 8 stages. Remedy leads to maturity and non-remedy results in being stuck at one phase. The couple in Tyler's book are struck.

In Tyler's book, Pauline and Michael Anton meet in just before WWII in Baltimore. Pauline jumps from a streetcar to join a patriotic parade and cuts her head, so she dashes into Michael's family-run grocery, looking for help.

Michael, a more conservative personality, is shocked by Pauline's drama and falls in love at first sight.

Just in their early 20's, they marry, but remain adolescents. Michael must go to war, but is shot in boot camp, and comes straight back. He and Pauline have three children and move to the suburbs. They fight constantly over the years and get nowhere in their relationship. Each takes pleasure only in winning an argument.

Pauline is constantly abrupt, flying off the handle. Michael stew in anger silently about tiny things. Nothing is remedied in 60 years' marriage and the Antons each becomes an old teenager.

The Antons? -- This marriage is anorexic.

They isolate themselves from social interactions that would help. They fight, each trying to win in order to be The Winner, therefore a worthy person. Unfortunately, no one ever wins. Mike is Polish Catholic, Pauline is Protestant; neither will budge. Pauline believes that two souls should combine as one; Michael; that they should remain separate but walk in the same direction. The marriage fails for six decades with a flighty woman and a cold distant man.

While marriages of their friends grow via individual/couple maturity through the usual give and take, the Anton's marriage is stuck in feuding. Tyler paints their friends' growing marriages as fruit trees:

"Marriages are like fruit trees...After a time they meld, they grow together, and it doesn't matter how crazy the mix is, peaches on an apple tree or cherries on a plum tree; still if you tried to separate them you would cause a fatal wound."

Meanwhile, the Anton's marriage is a "gnarled, wizened, whiskery tree you see on wind beaten cliffs where there's not enough soil or water." The Antons? -- This marriage is anorexic. 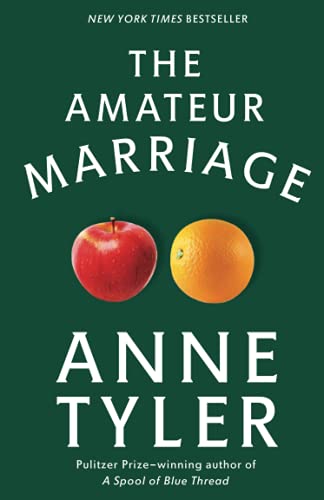 How to Grow Up

Over the decades, they become entrenched in useless mindsets, unable to develop past the mid-twenties, psychologically. The miss all of the intimacy, generativity and integrity that lies ahead in life. When he does think about the marriage, Mike sees that "all those young marrieds of the war years...wise and seasoned... until only he and Pauline remained...the last couple left in the amateurs' parade". He saw themselves as "more like brother and sister than husband and wife.

In dysfunctional families, some members may develop identities despite their family stagnation and toxicity. Such hardiness of personality is about control, commitment, and challenge and can form if people can follow these and related ideas:

Some dysfunctional individuals gain these skills through self improvement study and/or counseling, but the Antons do not. Even when they decide together to parent their grandson Pagan, rescues from the drug culture, they fight. Pauline says their fights can be patched up here and there and Michael sees these them as a bottomless pit beyond repair. The Antons decide just to tolerate each other until Michael leaves the marriage.

Altogether, this novel contains intimate and detailed character development of two people that struggle through life without ever growing up or giving in. They each want to win a battle intheir own mind and neight does. It is all sad and awesome at once -- and much like people every reader probably knows.