The Proper Care and Feeding of Marriage: A Book Review

This book is based on the theory that for men and women to have a good marriage, they must recognize and learn to appreciate the differences between men and women…the feminine and masculine traits which make males and females separate and unique from each other. It is clear to me after reading this book that Dr. Laura Schlessinger is a woman totally behind the traditional view of marriage. This means a one man and one woman bonding under God and law. This also means she believes the husband should be the breadwinner and the woman should stay home and take care of the children if there are children resulting from the marriage. This view is hard to take for many women who were brought up in the era of feminism where Gloria Steinem made news for her extremely feminist views on the oppression of women by men. And also for many men who were also brought up in this age of feminism where women were supposed to be able to, “Bring home the bacon, fry it up in a pan, and never let them forget they’re a man” as the old advertisement goes. Men and women both have heard the feminist cries for the past five decades, and now here comes Dr. Laura with her very traditional views.

The book is filled with stories of people who have contacted Dr. Laura through phone calls to her radio show, and also emails. It also is filled with her advice to these couples who have called or emailed her with their personal problems. Her advice is always to put the marriage first, and put individual selfish needs aside for the good of the marriage, and also for the best interests of any children resulting from the marriage. Often in the book, she also refers to another book of hers, ‘The Proper Care and Feeding of Husbands.” This book clearly carries the message that women can make or break a marriage through their attitudes toward their husbands. If they treat their husbands well and put their husband’s needs first, they will be loved in return and have wonderful marriages. This book about marriage is a continuation of that theme. It did make me realize that I have fallen victim to the feminist views that were prevalent in my developing years of the sixties and seventies. As an adult Christian woman though, I do believe that Dr. Laura has some very valid points. At first, that was quite hard for me to swallow. I really had a tough time with the subservient “little woman” role as I was reading this book. But there are also many instances where she does talk to men and explains to them that they need to put their needs from their pasts away and put their marriage first. That was the saving grace of this book for me. One of the main themes of this book is that husbands and wives need to work together as a team to nurture and sustain their marriage rather than each of them looking out for their own needs as a primary goal of their marriages. I agree with that, especially since I am currently three years into my second marriage, and I was surprised and happy to hear my second husband talking about the two of us being a good team, even as far back as our dating days. Dr. Laura has a great idea with the team approach. I can tell you from personal experience that it really works.

There are some parts of the book that are quite interesting. Dr. Laura had done some surveys of men and women and included the responses in the book. She asked such questions as, “What do you, as a man, most admire about women in general?” and the same question was asked of women. Then she published the top ten responses to each question. She also asked about what each sex admired most about the opposite sex, and what they feared most about a relationship with the opposite sex. The responses were interesting, and some were quite surprising. In Chapter six, she also includes ten “marriage tools” that in her opinion can most help a couple to have a good marriage. The book is easy to read, and I especially enjoyed reading quotes from conversations with, and emails from her listeners. The emails were written in italics, so it was easy to differentiate what she said and what her readers had said. And conversations between Dr. Laura and the listeners were each assigned initials, so it was easy to read who was saying what.

Readers who will enjoy this book will be men and women who believe in traditional marriage, including husbands being the breadwinners and the wives staying home to take care of the children and the home. And also, readers who are struggling with unhappy marriages who may be able to glean helpful information about how to improve their marriages through reading this book. 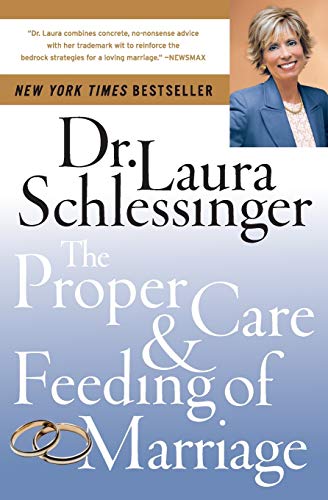 Do You Agree With Dr. Laura's Traditional View of Marriage?

More Hubs For Husbands and Wives