The Catcher In The Rye by J.D Salinger

Lynsey is an avid reader and loves biographies and historical books, as well as thriller and horror fiction.

Have you read the book? If so, did you like it?

“The Catcher In The Rye,” by J.D. Salinger is a novel in which the fate of the main character, Holden Caulfield, is important in conveying the writers theme. Salinger uses many techniques, including characterisation, method of narration and symbolism throughout the novel to portray the main themes of insanity, alienation and growing up, and to give the background to Holden’s fate: having a mental breakdown.

The novel starts off as Holden speaks to you from what is suspected to be a mental health asylum. While he doesn’t admit this specifically, he uses implicit narration throughout the novel, and vaguely states that he had to “come out here and take it easy.” He tells his story of how he came to be there, and, indirectly, the decline of his mental state. He starts off with his memory of being alone, looking over the school football game from a hill overlooking the pitch, which strongly introduces the main theme of alienation, and the novel follows him through the next few days, as he spends his time in New York before returning home to face his parents.

A possible reason for his alienation, as we find out early in the novel, is that Holden is very judgemental of people, and he feels that everyone is “phony.” Throughout the novel, there are many rushed interactions with various characters, and whenever anyone suggests that Holden may need help, he simply runs away.

An early example of this is when he goes to visit one of his teachers, Mr Spencer, “to say good-by,” before leaving the school. Like many of the characters in the novel, we only meet Mr Spencer on this one occasion, and such brief interactions are used by Salinger to show how Holden deals with people and confrontation: he runs away from them. During the meeting, Mr Spencer is simply giving Holden some good advice, and responds to Holden’s defensiveness by saying: “I’d like to put some sense into that head of yours, boy.” By introducing dialogue, Salinger allows the reader to form a less biased view of the characters, as Holden’s description of them is often tinged with cynical tones, as he doesn’t realise they actually care for him and his future. In what becomes typical Holden style, he makes a false excuse and rushes away from the situation. Ironically, by doing so, he becomes what he despises. He hates everyone else for being “phony,” yet he lies constantly throughout the novel, often with no real reason to do so. He even admits: “I’m the most terrific liar you ever saw in your life.” It’s possible this idea is introduced to suggest that he doesn’t really truly like himself.

During his time in the hotel in New York, Holden orders a prostitute for the night, which turns into another awkward meeting. This chapter signifies his mixed views of the adult world. While he sees the adult world as being corrupt and phony, he is also aware that he is turning into an adult, and is somewhat struggling with his own sexual awareness. When the prostitute, Sunny, turns up, Holden starts to feel uncomfortable and tries to persuade her to talk for a while. When she refuses, and tries to speed things along, he makes up another excuse, saying he’d had an operation recently on his spinal chord, pays her and asks her to leave.

The novel is littered with similar meetings with insignificant characters, and each meeting lets the reader create a better profile of Holden’s personality through observing his reactions and feelings in each situation. The only character with whom Holden has a positive interaction with, is his sister phoebe. She is the only person who has any influence on Holden, and when she says to him: “You don’t like anything that’s happening,” it allows him to reflect on his negative views. While he is still defensive, we don’t see the typical reaction of running away; instead, he admits that the only thing he likes is his dead brother Allie, and spending time with phoebe. She is the only person who directly points out the reality to Holden that Allie is dead, and he has a negative approach to everything.

Salinger shows us this negative approach throughout the novel, in the tone that Holden adapts as he is telling his story, and the method of narration is very important in doing this. Immediate action is used to engulf the reader straight into the story at the beginning, with Holden saying “If you really want to hear about it…” This creates an instant sense of confusion to the reader, as no background is given, which adds to the theme of confusion and insanity.

Salinger uses first person narration and direct address to involve the reader, and takes on a colloquial, conversational tone to accentuate this. This allows the reader to build up a relationship with the character, gaining trust, and at a later stage, sympathy, when Holden gives an insight to his true feelings to the reader: “I don’t feel like going into it.” Generally, Holden speaks in a crude and energetic way, often confused and easily distracted, which also adds to the theme of insanity.

Another way that Salinger builds up the relationship between the reader and Holden is by use of symbolism. When Allies baseball mitt is introduced, the reader starts to feel sympathetic towards him. He confides in the reader as to how he “broke all the goddam windows with my fist” when he found out Allie had died, and the theme of insanity is highlighted when it is revealed that Holden had previously been considered as unstable by his parents, who were “going to have me psychoanalysed and all.” He also reveals that he feels closer to Allie when he has the mitt, as it has poems written all over it that his brother enjoyed.

As well as the mitt, “The Catcher In The Rye,” is full of symbols which reflect his vulnerability. One such example is the ducks in the lagoon at central park. Holden asks the NY taxi drivers if they know what happens to the ducks in the lagoon at wintertime. This thought crosses his mind at various points in the novel, so much so that Holden drunkenly decides to visit the lagoon to see if they are there. This signifies his concern with his own safety and wellbeing, and shows that he wants to be reassured that he will be taken care of in life.

We also see that Holden is hunting for a purpose in his life, as is illustrated by the use of the red hunting hat. As well as offering protection to the elements, his hat gives him the distinction from other people that he craves.

The title itself is symbolic, as it shows us the distorted image Holden has of himself. Ironically based on the incorrect words of a song he hears a little boy singing, he envisions himself as the catcher in the rye, saving all the children from falling off the cliff edge into their doom. The cliff in his image signifies adulthood, and he seems determined to keep children protected from growing up, to have them retain their innocence. Again, it is phoebe who points out to him that the correct words of the Robbie Burns verse are “if a body meet a body” rather than his misconstrued “if a body catch a body.” This is again ironic, as the song is actually about having casual sex, which is something Holden has struggled with throughout the novel.

The final symbol we see in the novel is the carousel, where Holden has a moment of enlightenment. It represents the wheel of life, which is significant in the Buddhist faith, which Salinger followed at the time of the novel. It represents life… going round and round… with those on it taking the risk of getting hurt if they were to fall, and also trying to get prizes. He watches phoebe and his role as catcher is emphasised, and at the only point in the novel, Holden tells us that he: “felt so damn happy.”

The novel comes full circle, just like the carousel, and returns to Holden speaking from the asylum. In his final, alienated words of advice he tells us: “Don’t ever tell anybody anything. If you do, you start missing everybody.” While on the road to recovery, he still has a rather negative view of revealing himself too much, so we are left with a bit of a cliff-hanger as to whether he got better, or whether, like the author himself, he went on to live a rather isolated life.

All in all, I feel that J.D. Salinger successfully used characterisation, narrative technique and symbolism to show us how the fate of the main character was so important in conveying the themes of alienation, insanity and growing up. He introduced us to a somewhat irritating boy, and developed our attitudes to feel sympathy and empathy towards him by the end of the novel, with the realisation that Holden Caulfield, like many young boys, was simply mixed up, and struggling to find himself. 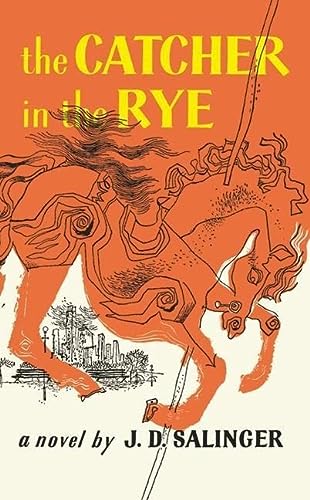 The Catcher in the Rye
One of the many versions of the catcher in the rye book. The story is still the same though!
Buy Now