The First Printed Edition of the "Bible"

Definition of "The Bible" For the Purposes of This Hub

The Bible is a compilation of ancient texts selected by the Council of Nicea beginning with the first council in A.D. (Common Era) 325. The council was convened to determine Christian creeds and canons (religious laws) under the Emperor Constantine.

Who Wrote the "Bible"?

"Modern (biblical) scholars believe that the 66 books of the Bible were written by at least 39 authors over a period of 1,500 years."1 (References given at the end of the hub.)

The number, 66, is not all inclusive of the number of books in today's bible, but rather an overall number mainly used by the majority of Jewish and Christian scholars. Various sects of Judaism and Christianity use different versions of the bible and some books are added, some are subtracted.

Moses is considered to be the first author of the Old Testament. But there are about 20 or more people named as authors of the OT.

The New Testament authors are slightly better known and consist of the gospels of Matthew, Mark, Luke, John, Peter, Paul, and Jude. Jude is allegedly the half brother of Jesus Christ, the one called the Messiah, who was considered to be the central figure of the New Testament and of the new religion called Christianity.

What was the Geographic Scope of the Bible? Its Setting?

There is a factual accounting of some of the geographical locations in the Bible. The earliest accounts and stories of the Bible in Genesis have no known whereabouts. The "garden of Eden" is thought to have existed somewhere in the "fertile crescent" of Mesopotamia, but no one has ever found a specific geographical location.

"Before Abraham came on the scene, the biblical story had already begun in a world that had witnessed the rise and fall of many human kingdoms. However, it has proved almost impossible to identify much of the early persons, places, or events recorded in Ge 1-11. Many of the persons and places in Ge 14 still elude us."2

The entire geography of both Old and New Testaments cover the world of the "Middle East". The countries still present today are:

The major geographical markers of the Bible are the Tigris and Euphrates rivers. The bulk of the entire area was collectively known as Mesopotamia.

The Bible World in a rough circle by bodies of water. 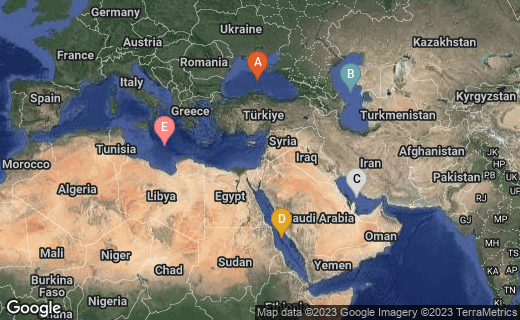 The Common Era, or CE refers to the new calendar created to mark the birth of Jesus Christ. It also vaguely replaces the old marker of A.D. which is sometimes confused as "after death" or after the death of Christ.

BCE refers to "before the Common Era" or "before Christ" (B.C.)

The Romans elected this new calendar to start at the year 0 (zero) to divide the old system of B.C. and A.D.

When was the Bible written?

The complete Old and New Testament (as assembled by the Council of Nicea) covered a timeline from a vague "The Beginning" through 95 A. D. The Romans, under the decree of Emperor Constantine, restructured the common yearly calendar to begin over, ostensibly in honor of the birth of Jesus Christ.

"The first five books of the bible in Judaism are called the Torah, meaning "instruction", and are regarded as the most important section of the Scriptures, are attributed to have been written between the 16th century and the 12th century BCE by Moses, but scholars now believe that they were actually written by four main sources known as JEDP."3

"The oldest extant manuscripts of the vocalized Masoretic Text (the basis of modern editions), date to the 9th century CE. With the exception of a few biblical sections in the Prophets, virtually no biblical text is contemporaneous with the events it describes."3

The stories in the Bible are said to have covered the timeline from the beginning of "everything" through the time of the ministry of Jesus Christ, the Rabbi of Jerusalem. The entire New Testament was written after the death of Jesus, and Jesus did not leave behind a known written autobiography.

The authors of the New Testament wrote or dictated their stories many years after the death of the one called, Jesus. Paul, considered to be the father of Christianity, simply wrote letters describing his visions.

Why has the Bible become the most widely distributed book in the world?

The Bible was the very first book produced by a new technological marvel, the moveable type printing press developed by Gutenberg.

Before the printing press was invented, every single piece of parchment had to be laboriously copied over and over to produce new editions. Complete books were hard to find and people who could read and write and translate were even harder to find.

King James of England commissioned the most popular translation of all of the previous copies, pieces, and various translations of the books of the Bible. This translation became a sort of treasure owned by the rich and those in power.

As moveable type and copies became easier and easier to produce, copies of the printed editions of the Bible were distributed to more and more people. It was an honor to own a copy of the Bible. It marked the upper class from the lower classes.

The book became a symbol of wealth and power. Eventually, the process for printing the book became so cheap that almost everyone could afford to display a copy of a real book in their home.

The book was mass marketed to nearly everyone on the planet. The price became so cheap that households began to see it as a staple in their homes. They recorded births and deaths in it and kept it as a family heirloom and genealogy record.

Missionaries carried cheap copies to Africa and other populated countries and gave the bible away as gifts. For some reason, the bible became a fixture in every hotel, motel, and Inn across America.

Artist Rendition of the Council of Nicea

Currently, there are some six to forty major Independent denominations, Protestants, Orthodox, Roman Catholics and Anglicans, contributing to about 33,000 organized Christian groups using the Bible as a guideline for societal and cultural life.

The books of the Bible are touted as "divine inspiration", books of prophesy, the direct word of the Abrahamic god, moral guidance, spiritual guidance, and the way to be purified and cleansed of "original sin", a belief stemming from God (the main character of the books) having placed a curse on all of humanity for the disobedience of the first human woman.

Although there are advanced degrees in Seminary and Bible studies, very few people have actually read the Bible as a book. Even in modern times, it is extremely rare for anyone to have read all of the pieces and parts of the bible in the original languages. It is used primarily as a reference book and subject to diverse and imaginative interpretation.

As the Bible's books refer to a civilization stretching from some 4,000 years before the Common Era, to no further than approximately 96 years after the Common Era, the stories of the Bible should be well documented and proven by independent contemporary books.

However, debates continue constantly on who wrote the books, how it was written, the subject matters, the varied interpretations of the books and passages, and even if the main characters were historically accurate.

The books sometimes read as lectures, history lessons, poetry, mythology, and anecdotal examples. The original books contain a lot of genealogy and creation myths which may or may not have been copied from the Sumerians and Egyptians.

Overall, the books of the Bible are extremely difficult to read and interpret. Some people insist the books are written in "code" and must be read under the influence of the "holy spirit" and in a certain order.

Some people insist that the Bible books are the inerrant word of the creator of the universe and to question the "word" is to blaspheme the creator.

Christians tend to view the Bible as coming directly from their triumvirate God, God the Father; God the Son; and God the Holy Ghost. They believe that the actual authors of the books were "divinely inspired" by these Gods.

Can you honestly say you have read the entire Bible from cover to cover?

1. How many authors wrote the Bible?

2. When was the Torah written?

3. The Bible Online - Searchable and in several translations.