The Finest Hours - A Book Review

I love to read books and enjoy reviewing them. I am addicted to my kindle, and when it is out of battery power I have withdrawal symptoms.

My rating for The Finest Hours

4 stars for The Finest Hours Book

In the year 1952, the New England states were slammed by an unexpected blizzard. Maine and much of northern New England was buried under two feet of wet, heavy snow, marooning numerous motorist on roads buried under 10 to 12 foot drifts. Further south on Cape Cod there were more than 4000 telephone knocked out because the ice and snow that clung to the lines was simply too much weight. According to the book, a snowshoe race was canceled because there was too much snow! It was the worst storm the east coast saw in years.

Out on the seas, the conditions were even worse. Any ship or boat still on the east coast were facing high winds, snow mixed with freezing sea spray, and waves over 50 feet high. It proved too much for two T2 tankers, Fort Mercer and the Pendleton, which were forced to ride out the storm because the poor visibility and weather conditions prevented them from safely navigating to their destination.

T2 tankers, which were hastily built during WW2, are commonly made of dirty steel (steel weakened by excess sulfur) and known to crack in high seas and cold temperatures. This is exactly what happened to the two aforementioned ships, and the two halves of both ships were now at the mercy of the elements.

U.S. Coast Guard to the Rescue!

In the photo above, there is a small boat. This was the standard lifeboat of the US Coast Guard. It is a 36 foot boat with a 160 hp engine, and built to carry 12 people. Imagine receiving orders to rescue people stranded on a broken-half of a tanker in weather conditions that could sink it at any moment, not mentioning the lifeboat itself. It must have felt like a suicide mission. Yet that was exactly the orders given to both Bernie Webber and Donald Bangs, to skipper a lifeboat out in the tumultuous waves.

Crew Members of the Pendleton

While the rescue itself was an amazing one, and in fact involved much more than just the two skippers and their respective boats and crews, the book itself could’ve been better in my opinion. It was good, and if I were to rate it out of 5 stars, I would give it 3.5 stars. When I was finished reading it, I knew immediately that it wasn’t necessarily one of the best I’ve read, and yet, it was the why that puzzled me. If somebody would’ve asked me what I thought about it, I would’ve said, “I don’t know, it’s just….” Then emptiness…

It took some thinking to put into words what was lacking, but I came to the ah-ha moment. What this book failed to do is make me feel like I was actually there. There’s a big difference between telling and showing a story through writing. The author didn’t show me what it was like facing 50-plus foot waves with a small lifeboat; it just told me that there were 50-plus foot waves. I’m sure it was scary, and it did tell what went through Webber’s mind several times, but again, it told me. 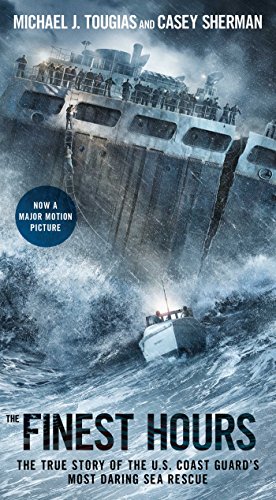 Perhaps I’m being too hard on the author/s; they definitely did their research. Or maybe I’m too used to fiction, and for nonfiction, perhaps as a general rule the style is a bit different. Whatever it may be, I won’t discourage anybody to read this book, it just wasn’t an edge-of-the-seat book. If anybody wants to read it, I’ll be curious to hear their thoughts. Please take the time to comment below!

If you read this book...