There is no doubt that Alistair Horne, who has produced some positively magisterial works on French military history ranging from 1870 to the First World War to the disaster of 1940 and finally to the renowned "Savage War of Peace" in Algeria fought by the French, is a brilliant writer. Which only adumbrates the disappointment that one can feel in reading The French Army and Politics 1870 to 1970, a short book which works neither as a good introduction to the field, nor as anything particularly revealing for experts, nor even I would say, as a general reference work. Although readable and well written, as one would only expect from the excellent pen of Alistair Horne, as a work of history it falls flat.

With a normal chronological organization, this book offers little surprises in regards to its layout. An initial chapter lays out the course of events starting with some discussion of French history and debates over the army's role up until 1870, then in depth is dedicated to the French army up to 1900, during which period it enjoyed high prestige and importance, part of the need for strength and possible vengeance against Germany. Unfortunately for the army, it then lost much status during the Dreyfus Affair, followed by a frantic rebuilding and patriotic stance in the years just before the First World War, as is covered in the second chapter. This chapter also covers the dynamics between the French army and governance during the First World War. From 1919 to 1940 is a brief chapter about interwar military relations, mostly focusing on the military's hard-line policy against Germany immediately following WW1 and then its political role in seeking the armistice in 1940. A final chapter covers some of the maneuverings and stress laid on the army during WW2, followed by the army's relationship to political authority during the wars of decolonization, particularly Algeria, where it felt to be placed in an untenable position and part of it rebelled, and which also reflected the important differences in decision making between civilian and military political figures.

One can observe these weaknesses in its references during many events, when it will relate that space concerns limit its ability to discuss what occurred. Most notably, one could see this during the Dreyfus Affair, when the entire event is simply brushed aside under the assumption that the reader will know what occurred. For experienced readers this makes perfect sense - but why would somebody who already is well versed in French politics of the era be the target of a book which is a bare 90 pages long, almost skeletal and deeply lacking in detail?

Horne makes note of his debt to March to the Marne by Douglas Porch, and indeed, for the pre-1914 period, there is essentially no new information which Horne contributes. Even important parts which were mentioned in March to the Marne are little covered, such as debates over conscription, and there is no conveyance of the intricate statistics and analysis of who made up the French officer corps. This continues into the Interwar period, where again, conscription length time was a highly important aspect of military-civilian relations, with very extensive debates over the period of time of service and how many divisions to have. This entire nexus of the debate between the French Left and French Right about military service times and the importance of a professional or conscript army is little covered, save for a summary treatment towards the beginning. In the First World War, Joffre on multiple occasions had wanted to violate Belgian neutrality but had been dissuaded from doing so by the stern commands of his superiors: this too, is little mentioned, as are other operational controls placed upon the military.

The one area which seems somewhat redeemable is the post-1945 element, which although short, does at least bring some interesting material about the treatment of officers who had divergent paths in the Second World War, although this could have been heavily expanded upon - some of it for example, is observable in the treatment of The French Navy and the Second World War, where one could perceive an attempt to rewrite a history of the navy during the war to appease and heal the wounds present. It offers tantalizing material, such as the belief of the military as they themselves being a liberal force during the Algerian conflict, more sympathetic to the oppressed Algerian peasants than to the Pied-Noir colons, but does little to expand it. Differences between civilian and military objectives for victory, save for the disagreement concerning De Gaulle and his army, are little covered. It makes overall for a promising, but quickly cut short section of French military history.

Other books do a better job in covering this subject, with again, March to the Marne coming to the forefront. Strange Victory to some extent, to understand the French army and state in the Interwar period. Horne's other books, I am sure, do a far better job for the Algerian conflict. This book barely scratches the surface, but it also fails to provide a good general overall summary: it accomplishes very little in the end of counts, and in this is an unfortunate product from an otherwise gifted writer.

2 stars for The French Army and Politics 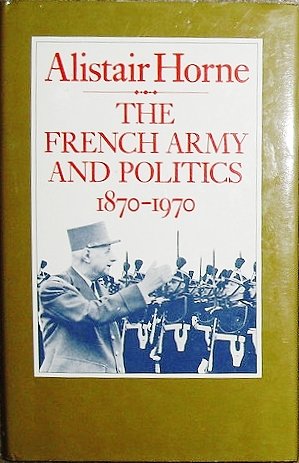