The French Economy in the Twentieth Century Review

France has been known historically for a surprising and unique route that it has taken on the path to its contemporary economic position, one marked by a large rural population, low population growth, an expansive colonial empire producing a closed franc zone which abetted protectionism, large state economic intervention, and a delayed transition to a fully industrialized economy. During the 20th century, many of these features were ablated, while others survived, sometimes in fact the early 20th century adumbrating the later developments in the period. It is the subject of the transformations of the French economy and its general development, specifically in macro-economic and structural terms, that Jean-Pierre Dormois presents his book The French Economy in the Twentieth Century.

The first chapter is devoted to the end of what the author sees as French economic exceptionalism, based on a largely rural nation with a low population growth, which has been replaced by France becoming largely similar to other European nations (or more ominously, to the Americans....) - similar moderate population growth with large amounts of immigration (in this it was its neighbors evolution towards its previous modern which was most marked), and a largely urbanized population.

In the second chapter, French economic history is periodicized into the 1900-1913 period, 1914-1945 period, 1946-1973 period, and the 1974-2000 period, the first marked by slow but sustained growth, the second by general economic stagnation, the third by economic boom, and the fourth by low economic growth once more, with discussion of reasons why and some of the effects.

Trade, colonialism, represent the third chapter, which deplores French isolationism and protectionism in the WW1 to 1960s era, viewing it as a brake on French economic growth, especially in its imperial form, castigating colonialism for negative economic results. Since the 1960s France has come to be increasingly open to Europe and its trade redirected there.

The expenditure and influence of the state is the mainstay of the fourth chapter, opening with the distinctive French preference for state guidance and direction, and followed with discussion of the number of employees of the state, various tools used by the government for intervention in the economy in both fiscal and monetary realms, and the development of social security.

Various economic institutions and elements constitute the fifth chapter, such as judicial aspects, types of firms and their concentration, the banking system, education and research, and labor unions and some of the elite technocratic groups and institutions which govern the country.

The greatest change in the French economy, the dramatic shift in economic employment sector in the second half of the 20th century, changing the nature of French employment from an economy based principally on agricultural work to one defined by a service economy, alongside a respectable but diminishing-in-employment-terms industrial sector and a tiny agricultural employment. Along the way, the number of workers grew somewhat, but not hugely, and was repressed by the state. Wages rose and hours worked fell, although for the working class, since 1973 results have been negative. Women have entered the work force in larger and larger numbers since 1973 themselves, although they had always had a relatively large percentage number in the French economy. Unemployment, traditionally low in France but growing rapidly since the late 1960s, is the final theme,

Despite the reduction in agriculture's importance in the economy it continues to be a major preoccupation and economic sector, as is related by chapter 7, which showcases the dramatic reforms in French agriculture after WW2 which transformed it. Despite the major strides in production, the picture painted is not a rosy one, depicting an industry reliant on subsidies and not nearly as productive as heralded.

The two big economic sectors which profited from the relative decline of agriculture were industry and services. Industry grew more concentrated and productive over time. Services started out relatively unproductive but exploded during the Trentes glorieuses (1945-1973), and grew to constitute a key feature of the French economy, with some of the enterprises listed.

A conclusion advances the argument that the closest and most similar economy to France in Europe is Italy, and warns against claims of particular French economic exceptionalism and insular examination.

Although written by a French writer, this book hews more closely to the perceptions of the Anglo-Saxons (Britain and the United States) upon the French economy, representing what might be viewed as the dominant neo-liberal globalization perspective. It is a volume which is, if perhaps the moniker of fiercely is ill suited, certainly deeply critical of French economic policy, be it in regards to subsidies and protectionism, unemployment and employment policies, protectionism, and state intervention: it repudiates these in favor of what would be to the Anglo-Saxon eye a much more orthodox view of how an economy should be run. Perhaps Jean-Pierre Dormois was influenced by The Economist, which he credits with helping to improve his writing in English for the book, but doubtless it does represent his own convictions. While the book is certainly no novel, its brevity, efficient organization, and almost polemical tone does do something to prevent it from being too boring. Indeed, for somebody who enjoys plentiful tables, charts, and statistics, these are in abundance and break up the text, although some of the charts to me at least, seem poorly labeled and at times confusing....

It is furthermore a surprisingly short book, running at barely more than 150 pages for its content. This naturally brings both strengths and weaknesses: weaknesses in that the content must naturally be somewhat sparse and trimmed down, to fit into such a short volume, but the strength in that it is short, and that it is, for its size, a good and useful portrait of the economy. It might be useful to think of it not so much as a history book or a textbook, but rather an exposé, or even a pamphlet of the French economy: a negative one, but one which earnestly presents its facts and ideas. And there are few other books which provide for a general overview of the 20th century: there are plentiful books for certain eras, and for certain features of the French economy, but precious few which look at it as a whole. It is one which has selected its niche well.

Ultimately after reading this book one will only have an understanding of the French economy in the broadest sweeps, focusing on macro-economics above all else. Perhaps in this regard, the picture on the cover is deceptive: the book dives little into the individual events which transformed France and French economic life, like the cars and roads shown on the cover. But to provide a good introduction into the subject, and a general history of the 20th century, one which ties together this era, it does its job in a workmanlike way, even if it is a book which really should serve as the start of a study into the subject rather than being viewed as a conclusive end.

3 stars for The French Economy in the Twentieth Century 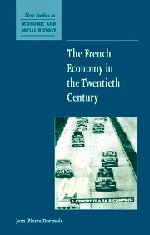