The History of Poetry

Poetry-making is much older than writing. Although its origins have been lost to history and can never be known for certain, the widely-accepted theory is that poetry arose in early agricultural societies, where it was spoken or chanted as a spell to promote good harvests. Certainly it was a part of religious rites and ceremonies in ancient Greece and Rome, and was the vehicle used for handing down the stories of the people's struggles and triumphs.

It is extremely difficult to define poetry and describe the difference between it and prose, and experts the world over have been understandably reluctant to do so. On the subject of definitions, the French poet Paul Valéry (1871-1945) remarked that anybody with a watch could say what time it was, but who could define time itself?

One attempt at a definition of poetry is that it is written (or recited) in lines--that instead of running on as prose does, it breaks at certain points.  There is a suggestion of this definition in the original Latin words for prose and verse: prosus meant 'going straight forth' and versus meant 'returning'.  In verse there is a tendency to repetition (to 'return') and to variation.  Of course, if it is the sort of verse that conforms to an elaborate traditional pattern, it can scarcely be confused with prose.  Even then, though, there are no handy rules for telling whether it is good poetry or bad poetry, a point often emphasized by the regular emergence throughout history of poets who were at first scorned, and later celebrated or vice versa.

The earliest known Western poetry consists of two acknowledged Greek masterpieces--the Iliad and the Odyssey. Both of these works are attributed to the legendary Homer, who is supposed to have been a blind wandering minstrel living in Greece in a period put at various times between the eleventh and seventh centuries B.C. The Iliad and the Odyssey are epics--that is, they are long narrative poems about the deeds of heroes. The Iliad tells of the siege of Troy and the Odyssey of Odysseus's (known to the Romans as Ulysses) wanderings after the siege and his journey home.

From its beginning, Latin or Roman poetry was heavily influenced by the Greeks. In the middle of the third century B.C. the Latin poet Livius Andronicus made a translation of the Odyssey--the earliest Latin poetry of any significance surviving today. The first work of real independence however, was the Annals of Ennius (239-169 B.C.), an historical epic of which only fragments survive. Many Roman writers who came after him are still deeply admired. They include Lucretius who in the first century B.C. wrote On the Nature of Things, which has been called the West's greatest philosophical poem--and Virgil (c. 70-19 B.C.) who, among other works, wrote the celebrated national epic, the Aeneid.

The medieval period witnessed the emergence of a variety of poetry written in the vernacular. The epic masterpieces of the age included the Old English alliterative poem Beowulf, France's La Chanson de Roland and the Spanish Poema del Cid. There was also religious poetry, versified romance, and lyric poetry (literally poetry to be accompanied by a lyre, but also subjective poetry imbued with melody and feeling).

The most celebrated lyric form of the period was the sonnet, which the scholar and poet Petrarch (1304-74) had perfected in Italy. Sir Thomas Wyatt (1503-42) introduced the form to Renaissance England, where Henry Howard, the Earl of Surrey (1517-47) is said to have fixed the rhyme scheme for the sonnet's standard fourteen lines: abab, cdcd, efef, gg. William Shakespeare (1564-1616) used the form to write lasting poetry.

The Earl of Surrey is also said to have invented blank (unrhymed) verse. The brilliant young poet Christopher Marlowe (1564-93) used this form in his writing for the English theatre, but his early death allowed Shakespeare to fashion blank verse into a medium for his own much-celebrated plays.

Perhaps the greatest Renaissance figure in English poetry was John Milton (1608-74) who, when aged and blind, created his masterpiece, Paradise Lost (published 1667). He was already blind in 1652, when he was acting as Latin Secretary to Oliver Cromwell's Commonwealth of England, and was assisted in carrying out his duties by another remarkable poet, Andrew Marvell (1621-78). Marvell belonged to a group of writers whose preoccupations won for them the title of the Metaphysical Poets.

Toward the English Romantics and Victorians

In 1711, Alexander Pope (1688-1744) published his Essay on Criticism in which he set out in verse his agreement with the theory that poetry involved imitation, that its subject should be conveyed through the poem's metre (rhythm) and sound.

The sound must seem an Echo to the sense...

Later, with the rise of the Romantic movement, the emphasis in poetry shifted to imagination and expression. William Wordsworth (1770-1850) spoke of the processes behind poetry as 'the spontaneous overflow of powerful feelings'.

Another of the great Romantics was Percy Bysshe Shelley (1792-1822), a poet of wide range and a passionate critic of privilege. Some of the ideas circulating after the French Revolution are expressed in his Song to the Men of England.

Wherefore feed, and clothe, and save,

From the cradle to the grave,

Those ungrateful drones who would

The towering poetic figure for the Victorians was Alfred Lord Tennyson (1809-92), whose poems were known by a great part of the populace. Works such as The Lotus Eaters were much admired.

It has been said that no more accomplished craftsman than Tennyson has ever written English verse. However, it is only recently that his reputation has begun to revive after the eclipse of Victorian taste in the early twentieth century.

In the nineteenth century, influential experiments in metre were made by Gerard Manley Hopkins (1844-89) and the American Walt Whitman (1819-92). Hopkins invented a 'sprung rhythm' suggesting natural speech, and in the United States, Whitman produced a free-verse style which was widely emulated.

Poetry now gradually came under the same influences as those that affected painting and music, and which made twentieth-century styles so different from those of all preceding periods.

In France, the poets Paul Verlaine (1844-96), one of the first Symbolists, called for vagueness and music in poetry, and Arthur Rimbaud (1854-91) made an influential demand for 'derangement of all the senses' and for the poet to become a seer.

In the early twentieth century, poetry was affected by the Dada movement, with its attacks on all tradition, and then by the Surrealists.

The first Surrealist manifesto (1924) was drawn up by the French poet André Breton: it urged artists to adopt 'pure psychic automatism', and to explore the world of dreams and the subconscious, of madness, drugs and hallucination.

'In the arts an appetite for a new look is now a professional requirement', wrote the American critic Harold Rosenberg in the early 1960s; and the need to 'make it new', to avoid the cliché (in attitude or words), to find fresh ways of expressing contemporary life is still the concern of a great many poets.

Should a Poet Write His Own Epitaph?

John Keats (1795-1821), like his contemporary Shelley, was a major figure among the English nineteenth-century romantic poets. Despite having created such great poems as Ode on a Grecian Urn and On First Looking Into Chapman's Homer, Keats, condemned to die young of tuberculosis, wrote a dispirited summary of his achievements for his epitaph: "Here lies one whose name was writ in water." But critics and readers throughout history have not agreed with him and it seems likely that the name of John Keats will last as long as English poetry is read.

World Poetry: An Anthology of Verse from Antiquity to Our Time
Buy Now 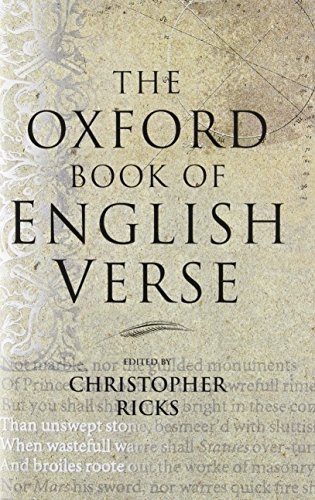