The Island is Victoria Hislop’s debut novel. It held the number one spot in the Sunday Times paperback chart for eight consecutive weeks and has sold over one million copies. It has been translated into more than 20 languages.

The novel is beautifully written and Hislop has a descriptive style with the ability to evoke beautiful imagery for the reader.

The novel begins from the viewpoint of Alexis, a woman who is reaching a crisis point in her relationship with her boyfriend, Ed. Alexis has always felt that her mother is hiding secrets from her past life as a child in Crete and therefore embarks on a voyage of discovery to her mother’s birthplace.

On arrival however she is shocked to find that her mother’s homeland is close to the island of Spinalonga, a former leper colony that now lies deserted. As she explores Spinalonga, she is unaware of the close emotional ties the island has to her own family. However, when Alexis meets an old friend of the family and ask her to tell her about her family, the secrets begin to unravel in ways Alexis had never suspected.

This is a gripping novel spanning four generations within which Hislop skilfully explores themes of war, love, death, illness and prejudice.

Alexis was now stranded on Spinalonga and felt a wave of fear sweep over her. Supposing Gerasimo forgot her? How long would it take before Ed came in search? Could she swim the distance back to the mainland? She had never been so entirely alone, had rarely been more than a few metres from the next human being and, except in her sleep, never out of touch with other people for more than an hour or so. Her dependency suddenly felt like a millstone and she resolved to pull herself together. She would embrace this period of solitude – her few hours of isolation were a mere pinprick of time compared with the life sentence of loneliness that past inhabitants of Spinalonga must have faced.

Victoria Hislop was born and raised in Tonbridge, Kent. She read English at St Hilda’s College, Oxford and worked as a journalist before publishing her first novel. She has written travel features for the Sunday Telegraph, Mail on Sunday and Woman & Home. Victoria won the ‘Newcomer of the Year’ award at the Galaxy British Book Awards in 2007.

Interestingly, Victoria spurned Hollywood interest in The Island and chose instead to allow the novel to be turned into a 26 part drama ‘To Nisi’ by Greek broadcaster, Mega. This proved to be the most successful TV series ever broadcast in Greece.

This is a vivid, moving and absorbing tale, with its sensitive, realistic engagement with all the consequences of, and stigma attached to leprosy, elevating it beyond holiday literature – Observer

Hislop carefully evokes the lives of Cretans between the wars and during German occupation, but most commendable is her compassionate portrayal of the outcasts – Guardian

The story of life on Spinalonga , the lepers’ island, is gripping and carries real emotional impact. Victoria Hislop … brings dignity and tenderness to her novel about lives blighted by leprosy – Telegraph

You can find out more information about Victoria at:

The history of Spinalonga

The island of Spinalonga is officially known as Kalydon and is a part of Crete.

Spinalonga was not originally an island but during Venetian occupation in 1526 it was carved out of the coast and a fort was built to strengthen the defence of the island against the threat of attack from the Turks and continuous pirate raids.

The island remained in Venetian hands until it fell to the Ottoman Turks in 1715. It subsequently became the refuge of many Ottoman families at the end of the Turkish occupation who feared Christian reprisals. During the Cretan revolt of 1878, only Spinalonga and the fortress at Lerapetra were not taken by the Christian Cretan insurgents. In 1881 the remaining Ottomans formed their own community on Spinalonga.

It was in 1903 when the last Turks had left the island that it became a leper colony. It was one of the last active leper colonies in Europe. Spinalonga ceased being a leper colony in 1957.

Today the island is uninhabited but is a popular tourist attraction. Tourist boats depart from Elounda and Agios Nikolaos on a daily basis.

Other books by Victoria Hislop

One Cretan Evening and other stories - September 2011 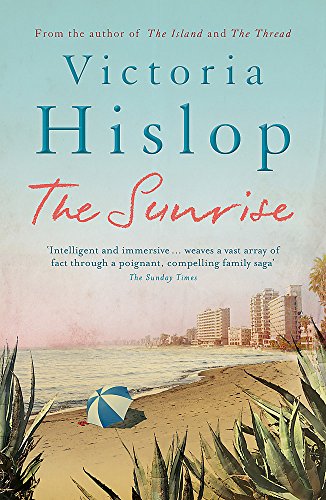 For more information about leprosy visit: