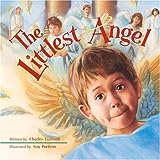 The Littlest Angel (ISBN 0824955757), by author Charles Tazewell has been in publication continuously for over 60 years, making it one of the most well-known Christmas stories ever published. It was first published in 1946 and illustrated by Katherine Evans. The Littlest Angel has been illustrated by many other artists, giving the book a slightly different and updated look as the years have passed, but the story has survived over 60 years of re-issues, with a popularity that has stood the test of time.

Not much is known about Tazewell. He was born in Iowa in 1900 and died in Vermont in 1972, and worked with the producers of a radio version of the story that featured Loretta Young, and a television version of his story that was produced by Hallmark. His name appears on the playbills of three broadway plays, mostly in minor roles, during the 1920s, long before he published the Littlest Angel. I'm not at all surprised by this tiny gem of information, since Tazewell's style exhibits an ease with the language, and a drama and sentimentality that could easily be explained by some stage acting experience.

The Littlest Angel is a story of the youngest angel in heaven--a little boy who doesn't know how to act angelic. In fact, he acts just like the little boy he was on earth. But in Tazewell's perfectly ordered heaven, the littlest angel struggles to find his place. His heart yearns for earth, where his boyish treasures lie. The littlest angel is messy, clumsy, always late, and he sings terribly off key. The other perfect angels in heaven don't quite know what to do with him.

When the birth of a Christ child is announced, all the angels excitedly gather to announce their gifts to the newborn king. The littlest angel only has his box of treasures, kept under his bed. It is all he ever had, and is the perfect gift of innocence. In a moment reminiscent of the story of the widow's mite from the New Testament, the Littlest Angel decides to give his box of treasures to the Christ child. But almost as quickly, he regrets his decision. In the dramatic conclusion, the hand of God rests on the Little Angel's gift, and declares it the best of all.

Broad Appeal of This Story

Charles Tazewell wrote the Littlest Angel in an era that pre-dated television, fast food, and video games. It was the era of radio, and Tazewell's sumptuous use of descriptive words and his smooth storytelling style almost reads like a radio script. Like other stories of the era, including The Little Engine that Could by Watty Piper and the Pokey Little Puppy by Janette Sebring Lowrey, this story doesn't spare words.

Yet Tazewell's story is broadly appealing to a diverse age group because Tazewell knows how to pace his story. Beginning with the Littlest Angel's admission into Heaven, where Tazewell's protagonist balances the strengths and tenderness of boyhood: the Littlest Angel stands defiantly at the pearly gates with his tear-streaked face eliciting immediate sympathy. The Littlest Angel's antics in heaven are humorous and propel the story forward. But thes humorous antics also draw a picture of the Angel's melancholy efforts to fit into Tazewell's ethereal and other-worldly heaven that seems solely the realm of grown-ups.

Tazewell was 46 years old at the time the book was first published, and the second World War was coming to an end. It isn't all that surprising that a story like The Littlest Angel emerged at the end of the second world war. The world was grieving for the souls of its lost sons and daughters. This story lays bare the collective grief of an era, and indirectly pays tribute to the many lives that were taken before their time.

The Littlest Angel has sold over 1 million copies during the last 60 plus years. During this time, the author has passed away, and the story has been republished using a number of different illustrators. Most of the versions of the story have stayed true to the original text of the story, though an abridged version of the story has been published in board book format for some of the different illustrators. Please note that you can see a slide show of their book covers with their ISBN numbers (if I could find them) or an Amazon ID. Because so many versions of the book are in print, you can buy an earlier version illustrated by Katherine Evans for almost the same price as a newly illustrated version of the story.

The rarest version of the Littlest Angel is the Silver Star edition published by Grosset and Dunlap. I have been unable to find this version to get a cover image. Here is the publishing timeline for the various books:

Did you enjoy this book review? You may enjoy some of my other Christmas book reviews. Check them out!

Please feel to explore some of my favorite children's books listed here!

Animals Should Definitely Not Wear Clothing by Judi Barrett · A Chair for My Mother by Vera B. Williams · Babies by Gyo Fujikawa · Brown Bear Brown Bear What Do You See by Bill Martin and Eric Carle · Charley Harper's ABCs by Charlie Harper · Christmas Cookies: Bite-Size Holiday Lessons · Chrysanthemum by Kevin Henkes · Daughter of a King by Rachel Ann Nunes · Excuse Me! By Lisa Kopelke · Gregory the Terrible Eater by Mitchell Sharmat · Harry and The Terrible Whatzit by Dick Gackenbach · Hilda Must Be Dancing by Karma Wilson · I Need My Monster by Amanda Noll · I'd Choose You by John Trent · Joseph Had a Little Overcoat by Simms Taback · King of Kings by Susan Hill · Ladybug Girl by Jacky Davis and David Soman · Lily's Purple Plastic Purse by Kevin Henkes · Llama Llama Mad at Mama by Anna Dewdney · Llama Llama Misses Mama by Anna Dewdney · Mister Seahorse by Eric Carle · No David! by David Shannon · Olivia by Ian Falconer · Out of the Ocean by Debra Frasier · Snowballs by Lois Ehlert · So Much by Trish Cooke and Helen Oxenbury · Souperchicken by Mary Jane and Herm Auch · The Gingerbread Boy by Paul Galdone · The Grouchy Ladybug by Eric Carle · The King With Six Friends by Jay Williams · The Little Red Hen and the Passover Matzah by Leslie Kimmelman · The Little Red Hen Makes a Pizza by Philemon Sturges · The Littlest Angel by Charles Tazewell · The Patchwork Quilt by Valerie Flournoy · The Red Shoes a Fairy Tale by Gloria Fowler and Sun Young Yoo · The Snowy Day by Ezra Jack Keats · Tikki Tikki Tembo by Arlene Mosel · Too Many Pumpkins by Linda White · Where the Wild Things Are by Maurice Sendak · Yoon and the Christmas Mitten by Helen Recorvits