In the Time of the Butterflies
Buy Now

Who are the Mirabal sisters, you ask? I, too, had not heard about them before I read Julia Alvarez's novel, In the Time of the Butterflies. It was brought to my attention when I was in the Latin American section at Barnes and Nobles.

Alvarez wrote and published this novel in 1994, and although it is historically accurate, it is fiction as it is told from the point of view of each of the four sisters each in a different section of the novel. Julia Alvarez is a Dominican and this book is about her compatriots.

It is a fascinating novel that jumps back and forth in time. It begins from the point of view of Dede, the second of the four sisters, and the only one to survive beyond November 25, 1960. You see, that is because her three sisters were assassinated by General Rafael Trujillo, dictator of the Dominican Republic.

It is also heartbreaking because the reader learns of each sister's joy and happiness in her childhood, marriage, and birth of her children while at the same time sacrificing her life for the betterment of her country and the life of her children. The reader sees each girl evolve into womanhood and each woman's evolution as a revolutionary.

The four sisters were involved in clandestine activities to bring democracy and civil rights to their island nation. The three sisters assassinated on November 25, 1960 were also known as Las Mariposas, the Butterflies, as they were referred to underground.

At the same time, all four of the sisters were loving wives and mothers who only wanted a better world for their children.

Their assassination turned the Mirabal sisters into symbols of both popular and feminist resistance throughout Latin America and world-wide.

They inspired the creation of the United Nations International Day for the Elimination of Violence Against Women created in their honor in 1999, and they are honored and celebrated every November 25. Please remember them on this day because these three women gave their lives so their children could grow up in a free and democratic country.

"we cannot allow our children to grow up in this corrupt and tyrannical regime, we have to fight against it and I am willing to give up everything including my life if necessary."

The Mirabal sisters grew up in a prosperous middle-class family of farmers. Their farm, in the Cibao region of the Domincan Republic, consisted of agriculture (cacao beans) and cattle. They also ran a store from their farm. They grew up in a cultured environment and the girls were well educated from a young age.

Their parents were Enrique Mirabal Fernandez and Mercedes Reyes Camilo. The four sisters were:

Patria and Dede were the more quiet girls growing up and Minerva and Mate were the more outgoing girls. But, one thing for sure, the four girls were close, loyal and loving towards one another.

Patria, Minverva and Mate all attended college, but Dede never attended college as her sisters did and worked as a homemaker and helped with the running of the farm and family business. Her husband, Jaimito, held her back from involvement with her sisters clandestine activities until much later when she rebelled against him and joined her sisters in their quest.

It was Minerva and Mate who attended the university in Santo Domingo and became true revolutionaries there. Patria attended for a short time, but ended her studies to marry and begin a family.

Patria joined their cause later after she witnessed a massacre of peasants by Trujillo's army while on a religious retreat in the mountains. She said she came down the mountain a changed woman after witnessing the death of young people by Trujillo's soldiers, and she then joined Minerva and Mate in their clandestine activities.

". . .it is a source of happiness to do whatever can be done for our country that suffers so many anguishes, it is sad to stay with one's arms crossed . . ."

General Rafael Trujillo was quite the ladies' man and when he laid eyes on a pretty young girl or woman he took them to bed. Young girls and women did not turn down el Jefe (the Chief) as he was called, when he waved his finger at them. So, when el Jefe layed eyes on Minerva, whom he thought beautiful, she, along with her sisters and her father, were invited to one of his parties at his mansion in San Cristobal.

El Jefe tried to seduce Minerva at the party, but she rebuffed his advances. Her father and her sisters left immediately with Minerva and drove home. But, no one rebuffed el Jefe and got away with it. Her father was immediately imprisoned and tortured. When he finally was released, he died a short time later and thus began Minerva's hatred of Trujillo. She would do anything to oppose him and bring his dictatorship to an end.

She studied law at the University of Santo Domingo hoping to bring changes to her country through the practice of law. But, when she graduated, Trujillo allowed her her degree but did not allow her a license to practice law. So, Minerva, along with her husband, began working underground, to rid the Dominican Republic of Trujillo and bring civil rights and democracy to her nation.

They were inspired by Fidel Castro and his revolution to get rid of Cuba's dictator, Batista and Fidel's take over of Cuba. Their revolution though was to bring democracy not communism to the Dominican Republic.

Their group was not an active terrorist group but rather they distributed information pamphlets about Trujillo's victims. They informed their nation about what truly happened when Dominican citizens just disappeared. Minerva's underground name became La Mariposa, the Butterfly.

A few years later, Mate came to the University of Santo Domingo also to study law. When she discovered her sister and brother-in-law's activities she joined them. Here she met her husband to be and the two of them became anti-trujillistas.

After Patria witnessed the massacre in the mountains, she and her husband also joined Minerva, Mate and their husbands, and their group became known as The Movement of the Fourteenth of June, which was the date of the massacre that Patria had witnessed.

From then on, Patria, Minerva, and Mate became known underground and eventually throughout all of the Dominican Republic as Las Mariposas (the Butterflies).

At this point, Dede had not yet joined her sisters as her husband forbid her to join them.

". . . perhaps what we have most near is death, but that idea does not frighten me, we shall continue to fight for that which is just . . ."

As time went on, The Movement of the Fourteenth of June, became more involved in rebellion than just passing out pamphlets. They took part in moving arms throughout the island and even buried some on their lands. They became part of the armed resistance against Trujillo.

Minerva and Mate where caught and arrested along with their husbands, as they were transferring arms from one area of the island to another. The women were incarcerated in the prison La 40 and the men were incarcerated and tortured at La Victoria Penitentiary in Santo Domingo.

Minerva and Mate were interrogated but there is disagreement as to whether they were tortured. Some sources say they were and some say they were not because of international pressure being applied to Trujillo. The international community was slowly becoming aware of Trujillo's tactics. In 1960, the OAS, Organization of American States, condemned Trujillo's actions and sent observers to the prisons to inquire about political prisoners.

By now, Las Mariposas had become very well known, admired and beloved by their countrymen throughout the island. Trujillo could not stand this. No matter what he did to them, no matter what lands or possessions of theirs he confiscated, the three women continued their fight against him.

Eventually, their husbands were transferred to another prison in the mountains and it was treacherous driving there. But, that did not stop Patria, Minerva and Mate. They hired a driver to drive them up the mountains to the prison.

After visiting the husbands, the three sisters decided to have the driver drive them home that night rather than spend the night in a nearby town. As the Jeep drove down the narrow mountain road, they were stopped and ambushed by Trujillos' secret police.

The three sisters and the driver were dragged from the Jeep into the sugar cane fields and clubbed to death. It is believed the three sisters were also raped. Their bodies were put back in the Jeep they had been driving and the Jeep run off the mountain road to make their deaths look like an accident. Minerva was age 34; Mate was age 24; and Patria was age 36.

When the Jeep, crashed over the mountain cliff, was found, the entire Dominican Republic island nation knew that the three sisters had been assassinated by Trujillo. The murder of the Mirabal sisters began the end of General Rafael Trujillo and his regime.

The Dominicans wouldn't stand for the sisters' assassination or the continued tyranny of Trujillo's bloody regime. Trujillo himself was assassinated six months later in May 1961. 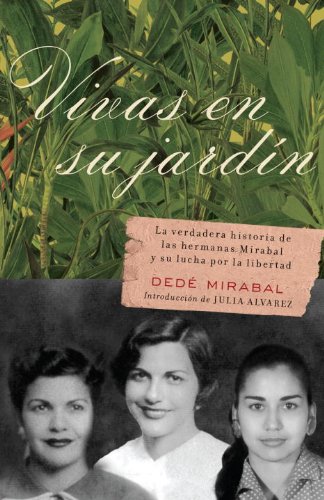 Dede, who had recently joined the fight with her sisters, was not with them when they went to visit their husbands in the mountain prison that infamous day. She had stayed behind to mind and watch all the children. She was devastated when she heard of the "accident."

After the assassination, Dede devoted the rest of her life to the legacy of her sisters and the raising of their six children. The children called her "Mama Dede."

In 1992, Dede founded the Mirabal Sisters Museum in her home town of Salcedo. In 1997 the Mirabal sisters were recognized as national martyrs in the Dominican Republic.

In 2009, Dede published her own book about her sisters, Vivas en su Jardin.

Minou Tavarez Mirabal, Minerva's daughter, has served as deputy foreign minister (1996-2000) and as deputy for the National District in the lower house (2000 to present).

Jaime David Fernandez Mirabal, Dede's son, is the current Minister for Environment and National Resources and is the former vice-president of the Dominican Republic.

They have seen come true their mothers' dream of a free and democratic Dominican Republic and for which three of their mothers gave their lives.

Dede, who divorced her husband, lived in the house where she and her sisters were born in Salcedo until her death at age 88 in 2014.

So, this November 25 on the International Day of the Elimination of Violence Against Women that was inspired by the Mirabal sisters, take a moment to reflect on the lives of four sisters who dreamed of a free and better life for their children. Although three of them gave their lives for it, their dream came true.