The Non-Person: An Analysis of William Blake Poems "The Chimney Sweeper" and "London"

Philosopher and author Giorgio Agamben analyses the position of the “non-person,” a person with no legal status or any record of their existence in his work, Homo Sacer . Similarly, William Blake (1757-1827), a craftsman and poet, writes about people in British society during his time that can be identified as non-persons. For example, “The Chimney Sweeper” (1789) describes the terrible living conditions of young children working as chimney sweepers in Britain during the French Revolution. This eerie poem is narrated by a young chimney sweeper and illustrates that he and his peers are unaware of their position in society. This essay will analyze the poem through its form, message and comparison to other works by William Blake.

This poem is narrated by a nameless child, who does not give the reader much information about himself. The first line of the poem is about his mother’s death; the second describes his father selling him as a chimney sweeper. By not talking about his condition in the first lines, he diverts the reader’s attention away from himself, which shows that he may not think his life is worth mentioning. He does speak about himself, or rather, his tongue, in the third line: “…yet my tongue/Could scarcely cry ‘weep! ‘weep! ‘weep!” This line should not be interpreted as the narrator’s protest. Because he is so young, the narrator cannot pronounce “sweep.” So instead of being aware of his condition, the narrator has accepted his life without protest and is crying without being conscious of it. The next line, “So your chimneys I sweep, and in soot I sleep,” Blake writes “your chimneys” to involve the reader. This accusatory statement causes the reader to think about their involvement in this inequality. This is the last line of the first stanza and the last time we hear about the narrator’s personal condition. Blake is showing the reader that the narrator does not place value on his life, which is why he resists giving us information about himself.

The rest of the poem is about a boy named Tom Dacre, who is new to this lifestyle and aware of his undesirable condition. Tom cries intentionally, unlike the narrator, when he gets his head shaved. Chimney sweepers would often get their hair shaved off in order to fit into the chimneys more easily. The narrator attempts to console him by saying, “Hush Tom! never mind it, for when your head’s bare,/You know that the soot cannot spoil your white hair.” The white hair is meant to show that these children are old—however, not by today’s standards. Because their life expectancies were so low, these children are late into their lives at a very young age.

“The Chimney Sweeper” is a poem found in Blake’s collection entitled, Songs of Innocence . Many of these works have a trochaic pattern, similar to that of a nursery rhyme. A trochaic pattern is usually made up of four line stanzas that consist of two rhyming couplets; (the rhyming pattern can be illustrated as, aabb ccdd eeff…). Blake writes in this fashion to draw readers in and cause them to expect a traditional storyline. The morbid themes within “The Chimney Sweeper” surprise the reader because of its form and rhyme scheme. 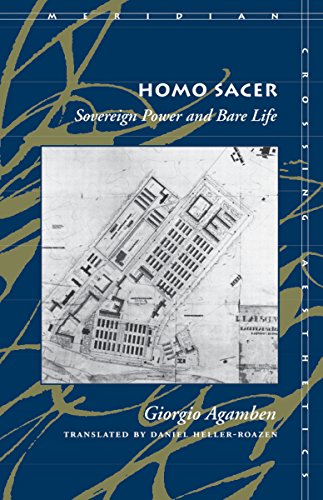 Tom has a dream in the third stanza, “that thousands of sweepers, Dick, Joe, Ned, and Jack,/Were all of them locked up in coffins of black.” To these children, life is a living death. Although they are amongst thousands, knowing they are not alone, Blake is forcing the reader to see how many children are living like them and dying like them. While the narrator is unaware of the dreadful condition that they live in, Tom Dacre is until he has this dream and an angel tells him that he will go to heaven if he is good. The poem ends with this bitter-sweet couplet: “Though the morning was cold, Tom was happy and warm;/So if all do their duty they need not fear harm.” Although harm is inevitable, they will not be afraid anymore, because they are both unaware of their condition in the end. If we look at these children as the non-person that Agamben describes, we see that they have no inability to protest—they accept their lives because there is no other choice for them but death.

While “The Chimney Sweeper,” from Songs of Innocence focuses on the conditions of the non-person, Songs of Experience is made up of works that discuss people who are aware of their terrible conditions and must live through them. In “Garden of Love,” Blake illustrates a movement from innocent or not guilty to shameful. Although this poem more deeply illustrates Blake’s views of Christianity, it also focuses on the difference between the aware (adults) and the unaware (children). The narrator of this poem is an older man who goes to a place where he used to play. It now has a chapel “in the midst” that excludes people from it. This causes the narrator to resist feeling pleasure. Unlike “The Chimney Sweeper,” he is aware of his restrictions.

Another poem within Songs of Experience is “London,” which describes a man, the narrator, walking through London streets. He hears babies crying, soldiers sighing, and child prostitutes. He describes it as a place that many people are simply born into. The last lines of “London” are: “But most thro’ midnight streets I hear/How the youthful Harlot’s curse/Blasts the newborn Infant’s tear,/And blights with plagues the Marriage hearse.” These lines expresses a theme similar to that described in “the Chimney Sweeper”—a living death.

Earlier in “London,” he writes, “In every cry of every Man,/In every Infant’s cry of fear,/In every voice, in every ban,/The mind-forg’d manacles I hear.” He capitalizes the different characters in this poem to show their significance. He also refers to them in the singular rather than in the plural in order to show that they are all non-persons that should be identified as individuals instead of being forgotten like they are. The “mind-forg’d manacles” describe that the things that are banning people from experiencing pleasure are not physical limitations, but rather, they are made up by the mind.

Blake illustrates the ways in which the innocent and experienced are affected by their living conditions in Britain during the French Revolution. The innocent are unaware of how terrible their lifestyles are and live on, without protest, through the horrible conditions of the living dead. The experienced are aware of their condition, their restrictions and exclusions, and they live on with the knowledge of their position in society. Blake wants his reader to see the morbid, terrifying images that his works portray so that we will not become one that contributes to this unfortunate pattern.