Brian Keene's The Rising: A Review

With a few published short stories to his name, James aspires to become a successful novelist in the horror genre.

I wonder what Keene's inspiration was when he came up with 'The Rising'. The story will put you right in the middle of the action right from page one. A real fast paced page turner that is instantly difficult to put down. I know that zombie stories have been done to 'undeath' but Keene has successfully flipped all zombie lore upside down, giving these monstrosities a purpose and a thought process, all to give them a more frightening appeal. Forget the traditional hobbling creatures of pulpy mush who's sole purpose is to feed, they have been transformed into menacingly intelligent beings.

The story starts with Jim, a desolate, depressed man hiding in an old bomb shelter. His wife and unborn child are among the demons wandering above ground, no longer the people they once were, but bloodthirsty animals desperately trying to claw their way through the shelter walls. Worst of all, Jim is fearful for his young son who lives clear across the country. Is he alive? Is he a monster? Has his ex wife kept him safe? The torture of not knowing and not being able to act is slowly driving Jim to insanity. Driven by grief, and the fear of having to share the same fate as the rest of humanity, he puts a gun in his mouth. As he's about the pull the trigger, his cell phone miraculously rings. On the other side, his son's desperate pleas for help. With a renewed sense of purpose, Jim ventures onto the hellish streets. On his way he'll meet Frankie. She may have been a hooker and heroin junkie before the world's collapse, but her street smarts and tough as nails survival instinct make her an amazing ally.. An elderly but ever faithful preacher named Martin uses both his wisdom and his beliefs to keep Jim grounded. Baker, a brilliant scientist seeking redemption after assisting in bringing about the apocalypse, uses his intellect to get himself out of trouble, and proves a valuable ally . Together, this rag tag team must overcome personal obstacles to ensure their own survival.

Find 'The Rising' in any form here 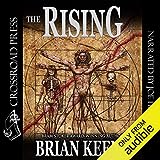 This novel is incredibly graphic and nasty when it comes to the horrendous creatures and their actions. The emotional impact is huge. You feel Jim's desperation, Frankie's sense of survival, Baker's regret and even Martin's holy faith. These characters are so incredibly well written that it's almost like you could reach out and touch them. They represent the everyday unlikely people that are more than meets the eye. At the end of the day, anyone of these great characters would make a great ally to have by your side.

This novel is paced really well. Finishing in just under five days, I couldn't tear myself away. Totally engrossing and inviting, Keene wants to bring you into his twisted world and never let you go. The story is very believable. With all the nuclear and biological weaponry being done in the world today, it is entirely conceivable that some sort of chemical agent could reduce humans to ravenous beasts. Some over zealous anti government military faction will try to enslave the remaining members of the species. Okay, maybe that stretches it just a little bit, but who knows.

Along the lines of Edward Lee and Richard Laymon, Keene really knows how to take the reader on a journey through the eyes of their protagonist. I've been reading horror novels for many years and Keene's 'The Rising' is one of the very few instances where I've really felt even the slightest tinge of fear. I think what really makes this story terrifying is that things are very plausible. Yes, the zombies add to the experience, but the bio research, the corrupt military turning survivors into slaves and scientists playing God, really makes you wonder where humanity is heading. Did Keene knowingly paint a portrait of what our futures could be? One thing I'll give Keene credit for is his story telling. I could feel every single scratch, break and bite that our heroes had to endure. Even though some of their actions are questionable, I still find myself sympathizing on their behalf. Absolutely perfect novels deserve a perfect score.

Have you read 'The Rising'? Rate it here!

5 out of 5 stars from 1 rating of The Rising