The Sharing Squirrel; a Short Story on Sharing and Caring

Bachelor's degree in English. Middle school language arts teacher with over 20 years experience with a specialty in reading. 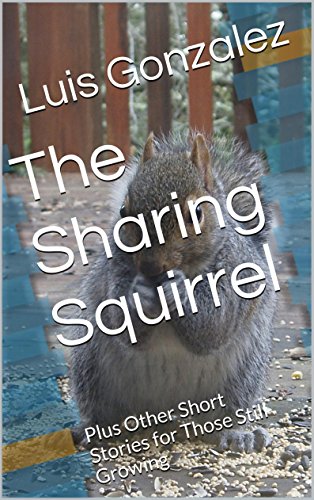 The Sharing Squirrel: Plus Other Short Stories for Those Still Growing
Buy Now

There once was a squirrel and a hard worker indeed and could always be seen gathering nuts and other goodies for when the weather would turn ugly and mean and snow would cover the ground and trees would no longer give her some nuts to eat.

Other squirrels spent their days doing the same, as squirrels do, but always marveled as how sharing this particular squirrel was for you see, this squirrel was always gracious and although she got just enough for her to eat, she always shared.

There were some mice that always had a hard time getting enough goodies to store for the winter; there were some ground hogs which fared the same, always finding it difficult to gather enough to get them through the winter. Even some flying fellows who could only gather so much as their beaks were small.

Yet the squirrel never held back, she would always share what she had when any came calling. The other squirrels that lived in the same magnificent tree as our furry friend, kept admonishing her for giving what she worked hard to get. “They should fend for themselves, you will need all that you get to last through the winter” they often said.

She usually responded with the same words, “Those who give shall receive.” Besides I have enough and what’s the sense of having so much that I could not use, it’s a shame to let it go to waste when others are in need. “Together we’re strong and fat bellies we’ll have.” She went on with a kind of a hum.

The other squirrels could not understand her giving attitude for they were used to gathering as much as they could find, even if they could not possibly eat it all. That was the law of the land, they used to claim and never let the sharing squirrel have any respite for her caring ways.

One fine cold day, as fine cold days go, the early snow started to fall, and every single creature made last preparations to gather the final goodies that would keep them through the winter.

The caring squirrel did the same as she always did. She gathered a few final nuts and berries and stored them. Then she, while perched on her nest, saw some mice cowering in their burrow and some ground hogs shivering in the snow plus some flying fellows huddling in their nest. She hurried to them and offered some of what she had in store. All partook of some of her supplies and thanked her greatly.

The other squirrels were totally irritated by her behavior. “You will suffer now that you have less than before, when the winter comes and you are hungry do not come looking for us as you have freely given that that was yours.” They yelled at her.

The sharing squirrel was just as worried and hoped for the best. Soon she spied in the distance a group of mice plus a group of ground hogs and guess what? The flying fellows were coming too.

The other squirrels complained, “Now that we don’t have anything these vagrants will come and ask for more?"

To everyone’s surprise, the mice were bearing gifts as many nuts they brought, the ground hogs did the same carting many big seeds together with edible twigs and the flying fellows brought the sweetest berries that nature had. They gladly shared with the sharing squirrel.

The other squirrels looked in amazement as the caring one now had more than before, enough to last her three winters, and they lowered their heads in shame for having bashed her and for thinking badly about her friends.

The sharing squirrel, as caring squirrels do, offered them part of what she had. Thanks to her generosity others had repaid her kindness and all made it through the winter.

The following winter not a mouse in sight, not a ground hog too, not even the flying fellows were seen by themselves. They were all together squirrels and all. Sharing and caring, eating and singing with all they had gathered before the cold winter.

They made a song together that year and wherever they gathered this tune you would hear, “Those who give shall receive, for together we’re strong and fat bellies we’ll have.”

Would you read this to your children?