The Sound and the Fury by William Faulkner

Book reviews are a fun way for Phyllis to let her readers know which books are great or which ones are not so great.

William Faulkner's The Sound and the Fury, was published in 1929. It was written in the Southern literary style. Faulkner is considered by scholars as one of the most important writers of this genre in the United States.

This is a unique writing style of the American South, which focuses on the significance of family, religion, community, use of Southern dialect, and a strong sense of one's place in personal and social life. A major common theme within this type literature focuses on the troubled history with racial issues, the American Civil War, and Reconstruction.

Location of birth and residence is not the defining factor of a Southern literature writer. Some writers who lived further north were considered to be in this genre. However, William Faulkner was born in New Albany, Mississippi and lived nearby in Oxford all his life. He was not only a Southern literature writer, he lived in the land where his stories take place. He wrote that way of life as he saw it, as he lived it.

The total life span of Faulkner's parents and himself, and where they lived is an extraordinary part of American history.

Murry Cuthbert Faulkner, William's father, was born in 1870 and died in 1932. His mother, Maud Butler, was born in 1871 and died in 1960. William was born September 25, 1897, and died on July 6, 1962, just two years after his mother passed away. Within these ninety-two years, changes within that time frame made a tremendous impact on American history -- this timeline made a strong influence on Faulkner's writing style and subject matter. In all his writings the history and traditions of the South are strongly infused.

Faulkner's greatest influence on his creative imagination came from the three women closest to him in childhood and adolescence years. His mother and maternal grandmother were avid readers, painters, and photographers. This heavily influenced and educated Faulkner in the development of his artistic imagination and visual arts.

Caroline Barr (the black woman who raised him from infancy) was also a major part of his education, being a life-long central figure in his life. It was because of Caroline Barr that Faulkner was so preoccupied in his writing with the politics of sexuality and race.

In this novel, Faulkner used a technique called "stream of consciousness", among a few other narrative styles. This narrative mode is a literary device that depicts the many thoughts and feelings that pass through the minds of the characters in the story. James Joyce and Virginia Woolf, European novelists, also used the stream of consciousness style.

The thought processes of a character is an interior monologue, so the stream of consciousness technique is the written equivalent of that character's thoughts. A person's thoughts do not always flow in an organized manner, they jump around hither and thither, past and present, and are often disconnected. Nor do thoughts contain proper grammar and punctuation. Therefore, reading a story that uses this technique is difficult for some readers.

The Sound and the Fury

Faulkner's novel, The Sound and the Fury, was published in 1929. It was deemed one of the "100 best English language novels of the 20th century", by the Modern Library in 1998.

This was his fourth novel and did not receive much acclaim until he published Sanctuary, his sixth novel, which was Faulkner's commercial and critical breakthrough. The two novels established his literary reputation.

"Life's but a walking shadow, a poor player That struts and frets his hour upon the stage And then is heard no more: it is a tale Told by an idiot, full of sound and fury, Signifying nothing."

Macbeth, Banquo and the Witches

Like most of his stories The Sound and the Fury is set in the fictional Yoknapatawpha County, a setting Faulkner created based on Lafayette County, where he spent most of his childhood.

In true Southern literary style, Faulkner wrote a fictional story on the history of the Compson family, former Southern aristocrats who are struggling to deal with the dissolution of their family, its reputation, and tragic deaths. There are four parts to the novel -- the first three are told by a descendant of the family, each with their own disjointed narrative style and each from a different perspective.

None of the narrators (descendants) seem to be of sound mind -- therefore, the Macbeth line "Told by an idiot, full of sound and fury", soon becomes apparent why Faulkner chose that title. 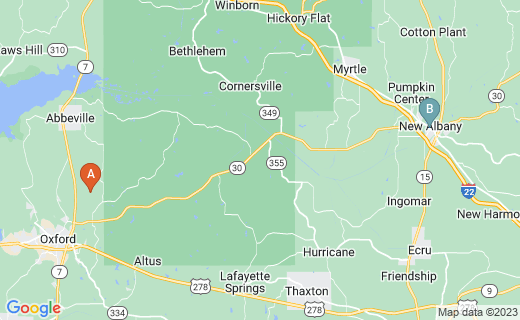 Faulkner based his fictional county, Yoknapatawpha, on Lafayette County, Mississippi.

The Sound and the Fury covers a time period of thirty years or so in the early 1900s. Faulkner opens the thoughts of the characters to give the reader a glimpse into the mind of each person. The novel is separated into four distinct sections.

This first part is written from the perspective of Benjamin "Benjy", a 33-year-old man with severe mental handicaps. This is another factor in the difficulty of reading the story, for, along with the stream of consciousness technique of the author, Benjy does not think like most people. Benjy has an uncanny sixth-sense.

Benjy is often shunned and an "embarrassment" to his family. The only two people who really care for him are his older sister, Caddy, and Dilsey, the family's long time servant. Caddy was banished from the family because the child she carried was not her husband's. This played havoc with Benjy's mind, for Caddy was his passion in life and loved him.

The second part is from the thoughts and feelings of Quentin, Benjy's older brother.

Quentin is the more intelligent of the Compson children. Faulkner uses Quentin as the best example of his stream of consciousness narrative style. Quentin's thoughts are even harder to understand than Benjy's. Near the end, when Quentin has gone off the deep end, his thoughts are jumbled, no sentences, no grammar or punctuation at all - it all runs together with no beginning and no end.

Quentin also has an obsession with Caddy, his sister. As a Southern gentleman he believes in chivalry, taking care of women. He is very protective of Caddy and tries to defend her promiscuity. After Caddy married and was again banished by her husband, Quentin tried to help her to no avail. After he leaves for Harvard, he befriends an Italian girl who does not speak English. Quentin, in his mind, replaces Caddy with his friend, even calls her "sister" and wants to take care of her, but the girl does not understand. His mind wanders over all the sorrow and sadness of losing Caddy, the loss of the friend, the downfall of the South after the Civil War and he becomes ever more tormented. Quentin ends his own life.

In this third part, Falkner gives Jason the gift of linear thought, a more understandable narrative technique. Jason's narrative is a straight to the point type of thinking and this part gives more clarity in the family and household affairs. Jason is the favorite of Caroline Compson, the mother, who is an abusive hypochondriac. He is her third child.

Jason is the only successful sibling in terms of wealth and providing financially for the family after the father died. Jason is intelligent, yet self-centered and inherits Carolyn's cynical attitude. He is not above deception, blackmail, and other dastardly deeds.

In Dilsey, we see the only member of the household who stands proud, and retains the strength of faith in the midst of a family that lost their standing, reputation and is slowly dying. Dilsey sincerely makes an effort to help. Dilsey is the matriarch of the family servants. She provides a view of the family from a third-person perspective.

Sixteen years after the novel was published, Faulkner wrote an appendix which provided some clarity and a complete history of the Compson family. In the appendix, the lineage of the family begins with the first ancestor to come to America. From Quentin Maclachian in 1779, the family history is revealed and takes the reader through 1945. The appendix was originally published in "The Portable Faulkner" then later included in subsequent printings of The Sound and the Fury.

In 1956 The Paris Review, a literary quarterly magazine, conducted an interview with Falkner wherein he said:

"Let the writer take up surgery or bricklaying if he is interested in technique. There is no mechanical way to get the writing done, no shortcut. The young writer would be a fool to follow a theory. Teach yourself by your own mistakes; people learn only by error. The good artist believes that nobody is good enough to give him advice. He has supreme vanity. No matter how much he admires the old writer, he wants to beat him."

"Don't be a writer - Be Writing", William Faulkner

In 1949 Faulkner received the Nobel Prize in Literature. The Sound and the Fury was a critically acclaimed novel that was an important factor for the esteemed honour. Most scholars consider this novel a masterpiece.

Although the novel may be shunned by readers as too difficult to read because of the narrative style, it has been considered essential and highly influential in the development of the stream-of-consciousness literary style.

Are you familiar with Faulkner's style of "stream of consciousness" writing and do you like it?