A science fiction writer by the name of HG Wells, born in the year 1866, wrote many stories using available scientific theory woven around a little fantasy.

One of them was about a device called the time machine. You guessed right. This machine enabled traveling through time, forward as well as backward.

Jarvis* the main character in the story, a scientist himself, expresses his opinion on "time."

He had stated that time is just like space, and that one could move forward and backward in time just like being able to move likewise in space.

The prospects of travelling forward and backward in time seemed really exciting, but Jarvis needed to provide some proof of his theories.

For this purpose all he needed to do was to build a machine by means of which he could travel in time in the direction of his choice, forward to the future or backward to the past.

That's right, what he needed was a time machine, to facilitate time travel and to prove his theories right!

He gets about the task in no time and starts work on building his time machine.

The air of simplicity given to this venture was such that inventing a time machine was just a trifle. Sounds almost as if anyone could do it!

All you need to invent a time machine was ... well, the list of items has been kept secret lest it becomes a commercial venture!

At that time science was not made use of for commercial ventures as much as it is today. Science was something accademic and scientists were never after fortune.

They achieve fame, although that has never been their target. The fortune that follows has only been incidental. They were only hell bent on proving their theories right. That's all there was to it.

In the illustrated version of the story, the artist has created an image of the time machine using the author's description of it.

Of course as stated previously, the "how to" part has been excluded even in the original version of this science fiction novel!

Time Travel - Just One Step Away

This time machine that Jarvis has put together resembles a present day overgrown exercise bicycle, with a handle bar to hold on to.

There is a control panel on which two levers are mounted, alongside some dials with pointers, resembling analog speedometers.

The time traveler just occupies the seat and then pushes a lever, and then "whoosh," off he goes into time.

Very conveniently the functions of the two levers are, one to move forward and the other to move backwards in time. Very user friendly indeed!

The "forward and backward" element is a must for all time machines, for, what use would it be if one goes into the future or past and cannot get back to the present?

There is absolutely no mention about the mechanism behind this invention, and the propellant or principle which governs it's functions.

The main focus of the tale is on the traveling part only. One could argue that this is more adventure oriented than a work of science fiction.

The hero of the story puts the finishing touches to the machine, and takes a test drive. He just pushes the future lever by a fraction, and then notes the result.

The wall clock in his laboratory, in which the time machine is parked, indicates that so many hours have elapsed, proving that he has moved forward in time by the number of hours the clock has registered. The test flight was successful.

The machine works! He thought to himself and then unceremoniously takes that small step of pulling the lever a little further, with the hope of making one giant leap into the future.

With my profound apologies to Neil Armstrong, I continue this description. That one small step hurls him into the future by 800,000 years. What a giant leap!

The time taken to reach this destination is unknown. He just traverses forward, with events of the future coming into his line of vision just like a film unfolding, in a sequence. 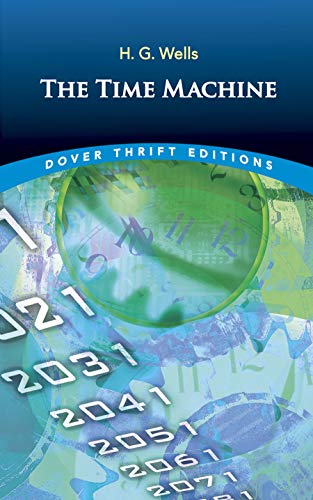 The Journey - A Commentary

Motor cars and vehicles, space rockets, modern buildings appear before him as he passes our era or the present era. Then there are visions of ruins too, of wreckages and buildings of shapes that are not familiar to us.

When Jarvis feels he has gone far enough, he releases the grip on the lever in the control panel of the Time Machine and then comes to a halt. The meter on the panel indicates that he has traveled forward by 800,000 years. Ouch!

There is controlled vegetation all around him, and buildings which are different to anything familiar to us. Jarvis is greeted by a curious group of denizens of the future.

They are all dressed in designer rags, both males as well as females. They are small made and good to look at. This species seem to be flower powered, grass loving and rather meek.

Sign language enables communication, and Jarvis the tourist is shown around by these enthusiastic people. He learns that these people are the Eloys.

A museum which he visits later on, contains all the horrors of the past. Instruments of partial and total destruction are displayed, from the simplest to the most advanced.

He partakes in a meal with them. Meal? Yes, the meal consists of fruits, nuts, legumes and leaves. Looks like these future cats are non carnivorous!!!

Adventure In The Future

Right! Now the stage is set for an adventure to unfold, and it does!

An adventure involving Jarvis, the Morlocks and the Eloys gets under way.

Jarvis is captured by the Morlocks, and he manages to escape, thanks to his strength and his wits, and of course a box of matches he had found in the museum.

Since light repels the Morlocks, striking a match temporarily blinds them. And so the box of matches helped him make his getaway from the underground domain of the Morlocks which he chose to explore.

On getting back, Jarvis is wearied by all this. He wants to go back home, but his time machine is missing.

The Morlocks have taken it! It was just outside the door of what he later learns to be an entrance to the domain of the Morlocks.

Get Back To Where You Belong - Back To The Past

He then forces open this door and to his relief finds his time machine there. However as he enters, the door bangs shut. He is trapped once more by these strange eerie underground creatures of the future!

Fortunately Jarvis had already removed the two control levers and put them away safely into his pockets. Now he just screws them back and just in time to evade a Morlock onslaught, and pulls the "go back in time" lever.

Moments later he is back in his laboratory. Safe, in the era to which he belongs. The time machine has moved from one end of his laboratory to the other. This is the distance the Morlocks had moved it.

Whew! What a relief! Knowing what the future holds in store for us I might as well stay in the present!

Morlocks ... Eloys, who wants them anyways? The Morlocks are too obnoxious to behold, and the Eloys are too meek to hang out with! I would prefer this era to any other. Time machine or no time machine, I strongly believe that we are in the best of times although most people scream we are in the worst of times. What do you think?

The hero* of the story writes in the first person, and does not introduce himself to the reader by his name.

Nowhere in the story is his name revealed.

There are occasions in which he is in the company of his friends, and they address him as "man," saying things like "what happened to you, man?"

In the course of his adventures in the future, when he speaks to the Eloys he introduces himself by saying "me man."

Even when he gives a crash course in English to one of those Eloys he still prefers to refer to himself as "man."

This story is set in a place called Richmond in England, and for the sake of convenience, I chose to give him a typical English name, "Jarvis."

My apologies to Mr Herbert George Wells, the author of "The Time Machine."

The Speed Of Light And A Little Beyond That

A Quick Note On Science, Time Travel And Your Involvement

Albert Einstein stated that time can be pierced by travelling at the speed of light.

Einstein's theory associates the speed of light as the only ingredient necessary to conquer time.

Most of his theories, if not all, require an understanding of a little bit of mathematics and a lot of pondering.

There are of course many obstacles to reaching the speed of light. Even if these obstacles are overcome. a lot more has to be considered by scientists before any kind of launch into time travel gets under way.

My article entitled "Light As We Know It" contains a brief description on the speed of light and a little beyond. I am in the process of updating the "little beyond" part of it.

If your interest in time travel reaches up to beyond the basics, and if you are on square one, your first step will be to know the very basics of light, then you need to know the behaviour of light under different conditions.

You then need to fully understand the speed of light and grab the concept mathematically as well. Then your understanding of space and matter also will gradually expand.

You will begin to understand that space, time, and matter are connected such that one cannot exist without the other.

When these things begin to become clear, and begin to set in, and trigger off thoughts in you, you are well on the way to even forward your very own theories on time, and time travel.

And with the passage of time ... who knows, you might even be the very first to invent a working model of a time machine!

What Do You Think of Time Travel?

Do you think time travel is possible? If so, do you think it is it safe?