Yeah, I know these ladies aren't real, but these characters have fueled the fires of many a FanBoy (and Girl), and some of them hold a special place in the hearts of comic book fans everywhere.
Heck, where would cosplay be without these ladies?

Some are good girls and some are bad girls, and some that really can't make up their minds just what they are.
But that's a woman's prerogative isn't it?
So here are my top ten favorite comic book heroines...

Phoenix
Ahh what humble beginnings she had to wind up as one of the most powerful beings in the Marvel Universe...or any Universe for that matter.
I guess it just goes to show that a woman can accomplish anything.
Phoenix started out as Jean Grey, Marvel Girl, in X-Men number 1 in September 1963.
Her character biography could fill a Hub by itself, and its been switched and altered so much that my mind just prefers to stay with the "simple" John Byrne/Chris Claremont version.
But in any version, you have to admit that she went a long way from the girl in the green mini skirt that just pointed at things, to the being that could rip worlds apart.
The lovely Famke Janssen played Jean Grey/Phoenix in the X-Men films.

Wonder Woman
One third of DCs "Trinity" along with Superman and Batman.
Of course the Amazing Amazon started out way before Jean, back in December 1941 in All Star Comics #8.
Wonder Woman was created by William Moulton Marston writing as Charles Moulton, and if you don't know anything about him, Google him..he's pretty interesting.
To many of us, Lynda Carter is and will always be Wonder Woman, and that may be why the proposed movie idea keeps getting put on the back burner.
And don't even get me started on David E Kelly's failed Wonder Woman pilot.
If you saw it, you know why it failed.

Catwoman
The Feline Fatale started out even before Wonder Woman, back in Batman #1 in the Spring of 1940.
Of course then she was just a mysterious burglar and jewel thief called "The Cat".
But she went on to become one of Batman's greatest foes and oddly enough love interests.
Again, her origins are so tangled up and convoluted that I think the best thing to do is basically pick your own.
And yes, I have to weigh in here and say that Julie Newmar, not Michelle Pfeiffer, was my favorite Catwoman.
But now we get to see how well Anne Hathaway does in The Dark Knight Rises.

Poison Ivy
Isn't it odd that an otherwise minor villain can hang on through the years and become so popular?
Ivy is a relative newcomer compared to Wonder Woman, Catwoman and even Phoenix.
She first showed up in Batman 181 in June of 1966 and is probably comics first eco-terrorist.
I really think what kick started her popularity was her appearing on Batman: The Animated Series, but that's just my opinion.
Uma Thurman played Ivy in the 1997 fiasco "Batman and Robin".

Supergirl
The Maid of Steel (do they still call her that anymore?) first appeared in her most popular version in Action Comics #252 in May of 1959.
I say most popular because the "Supergirl" idea had been used several times before Kara Zor-El showed up.
They didn't have e-mail back then, but the first appearance of Supergirl set off a huge letter writing campaign with thousands of letters coming in approving of her.
(Of course now they would just get snarky e-mails...blah blah blah)
But while I only think about Kara Zor-El as Supergirl, her history has become as messed up as many other heroines.
(Do they just do this to the females or do they screw up the guys origins this badly too?)
We've had Matrix, Matrix/Linda Danvers, Cir-El and now we are kinda back to Kara Zor-El.
Supergirl has shown up twice in real life.
Once in the 1984 Supergirl played by Helen Slater and more recently in Smallville played by Laura Vandervoort.

Witchblade
Witchblade really isn't a person, it's a sentient artifact that has been passed down by women for centuries.
Some of the more famous wearers of the Witchblade were Cleopatra, Anne Bonny, Joan of Arc and yes, Wonder Woman in the JLA/Witchblade cross-over.
The most famous wearer of the Witchblade (to me at least) was NYPD homicide detective Sara Pezzini.
Mainly because that was when I read the book, and she was the character in the TNT series "Witchblade".
And in the series, Sara was portrayed by Yancy Butler.

Batgirl
When you say Batgirl, you have to specify who you are talking about.
"Bat-Girl" Betty Kane that debuted in 1961 in Batman #139?
"Batgirl" Barbara Gordon that debuted in 1967 in Detective Comics #359 and is now Oracle?
"Batgirl" Cassandra Cain?
"Batgirl" Stephanie Brown?
Even Charlotte "Charlie" Gage-Radcliffe (Misfit) and Helena Bertinelli (Huntress) have worn the mantle for a time.
And there are still a few of us that cant hear the name Batgirl without thinking about Yvonne Craig.

Harley Quinn
Another relative newcomer but still wildly popular, Harley Quinn didn't first appear in a comic, but in Batman: The Animated Series in 1992.
Harley was voiced by Arleen Sorkin in Batman: The Animated Series.
She appeared in real life in the 2002 series Birds of Prey, played by Sherilyn Fenn in the unaired pilot and Mia Sara in the regular series.
And Harley was so popular, that she did make it into the official Batman canon, appearing in several popular series and comic books.

Fathom (Aspen)
Fathom was created by the late Michael Turner and first published by Top Cow Productions.
Although the book is titled Fathom, the main character is Aspen Matthews.
Basically Fathom is a sexy Aquaman, but that's really an over-simplification.
Expect to see and hear more about Fathom and Aspen Matthews, as the word is that Fathom will become a major motion picture with Megan Fox as Aspen.
Megan and water.
I predict millions in box office sales.

Power Girl
And last but not least, the more (ahem) mature version of Supergirl, Power Girl.
Kara Zor-L first appeared in All Star Comics # 58 in 1976.
Power Girl is the Earth-Two twin of Supergirl and the first cousin of Kal-L, who is the Superman of Earth-Two.
Like Superman, Power Girl was rocketed to Earth before the destruction of Krypton, but her rocket took longer to get here.
Power Girl is known for her "womanly physique" which has gone from buxom to heavily muscled as opposed to Supergirl's more slender build.
Power Girl's build has even been written into some of the stories as a gag, and at least once, as a weapon.

Kara is also a favorite of cosplayers.

'' Phoenix '' The Most Powerful Woman of Marvel 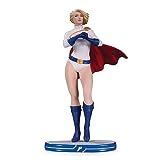 Poison Ivy is still leading the poll of The Top Ten Beautiful Women of Comics.
But just barely...Wonder Woman is right behind her.

Who is your favorite?