With an introduction by Prof. Ronald Hutton 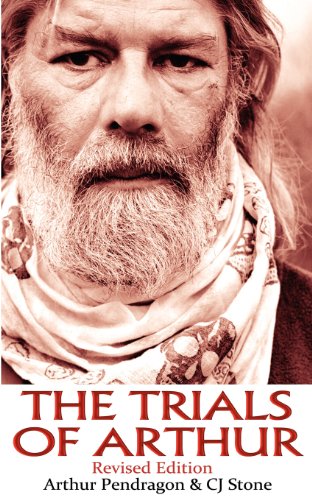 Meet Arthur - Warrior, leader and Druid. An ex-squaddie and biker turned spiritual leader and parliamentary candidate. The bearer of the Sword of Britain. Once voted the tenth most outrageous man in Britain by Loaded magazine, following the incident where he was naked in the Royal Courts of Justice. He is also - some would say - the legendary King Arthur, returned at last, fighting to revive the Wasteland and renew these islands. Don't believe him? Come with him on adventures and quests, through fields and forests and sacred places, to the mythical Britain behind the facade of our empty consumer culture. Regardless of whether you believe he is who he says he is, one thing is certain: he's the best Arthur we have.

'Am I alone in thrilling to this noble throwback to the age of Celtic romance? Our Prime Minister is a grinning charmless twerp; our Archbishop of Canterbury has a much spiritual charisma as a raw potato; and the House of Windsor is dullsville. I'd dump the whole pack of them tomorrow and replace them with a single Royal, Spiritual and Political leader - King Arthur.' AN Wilson, Evening Standard.

‘This is a book about heroism, patriotism, liberty, poetry, martyrdom, history, mythology, personal self-fashioning and other unforeseen consequences of enjoying cider, cigarettes and laughs with a bunch of mates. It is an epic true story of war and religion set in Britain during the Dark Ages at the end of the twentieth century, which manages to remain at once, like its main character, passionately serious, irresistibly compelling, and hilariously good-humoured.’ Professor Ronald Hutton, Bristol University.

‘The Trials of Arthur is the amazing story of one singular man. But it is also the inspiring tale of an unjustly maligned British counterculture. Searching, funny, intelligent and illuminating, it is on one level a rip-roaring read, whimsical and compelling, and on another a haunting elegy to all those people who refuse to accept that they cannot make a difference in a world they know must change.’ Deborah Orr, The Guardian.

‘In a nutshell: soap dodgers, druids, bikers... all manner of life romps through this funny and intelligent true-life tale. It gives a worm’s-eye view of the eco-protest movement.’ Spirit & Destiny.

‘The Trials of Arthur... is the compelling and often hilarious story of how an ex-soldier, ex-builder and always-biker donned a white frock (his words) and changed his name legally and regally to Arthur Pendragon. Trials? He’s had the odd run-in with Her Majesty’s police forces, mainly when protesting against new bypasses. One of the appendices lists 26 court appearances... So is this long-haired, bearded, cider-loving guy with a sword really Arthur Pendragon? His passport and driving license say so. In his passport photo he’s even wearing his crown. But is he really King Arthur? The co-author has his doubts. So, at times, does Arthur himself. And he’s perfectly happy for everyone else to think he’s a raving nutter. If people accept him as King Arthur, then he is King Arthur, king by acclaim, as it used to be. In any case, as the book says, if Geoffrey of Monmouth, Chretien de Troyes, Malory, Spencer and Tennyson can reinvent Arthur for their own purposes, spiritual or political, then so can we; he’s the King Arthur reinvented for today. 9/10. Great story of counter-culture King.’ Fortean Times.

‘The Trials of Arthur is filled with sagas, some hilarious, others sad and poignant, which show that this man is a human being on a mission to uphold “Truth, Honour and Justice”. The authors have been careful not to force their ideals upon the reader and encourage them to make up their own minds about Arthur and his deeds all the way through. However, they illustrate their beliefs in a humorous and dramatic way and, by the end of the book, the reader can’t help but like the man who calls himself King Arthur Uther Pendragon.’ Hampshire Chronicle.

‘For those of you not familiar with Arthur Pendragon, Druid King and Stonehenge defender, you’re in for a treat. Arthur’s story is one that is needed in these days when the people of Britain are being led into conflicts not of their choosing and are suffering at the hands of politicians and bureaucracy. Having faced racism and the worst that British society can offer, it is no small relief to find this patriotic upholder of all the good things about being British. Long live the once and present King! Highly recommended.’ Tania Ahsan, author of The brilliant book of calm.

‘The Trials of Arthur... is the partly ghosted autobiography of an ex-soldier and biker called John Rothwell who reinvented himself as “King Arthur” in the 1980s and became a leading eco-warrior. A larger-than-life eccentric character renowned for frequently being found “tired and emotional” in ditches, he has been in and out of court and jail in his role as a political campaigner against motorway construction and for public access to Stonehenge. If you still think that being a pagan in the 21st century means wearing dreadlocks, living in a tipi and having a mongrel on a string then you will probably enjoy these wacky adventures of a Peter Pan character wandering around in a retro-hippy Never-Never Land.’ The Cauldron.

'Most people within the UK Pagan/alternative movement will be familiar with the figure of the man who calls himself “King Arthur”. Most will remember him as the crazy guy who got arrested for wearing a sword, regularly found at Stonehenge or eco protests during the nineties. If you ever wondered who he really is, and how or why he came to claim to be Arthur then you should probably read this book. Co-written by Arthur and CJ Stone and told in the style of an epic tale of old it is an interesting and at times highly amusing read. Whether you agree that he is the once and future king, or not, you can’t fail to be impressed by a man who turned his life inside out to make a difference to the world, even though he knew he would be ridiculed for it.... So unbelievable, it might just be true.' Awen Clement. Kindred Spirit.

'An inspirational biographic account of a very interesting man and lifestyle, you will not want to put it down. I was actually sad when it ended! Great for anyone with an interest in paganism, particularly Druidism, Arthurian mythology, Stonehenge, protest, identity and meaning making.' Aimee

'Brilliant Book detailing the return of England's Ancient Leader, King Arthur in person, hearty and heartfelt account full of derring do and of down to earth Druidry, whether real or no, King Arthur has risen to meet the challenges before him with delight and good humor, recommended.' Celestial Elf

'A witty combination of poetry and polemic about Arthur Pendragon, self declared King of the Britons.' Fraser James

'It is hard to find such a real revelation of a book as beautifully written and informative as The Trials of Arthur, and not what was expected at all. There are interesting stories about the Druids, bikers, nature, tree protesters and lots of other stuff along the way in a style that is enjoyably lively. King Arthur is, of course, the star of the show and what a wonderfully determined character he is - you just want to keep reading and hear about the next Arthurian saga!' Touchstone

Read more from the Trials of Arthur