When she is satisfied that the butcher’s table is as fully prepared as can be, Alice bids Fiveways to stay, closes the galley door to enforce that command and climbs up the circular stairs to the bridge.

Joe is crouched on the floor at the back of the bridge, in front of an opened locker, busily sorting weapons in the dim light of a smuggler’s lantern. Alice can see the glint of steel as Joe lays aside a number of cutlasses, as well as the light sheen of well-polished and oiled gun grips and stocks.

The port wing door opens and the Admiral sticks her head through the gap. “Lights out!”

They rush out onto the bridge wing. The lights of Amsterdam are as far and indistinguishable as those of the other cities now. Alice notes that Noakes has changed course from north-west to west. The wind has shifted too for they still have a following wind despite the course change. Leeward is an expanse of darkness between two nests of sweeping searchlights and beyond that, Alice knows, the freedom offered them by the North Sea.

The mostly wind-powered zephyr is an impressive sight. Its captain has found a horizontal wind shear and set out all sails. The zephyr is larger and heavier than the Kestrel but because it’s designed for dynamic soaring, its current exploitation of a wind shear out of the Kestrel’s reach allows it to make more speed. Its bulk will soon overhaul Noakes’s winddrakar, albeit some 800 feet higher up.

The sight of the zephyr’s hull bearing down on them should have filled Alice with dread. Upon detection the foe would have the high-alt advantage and could rain fire and death on them. Instead of being fearful, however, Alice mixes apprehension with scorn. “Chuckleheads.”

“A nobby skirrer,” Noakes comments. “But he ain’t very good at the cloak and dagger business now, is he?”

Their collective disdain stems from the fact that the captain of the zephyr has not ordered a black-out. Instead, the aerocraft is lit up brightly; floodlights cast upon the decks and sails, every porthole aglow and the great wrought iron decorative lamps at the stern blazing the zephyr’s position across the dark miles of the night. Any lookouts on the zephyr ordered to keep an eye out for the Kestrel would have no chance of establishing night-vision. They would probably be incapable of seeing their quarry unless Noakes nudged their hull with his and the Kestrel’s crew started poking them with sharp sticks.

“I’ll wager a guinea that this daft bugger….,” Noakes indicates the zephyr. “Won’t be jemmy enough to order spells of cruising volume.”

Alice nods. Though the Kestrel might be as good as invisible to the zephyr, no one has invented a silent steam-engine yet. In thick fog, it was not unknown for noisy aerocraft to pass within a few dozen yards of each other, totally oblivious to the sound of the other craft’s engines which were simply drowned out by their own. Lighter aerocraft with sails could revert to cruising volume if their captains were confident in the stability of a wind shear. Their engines would be set at neutral as the aerocraft glided along a shear for a few minutes, still producing noise but sufficiently decreased to pick up any nearby engines chugging at full power.

Back in England, the Royal Aero Fleet excelled at the use of cruising volume, to the detriment of many a Free Trader. Like Noakes said though, a captain so unused to covert skirring that no black-out was ordered probably hadn’t the faintest.

“But there ain’t no point in taking an unnecessary risk,” Noakes says. “Everybody on the bridge please.”

Back in the bridge house Noakes tells them to select weapons, instructing Alice to pick up three cutlasses and a pistol for Seth.

“Moylan keeps her own pea-shooter aft,” he says as he lights the smuggler’s lantern Joe extinguished earlier, casting the light towards the deck so that there’s just enough of a dim glow for them to perceive each other.

Noakes chuckles at the sight of them. “Armed to the teeth, like proper Free Traders. I’m tempted to hoist the Jolly Roger. Call it a small miracle but I happen to have one.” He looks at Alice. “This is government business, ain’t it? We’re meant to be legitimate?”

Alice laughs. “The Minister would skin me alive if we hoisted the Union Jack over the skies of Holland. I have a better idea.”

She takes a rectangle of folded cloth out of her bag. Shaking it out she reveals the flag of the People’s Republic of Brighton; five stylised silver seagulls on a blue field, in imitation of the golden martlets of Sussex.

Noakes shakes his head. “Gorblimy! That Republic is out of business and I’ll swear any oath you’d care to name that the Admiralty and Aero Fleet will hang you quicker for Treason than they will for Piracy.” 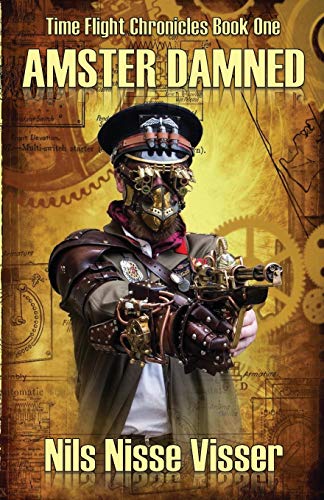 Merely This and Nothing More (Writerpunk Project Book 3)
Buy Now

For more work by photographer CORIN SPINKS, check out: