The Myths and Realities of the Headless Horsemen

Dean Traylor is a freelance writer and teacher. He wrote for IHPVA magazines and raced these vehicles with his father (who builds them).

Ichabod Crane was on horseback on a lonely road in the middle of the night when he heard the ominous hooves of a beast pounding the trail behind him. His heart raced as he perspired in the chilly night. He had been warned of strange and horrible things; now, that warning was becoming a reality.

To his horror he turned to find a devilish being charging at him on a death-black steed. The frightened school-teacher had to do a double-take as he and his horse galloped away. There was something horribly wrong about that rider. And to his dismay he discovered upon his second glance that his adversary had no head to speak of.

And thus, poor Ichabod was pursued by the legend of Sleepy Hollow, the headless horseman who was bent on cleaving the hapless rider’s head off to satisfy an unquenchable thirst for terror.

The demonic and decapitated ghoul on horseback is an iconic figure of American literature. The headless horseman has become a figment of the deepest and darkest fears of the unknown wilderness that once surrounded the young nation.

It’s also part of an international sub-genre in mythology and horror, in which headless evil spirits on horseback seek to terrorize anyone that crosses their path.

Throughout much of the United States and the world, stories of the headless horsemen permeate. Most are part of a literary tradition in Gothic Horror or folklore. Others are adaptations such as Tim Burton’s Sleepy Hollow. And, surprisingly, many of them have realities weaved into its narratives. In a sense, the headless horsemen in American lore and world mythology should be a no-brainer (no puns intended). They’re the stuff that frightened readers for centuries. Here are a few examples.

The most famous headless horseman comes from the imagination of Washington Irving, one of America’s first noted authors. In the short story “The Legend of Sleepy Hollow” the protagonist, Ichabod Crane, is chased by the apparition of a hessian officer who had lost his head (literally) after being struck by a cannonball during the Revolutionary War. The story was part of a collection of interconnected short stories about the Hudson River Valley of New York called The Sketch Book of Geoffrey Crayon (1819).

Hessians were German mercenaries hired by King George of Britain to fight the American Rebels. According to the story – as well as the legend the story spawned – the headless horseman, known as the Galloping Hessian -- was one of 51 Hessians killed in the battle for Chatterton Hill in the actual Battle of White Plains.

This particular battle would eventually become the precursor for the December 26, 1776 surprise attack on Hessian troops in the Battle of Trenton, which was led by General George Washington (and made famous by the iconic painting depicting the crossing the Delaware River).

The Tale of El Muerto

Another famous headless horseman tale is based in Texas. Thomas Mayne Reid’s 1865 “The Headless Horsemen” became a popular adventure novel in its time. The story was about the ghosts of beheaded horse thieves.

Reid’s story was based loosely on folklore. The folklore, it turns outs, may have been based on a supposed true account of Creed Taylor, a veteran of the Texas Revolution, Mexican-American War, and the Civil War who had a morbid way of sending a message to horse thieves.

Taylor’s “ghoul” was known as El Muerto. Unlike the Galloping Hessian, El Muerto was not a ghost. Instead, it was the headless body of a Mexican thief propped up on a horse as a warning to others. The image this must have created obviously caused a stir among those who saw it. Eventually, this heinous and disturbing scene would be passed down through oral tradition and become a legend.

Eventually, El Muerto would take on a demonic form similar to the Galloping Hessian. He too would become an evil spirit lurking the isolated trails in the southwest.

The stories emphasize rage and vengeance

Interestingly, the headless horseman myth may have its source in early British literature. The old English epic poem “The Green Knight” featured a demonic knight who could take off and reattach his head.

In the story, the Green Knight challenged people to kill him. His mode was to get the unsuspecting person to cut his head off. Seems easy; however, it was part of the knight’s trick. Once he reattached his head, he gave the person a chance to find a way – and the answer to a riddle – to kill him within a year…or be killed for failing to do so.

Some Interesting facts about the Green Knight

J.R.R. Tolkien, the creator of the Lord of the Rings series and The Hobbit translated Sir Gawain and the Green Knight. He considered the Green Knight to be one of the most complex character in literary history. And a quick look at his appearance in Arthurian legends lends some credence to this belief.

*Depending on the text, the Green Knight can be King Arthur's most trusted ally or his biggest adversary.

* Nobody knows the real identity of the writer of Sir Gawain and the Green Knight. He (or she) is referred to as the "Pearl Poet"

* Several movies, operas and plays have been created from this particular epic poem.

Hidden Meaning behind the Myths

The stories emphasize rage and vengeance. Irving’s Galloping Hessian stalked unsuspecting American travelers. It’s as if the Hessian was going after the Americans who were responsible for his demise (even if Ichabod was at least a generation or two removed from the Revolutionary War).

The Green Knight, on the other hand, appeared to be a character that used cunning skills and insidious games to challenge his victim. One could argue that knowledge and discovery (since the protagonist in this particular story, Sir Gawain -- the same one from the Arthurian legends of the Knight of the Round Table – went on a physical journey to find the source of a vital riddle) will defeat any evil.

El Muerto -- at least according to legend -- may have been used as a deterrent against horse thieves in the old west.

The Galloping Hessian and Taylor’s El Muerto have threads of reality weaved into their tales, as well. In fact, the town of Sleepy Hollow was based on an actual village called North Tarrytown (now known as Sleepy Hollow when the residence decided to change its name in 1996, in honor of Washington Irving).

Ultimately, the stories can be summed up as cautionary tales. They warned the readers against doing evil or to always heed warnings. Still, another obvious use for the story is simply to entertain and scare its audience, and to give them another entity to haunt their nightmares. 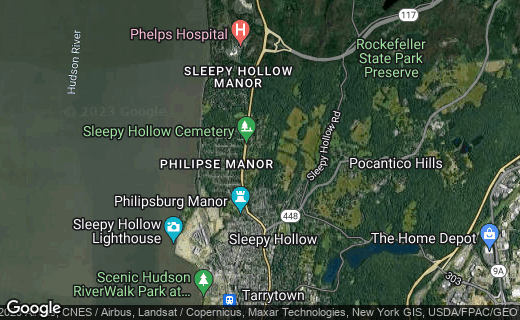