I tried reading Mann's first novel, Buddenbrooks , years ago. I could admire the style, but not the story, and, indeed, found the story so stultifying that I failed to finish it. For some reason, I can entire the world of Dickens, of Zola, of Dostoevsky, but not that of the family Buddenbrooks. As Thomas Mann is a much beloved author in his own country by those who are able to read him in the German, I must assume there is something I am missing in translation from that culture to this, or something lost in the language when translated.

I finished Blackstone's Commentaries and began burrowing into my unread trove to find something new to read. In doing so, I came across Death in Venice and other stories , translated by Jefferson S. Chase. I decided to give Mann another chance. Perhaps in a shorter form, I would be able to handle his love for detail and a tone that, in English, seems somber. So far, that is proven true.

Paul Thomas Mann was born in Lubeck, a Hanseatic city-state in Germany, to Thomas Johann Heinrich Mann, a wealthy import/export man, and Julia da Silva Bruhns, a woman of Brazilian descent, in 1875. His father died in 1892, and the family moved to Munich, where Thomas worked for as an insurance clerk while writing for the satiric weekly, Simplicissimus . He published his first novella at 19, his first novel, Buddenbrooks, in 1904 at the age of 29, The Magic Mountain in 1924, and received the Nobel Prize for Literature in 1929. He married into a wealthy Jewish family, and fled Germany with his wife in 1933. He reached the United States in 1938, becoming a citizen in 1944, participating in the war through the US State Department by delivering radio addresses and writing essays. He dealt with the Germany he had left in a 1947 novel, Doctor Faustus . In 1953 he returned to Europe, settling in Switzerland, where he died in 1955.

Thomas Mann draws on philosophical trends of his time in the creation of his stance towards life and writing, especially on Schopenhauer's theory of the will, which Mann sees as a force that is irrational and destructive, fundamentally opposed to the rational mind, and on Nietzsche's psychological insights and positing of the artist as an outsider to the society which he inhabits. Mann also draws on the phenomenology of Edmund Husserl in the attention he devotes to detailing observed states of mind, response, and emotion. In fact, it is this attention to providing detail that so marred my attempt to read Buddenbrooks .

The first story in Death in Venice and other stories is a strange one. "Tobias Mindernickel" begins in a dreary urban building housing a shop, a cabinet-maker, a midwife, a cobbler, a lady who sings at approaching footsteps, and Tobias Mindernickel, a man with no given occupation or relationships. He dresses in shabby, but carefully brushed, black clothing, walks with a cane, and is the object of the ridicule of the neighborhood children when he goes out for his walks. He has one object of beauty in his room, a dresser, and a flower pot in which nothing will grow. He sits on the sofa in his room, staring at the ground: "This would seem to be his sole purpose on earth" (3). He is a man, Mann writes, either beaten by life, or one born wholly unprepared for it, and "seems to lack the natural sovereignty of sensory perception that allows the individual to gaze out upon external phenomena" (2). He is inferior before the world: "his aimlessly wandering eyes can't help but grovel before man and thing" (2).

Mindernickel is a very strange and melancholy creature in this initial description of his manner and his life. Solitary and odd, he is the target of neighborhood abuse, cut off from society in his gloom and his ugly room, with its single ornament, a dresser in which he keeps his bread and knife. But it is his lack of sovereignty, of confidence, that is most telling, and which brings about the tragedy of his story.

One day, as Mindernickel is on his walk, one of the children who habitually torments him falls and is injured. Mindernickel responds with solicitude, as a man should to an injured child, but his solicitude contains happiness. He is happy that the child is injured, not out of vengeance, but because it provides him with the opportunity to be compassionate, to extend his aid, and as the one giving help, to be the sovereign of the moment. The child's injury, laying him low, below Mindernickel, makes him Mindernickel's subject, and provides him with a relationship in which he is in command.

Soon after, Mindernickel purchases a game dog pup, 4 months old, from a man in the park for 10 marks, quite an investment for one living in such confined, impoverished quarters. He names the pup 'Esau', for he thinks the dog capable of understanding such simple syllables. Esau is a being he can command, to which he is always superior, to whom he is sovereign. He engages in teaching the pup its name, and when the dog becomes tired and ceases attending to the lesson, Mindernickel thrashes him with his cane. This energetic, healthy puppy rarely goes out, though sometimes he escapes his confinement and plays with the children outside against Mindernickel's wishes, but is kept in the gloomy room, restrained, punished for moments of youthful exuberance.

Before we continue, let us discuss names. Tobias is drawn from the apocryphal Book of Tobit, in which Tobit, with the aid of the angel Raphael, angel of healing, drives a demon away from Sarah, a woman who then becomes Tobit's wife. Tobias Mindernickel has no Sarah, but he plays on three occasions, two of them successful, the role of Raphael. Esau is the elder child of Isaac, brother to Jacob, taken to represent the vital against the spiritual Jacob. Jacob who wrestled the angel, as Tobias fights a demon. These names, then, in a short burst of associations connects the dog owner, as both Tobit the conqueror of demons and Jacob the wrestler of angels, and the dog, Esau, who is subordinated to his younger brother, selling his birthright for porridge.

Tobias needs the dog, secures him to himself as a new, living possession. In training the pup he plays Napoleon reviewing his troops, performing in privacy the sure possession and rule he has of this one being in all the world. In this gloomy room, this gloomy relationship, an opportunity comes for Tobias to once again play Raphael. The dog, leaping for a piece of bread, accidentally runs into Tobias's bread knife. Again, in the face of suffering as an opportunity for sovereignty, for taking upon himself the role of healer upon whom the invalid is unavoidably subordinate, Tobias feels joy. As the dog recovers, Tobias's joy disappears, replaced by hate. Healthy, the dog escapes his command and reverts to his natural, healthy state, a state in which Tobias cannot, although he believes he should and he does try, completely rule him.

The tragedy occurs from the connection of the dog's injury, of the healer's rule of the invalid, to Tobias's happiness. What happened serendipitously with the child, accidentally with the dog, is repeated by an act of will. Tobias attempts to return the dog to the position of invalid by stabbing him, but it goes horribly wrong. He does not injure the dog, he kills him. In so doing, he eliminates his only companion, brother, friend.

Unfortunately, yes. Just as there exist invalid's who seek that state, there exist people who create invalids to care for, to have power over, or who take advantage of naturally occurring ill health in another to occupy a sovereign position. It is easy, from the outside, seeing only their good works, to misread their motives, and thus to miss their danger. What will such people do threatened with a patient's recovery?

Consider the women who harm others, primarily their children, in order to gain the attention and the compassion of the medical profession and the society around them. These women, sometimes said to be suffering from Munchausen by proxy syndrome, go to extraordinary lengths to ensure that their children continually require attention, medical treatment, and testing. It is an especially insidious form of child abuse whose outward conformity to 'caring' protects it from detection, and makes a hero/victim of the abuser. If a child is sick, we do not assume the parents to be the cause, nor should we. But the fact of Munchausen by proxy illustrates that darker motives may be at play where we observe only love from our vantage point.

From a full range of possible motives for actions, we tend to accept those we find most congenial, most gentle on the character of the species man. Thus, a man or woman who kills an ailing spouse, is often judged more gently than others, for we assume, and he/she claims, to have acted in accordance with the spouse's spoken, or unspoken, wishes. Less wholesome motives may have accompanied the merciful one, or the merciful motive may have occurred only after, as the act was rationalized and turned into a story for the killer and for society. Invalids, especially long-term invalids, are expensive, emotionally and fiscally. The strain of approaching death destroys living attachments: a death accepted, the wait for it becomes increasingly difficult for the survivor, the caretaker, who knows that further life awaits them once death's approach is complete. The survivor's life comes to hinge on the invalid's death.

Not that this series of less than virtuous considerations take place in all caregivers, or mar all relationships between an invalid and those who love him/her. But they are possible. They occur in some people, and thus are part of our human story, if not the part of the human story that makes us feel good about the species. Why we act the way we do, how we gain our desires, is a complex matter, and some of the motives that inform even our best actions may be less than virtuous, amoral or even immoral.

Mann returns again and again to the invalid as a social and individual creation. The next Mann story in queue is set in a sanitarium, then, in Europe primarily a facility for caring for those with tuberculosis and other physical conditions, although some included those with emotional problems as well. No dogs are murdered there. 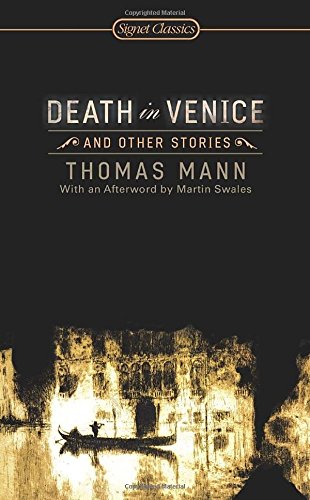 Death in Venice and Other Stories (Signet Classics)
Buy Now