To Let or Let Go

Dean Traylor is a freelance writer and teacher. He wrote for IHPVA magazines and raced these vehicles with his father (who builds them).

Dan Taylor checked the caller I.D. and was floored by the familiar – yet long dormant – number emblazoned on the phone.

Helen Steel - the love (and heartbreak) of his life -had broken her silence. The thrill shot through his head and down to his heart where it pounded like a jackhammer.

It had been a year since Dan entered his room to find a type-written “Dear John” letter on his bed. He remembered picking it up, reading it, and having more questions than answers about what had just happened. The letter fell from his trembling hands. The love of his life was gone.

Immediately, Dan snatched the phone, pressed redial, and put it to his ear.

Dan’s mind began to wander from that dark day in his bedroom to the weeks that followed when he locked himself in his apartment, crying, drinking and letting the duties in his life slip away.

Yet, as he waited to hear that voice that once intoxicated him years before, Dan’s mind began to wander from that dark day in his bedroom to the weeks that followed when he locked himself in his apartment, crying, drinking and letting the duties in his life slip away.

When he finally emerged, he had lost his job, lost contact with a few good friends, and was lonelier than ever. However, as his mind raced through the memories of that year since that fateful day, things got better; he found a new job, reconnected with his friends, and started to date, again.

Things got better the previous night. He went on a date with Annie Kay. And, suddenly, the loneliness of the past year was replaced by genuine hope.

“Hello?” trickled out the laconic voice of Helen.

Dan hung up. The voice didn’t set him on fire with passion, anymore. It didn’t have the same effect it had on him the previous year.

He realized at that moment he had to let her go rather than to let it happen again.

The realization led him to another direction. He picked up the phone again and dialed.

Suddenly, he felt the fire inside, again.

Letting go of a past relationship is never easy. Sometimes it takes days, weeks or years before one can finally cut the ties and move on. About ten years ago, I went through a dating spree. I thought I found "the one."

i went on several dates with this person, and it felt like it was going well. Then, out of the blue, the person stopped calling. Out of the blue, she sent a message stating: "I confused, I need some time." The situation is similar to Dan Taylor's.

Unlike Dan, I moved on, easily. There were no sobs, self-destruction, or drunk nights. Within months, I found my future wife. Life started getting better than before.

Nearly a year after this person's rejection, she called and left a message. She wanted to rekindle things. It took me a mere second after listening to the message that I wasn't going to reply. I deleted the message; thus, severing that precarious link. My love life was one a new path. There was no need to reopen an old relationship in this case.

In my younger days -- more than 20 years ago --i didn't have that strength. Another failed relationship took me a long time to recuperate. Again, she wanted space, I gave it to her, and we became friends within a week after the relationship was over. The friendship faltered. Eventually I had to cut that person out of my life for good -- well after the romance had been long dead. That situation had a profound effect on me. And, it made it easy to dump the failed one I had with the woman ten years ago. Simply put, I wasn't going to through that again.

As mentioned, break-ups are not easy. However, with a little experience and maturity, the lingering effects of the process will not linger as long. And, eventually, you have to move on and find a better situation. 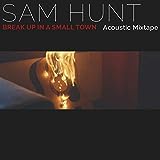 Break Up In A Small Town (Acoustic Mixtape)
Buy Now