Seldom has history seen a more quick, shattering, and decisive battle, than the sickle cut of the German army through the Allied, predominantly French, forces in 1940 that led to the catastrophic collapse of the Western Allies in Continental Europe. With lightning speed the German forces, led by fast moving, aggressive armored divisions, shattered French defensive lines and proceeded to encircle and largely destroy the French army, that great force which had just barely 20 years before emerged victorious against the Germans following four grim years of war. The sheer speed, the confusion, the dust, the blood, the complex and tangled lines of contact and the fog of war, makes it an extraordinarily difficult task to attempt to sum up clearly this piece of tragic theater which constituted a key stone of the story of the Second World War, France, Europe, and the world. And yet here, Alistair Holme, in To Lose a Battle: France 1940 somehow manages to do just that, with a brilliant pen which covers in both great detail key individual moments of the battle, ones seen from the perspective of the lowest soldiers to the highest generals and leaders, which details the events which led up to the last, great, final, clash between France and Germany, the armies, and places great attention to a trifecta of military, social, and political developments which influenced this climatic conflict. Although a book which has grown old, and with some sections which more recent research conflict with, it continues without doubt to be a critical and crucial book to understand how the disaster which gripped France in 1940 came about, and how it unfolded in all of its brilliant, dramatic, chaotic, drama.

I have always had a great degree of admiration for those history books, which in covering topics which might otherwise be relayed in dry and boring pages, manage nevertheless to tell a story with great panache, éclat, and élan. Without a doubt, To Lose a Battle is one of them, starting with the brilliant description of the Fête de la Victoire of 1919, culminating through chapters of headily brilliant details of military actions which brings disparate battlefields scattered across the hills of the Ardennes to the grassy plains of France to vivid light, its charged dramatic portrayals of the meetings of Allied political and military leaders, and its final ending scenes painting a picture of the aftermath of the Battle of France. Never does Horne miss a chance to examine, to see from a new angle, to write the extra line of brilliant description, to see anew an elegant allusion or metaphor. This is particularly well supported by the introduction of newspaper and order citations at the beginning of each battle, helping to give such a tremendous sense of the mentality at the time, or more precisely a sense of incredulity at the vast gap between reality and the world in which newspaper writers lived. Horne is far more than just a military writer, but rather a brilliant descriptive author who manages to create a stunning and impressive story.

Broadly speaking, To Lose a Battle is divided into two sections. The first is devoted on providing a run up to the Second World War, and examining the development of France and Germany with particular emphasis on the state of morale, military, and to some extent politics. The second, massive, part of the book by contrast deals with the actual operational and tactical nature of the German offensive into France, at Hannut, Sedan, the rush to the sea, Dunkirk, and other myriad battles. This is done with incredible detail, and examines the operations from all levels of the French and German military, brilliantly zooming in on commanders positions, to the political and high commands towards the rear with Hitler, Gamelin, Paul Reynaud, and Churchill, to individual soldiers on the front. One receives at the same time an excellent understanding of what is happening via operational details, and also vivid descriptions of tactical encounters.

The genius of the book lies in being able to take what was a highly chaotic event, and distill it down to an understandable narrative, while still managing to preserve the taste and the understanding of what these dreadful lightning days were like. In its portrayal of tactical operation after operation, when German tanks broke through already-shattered French divisions and roared into the French rear, or the desperate fighting by French mechanized units or occasional pockets of resistance against German forces, the grim faced meetings in Paris where under the smoke of burning records and the terror of a potential German offensive towards the city of lights, French cabinets and Churchill discussed the fate of the Allies. This constitutes the perfectly manipulated clay of the great sculpture which Alistair Horne has deployed to such effect, but interspersed with sufficient narrative and commentary from above to be able to understand what these elaborate movements of chess pieces meant in the wider contexts. As one reads, one truly feels that one has a sense for the confusion, panic, and helplessness which pervaded the French high command, and one takes to one's heart the realization of how impossible it was for the French to keep up with the fast moving battle and engage in counter-attack operations, more than simply receiving an intellectual lecture about the grave deficiencies in communication, initiative, and aggression.

So too, Horne prepares the movement up to the war in a brilliant and clearly deep understanding of French society, of its hopes, wishes, mentalities. This is a man who is acquainted with France well beyond simply the lines of its infantry divisions and military divisions, as his authoritative understandings of French cultural events and escapism makes clear, with clear and decisive references to what was happening in Germany on the other bank of the Rhine, and of course, a very sophisticated recounting of the strength, organization, and workings of the two respective armies.

One of Horne's favorite subjects, and one which is not repeated to great extent in some of the other books which I have read, is the focus on morale, the fifth column (enemy agents inside a country who are willing to betray it), and propaganda. While as for myself, I think that to some extent Holmes can overemphasize this part of the battle, it makes for fascinating reading and something which is neglected elsewhere. It can also be one which says some very dark things about France's history in times of crisis, as summary executions of perceived "traitors", including anti-fascist refugees fleeing from Hitler, can attest. For a look into the spirit and the ideas which coursed through the seemingly peaceful surface of France throughout the Phony War, and then burst into a mighty inferno during the vicious fighting during the Battle of France itself, this book in of itself makes an excellent one. The same can be said for looking at the equivalent in Germany: this book is truly a Franco-German story, part of Horne's trilogy upon the subject, and one which looks with sophisticated attention to both Paris and Berlin.

Nevertheless, there are at times certain failings which the book has, which are currently conflicted with. For an example which rests stuck in my mind, there exists that of the crucial Saar Offensive. This offensive, launched by the French army at the same time as Poland's desperate struggle in the east, supposedly would invade Germany from the West, taking away Germans from embattled Poland, is presented in the book as a great missed chance, one which if pursued, might have seen the French break through and send the fragile German army reeling. However, the book doesn't mention the mobilization times required to concentrate the heavy French assets for this, the numbers which it cites are compared to other sources rather optimistic for the French and pessimistic for the Germans, the negative status of air operations over the battle for the French, and the difficult geography. This is of course, only just a single example, but the book overall has a certain flavor about it which is more in tone with older works, which appears as something, having read follow on works, as lightly outdated or quaint: the comments about Hitler and focusing on his catastrophic decisions ignores some of the natural limitations in the German war machine, particularly the focus on Sealion - the German plan to invade England, but which while the author notes that the German lack of planning on it meant that it was impossible, he does not explain exactly how any sort of planning could have made the limited naval, air, and amphibious forces of Germany sufficient to invade England. Perhaps it is because the book is one which is the bedrock for all of the works which followed onto it, and constitutes to this day the decisive work about the Battle of France, but even still, the fact of its age, even if it may be beyond its power, lies against it. Other details emerge, such as the Divisions Léger Mécaniques, in fact highly powerful armored divisions, beyond characterized as glorified reconnaissance units - with only the slight qualification of this being rectified at the 11th hour being given in exchange. Plenty of times some examination of the organization of various units, or maybe some maps or charts, felt like they would be appropriate. Of course, space limitations may have been responsible for preventing this.

Despite this for a complete understanding of the Battle of France, written in a thoroughly beautiful and enticing way, which encompasses the reasons behind the collapse and its unfolding in meticulous detail, To Lose a Battle will always be a titan in this genre, and it is one which is more than well worth reading, digesting, and savoring. Other books will be useful, in their serried ranks: The Maginot Line: A Basic Primer, by J.E. Kaufmann to understand the construction of the great fortress line the French built, The Seeds of Disaster: The Development of French Army Doctrine 1919-1939 by Robert A. Doughty to see the precise tactical and operational developments in the French Army, French Foreign and Defense Policy 1918-1940: The Decline and Fall of a Great Power (written by multiple people) to understand the rather catastrophic diplomatic situation of France by the late 1930s, State Capitalism and Working-Class Radicalism in the French Aviation Industry by Herrick Chapman to understand how the French air force manifestly failed to be able to produce and equip enough aircraft to defend France in 1940, are all just a preliminary list of books which provide excellent context and addition. But if I was to choose just one of them to look at France in 1940, without a doubt, To Lose a Battle is the book which is the most insightful, polished, sophisticated, elegant, and useful, the bedrock upon which all the others rest.

4 stars for To Lose a Battle 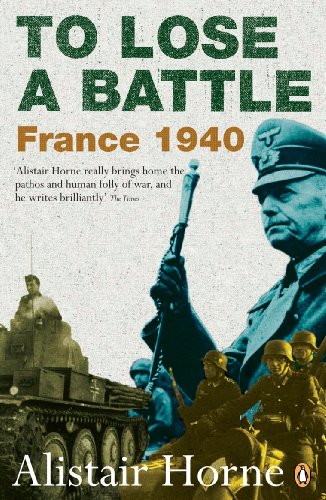