Some things are just easy to say, words flow of the tongue and come out of your mouth without you really having to think about it.

The trouble begins though when you try to speak fast you begin having to think faster and the words just won't come into your head fast enough leaving you stuttering a lot and reapeating a lot of the words over and over.

You can with practice train your brain to keep up with what you are saying though through the use of tongue twisters, tongue twisters are fun sentences or poems that usually contain difficult words or words that sound similar to each other. They try to they confuse your brain and trick you into saying them wrong.

Why is it that four simple words on their own are so easy to say but when you put them together in a sentence and try to say them fast you find it almost impossible.

Red Lorry Yellow Lorry is even difficult to say at normal speed, the best way to get your tongue around this one is to start of slow and speed up why don't you give it a try?

I always end up with a wed wolly rellow lolly.

Tongue Twisters are a great fun way to help develop your children's speech, playing games to see who can say them correctly and in the fastest time, when mistakes are made everyone has a good old laugh about it.

Peter Piper is a great poem to test your tongue and race against the clock with.

If Peter Piper picked a peck of pickled peppers, 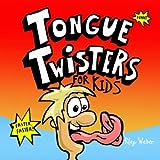 She Sells Sea Shells, By The Seashore

She sells sea shells, by the sea shore, try this one and see if you can avoid saying She Shells Shea sells by the shea sore.

Betty Botter Had Some Butter

Betty botter is one of the longer tongue twisters and this one can really tickle your tongue, give it a try, again start of slow and speed up for best results.

Betty Botter had some butter, But, she said, this butter's bitter.

If I bake this bitter butter, it would make my batter bitter.

But a bit of better butter-- that would make my batter better.

So she bought a bit of butter, better than her bitter butter,

and she baked it in her batter, and the batter was not bitter.

A few difficult one liners

These ones really get your tongue twisting and turning.

These thousand tricky tongue twisters trip thrillingly off the tongue.

The thirty-three thieves thought that they thrilled the throne throughout Thursday.

It's not the cough that carries you off, it's the coffin they carry you off in!

silly Simon's sitting in a shoe shine shop. Where he sits he shines, and where he shines he sits.

Again with the poop!

I really am a pleasant fellow.

OK I Promise no more poop.

I am the best mother pheasant plucker,

That ever plucked a mother pheasant!

Yes said about that one.

Some times people will try to foll you by trying to get you to say things fast that are not real tongue twisters, These ones are really just plays on words which end up making you say something rude.

Polish It Behind The Door

This doesn't even look like a tongue twister but if you say it fast enough you will soon realise what Polly actually did do behind the door.

I slit the sheet, the sheet I slit and on the slitted sheet I sit

Again I don't really want to know what happened on the slitted sheet.

Do you smell something?

Can You Say "Red Lorry Yellow Lorry" ten times in a row without messing it up?

Make A Tongue Twister With Your Name

Why not try something new and make up a tongue twister using your own name it can be quite difficult to find words to rhyme but challenging and lots of fun.

Here is one I made from my own name

Give it a try for yourself I am sure that you can do much better than I did.

Share your personal tongue twister in the comments box below.