Batman: Arkham Knight - PlayStation 4
"In the explosive finale to the Arkham series, Batman faces the ultimate threat against the city he is sworn to protect..." Price: $57.07 & FREE Shipping
Buy Now

Batman probably has the best villian characters that have faced any super hero: The Joker, Two-Face, Scarecrow, Harley Quinn ... All away from the cliché of delusional megalomaniac villain: they are people that hide terrible stories, tragic events that have led their minds to madness, and they've lived long enough to be turned into villains.

Batman is particularly known for having some of the best villains in the history of comics. From Two-face to Bane, and the ever-recurring Joker, the enemies of the Dark Knight are remarkable not only for its great variety, but also because of the dramatic background that "justifies" their horrible actions.

A genuine cast of maniacs who should remain locked up for life in Arkham asylum. Luckily for us (and unfortunately for the bat), Arkham guards are more inept than a stormtrooper, and thanks to that, these villains have given us amazing stories over the years and sometimes they even have stolen the limelight from batman.

Joe Chill is merely a third-rate thug. He is not strong nor particularly clever, but he deserves a spot on the list because without him, Bruce Wayne would never have become Batman. Yes, he murdered Martha and Thomas Wayne on leaving the theater.He somehow created Batman.

Sometimes a villain, sometimes an allied, sometimes the love interest of the Dark Knight. Catwoman is one of the recurring characters in the stories of Batman, and although her appearances usually announce the arrival of problems, she usually ends up helping the hero one way or another.

Born with reptilian traits. He was raised by his alcoholic aunt who abused him and bullied him because of his hideous appearance and brutal behavior. Croc ended up killing his aunt and then became a violent criminal.

Penguin is not characterized by hatred of any kind, nor flashy suits or modus operandi. It's just a mastermind of crime, pulling the strings of several criminal groups (including some that are considered "above" him), to achieve his goals. It is a "sane" man, that beyond affinities or common goals, is always looking for his own benefit, even if it means working with Batman or deliver data on criminal peers.

A female who usually makes things very complicated to Batman is the villain known as Poison Ivy, she does not feel any remorse in doing whatever it takes to get her ecological purposes demonstrating an exorbitant love for plants, coming to prefer them rather than people. This is due to her status as half human and half plant, which also takes aim at the destruction of the human race to be replaced by a world where plants dominate.

Edward Nashton suffered constant abuse from his parents, who ignored him when he questions about the very nature of things, that fact began to haunt him and He swore that someday he will possess all knowledge about everything.

Edward grew up studying and creating his own puzzles, someday he He participated in a local fair where he won several hundred dollars by cheating to other participants. He also changed its name to Edward Nigma, which would take as his stage name.

Edward became a big name when he assaulted the Bank of the City with his new helpers, Interrogation and Eco; Nigma wore a suit adorned with question marks and became The Riddler, a wily criminal who always sent to the police courts tracks of his upcoming activities in the form of riddles and puzzles. 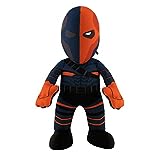 Although originally was not conceived as a villain in Batman, with the pass of time Deathstroke has earned to be one of the fiercest opponents of the Dark Knight. Besides being an expert in the art of war, he was genetically enhanced to increase his strength and speed to superhuman limits, something that Batman got training base. 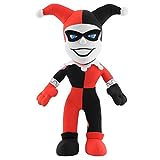 Batman the animated series is one of the best animated series ever. And proof of this is that many of the most iconic villains were born in their chapters, such as the Clown Prince girlfriend, Harley Quinn. Dr. Harleen Quinzel was commissioned to treat the Joker when he was admitted to the psychiatric Arkham, instead she fell unsteadily in love with him and his killer jokes.

Although the Scarecrow became more famous thanks to the new trilogy of Batman Begins, the character is older than it looks . His first appearance was in the fall of 1941 to World 's Finest Comics # 3 to then become part of the stories of Batman. The most interesting of this villain is the use of fear as a weapon , which also imitates Batman to some extent. Jonathan Crane , a psychology professor and researcher of panic and fear, inducing drugs used to attack their victims , ironically , his worst nightmare is Batman.

The interesting thing about Harvey Dent is the duality , the two poles that we all have inside, the dichotomy between good and evil. The element of the coin is not lesser , it means in fact the play of chance and opportunity as fundamental and decisive in the tension between both sides . It seems that he would like to say that we live prisoners of entropy and therefore our actions have no rational grounds , but rather pure chance.

If any of the opponents of Batman matches his perseverance and ability to overcome himself , that's Bane. Example of willingness to sacrifice without limits, this character never hesitates to take the most inhuman of challenges when it comes to improve to be the best.

These virtues would make him a hero if not combined with an uncontrollable hatred of the world that surrounds him, a world that condemned him before birth. A world that never granted him the right to be innocencent and that for him, is nothing but a giant prison to conquer. 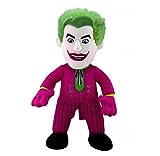 The Joker most be on this list, no doubt. The most iconic villain from all batman series. The evolution of the Joker has varied according to the time: in the 40's began as an eccentric joker and rather harmless to become a schizophrenic psychopath.

The Joker has been responsible for many tragedies in Batman's life: it is believed that he was indirectly responsible for the murder of his parents, he paralyzed Barbara Gordon (Bat Girl) and killed Jason Todd, the second Robin. Still, he does not have the intention of murdering Batman, as he becomes the motivation of his existence, and at the same time, Batman can not kill the Joker because he hates criminals and doesn't want to step on their level. characters intended to face against each other until the end of time.

Did I Missed Any Important Villain in This List? Name it!