Germany and Japan have long been linked together in popular culture, focusing on their mutual role in the Second World War, and in intellectual culture there has been similarly intense focus upon the relationship between the two. Courses on Japanese history will note the way in which Meiji Japan copied Imperial Germany's state institutional set up in modelling their constitution after that of Germany, and the fact that the Germans did much to influence the Japanese army is well known. Thus it can seem to present fertile ground for discussion, leading to the book Transnational Encounters between Germany and Japan: Perceptions of Partnership in the 19th and 20th Centuries, a collection of essays upon the subject. This book notes that there has been previously scholarly work upon the matter, but not that which has covered the second half of the 20th century, offering new ground for analysis and coverage.

Chapter 1, "The Myth of a 'Familiar Germany': German-Japanese Relations in the Meiji Period Examined" downplays the cultural connections between Germany and Japan, and diplomatic stress between Imperial Germany and Japan.Where there were important cultural links, such as in German music, it was most often transmitted to Japan through the Anglo-Saxon nations and their institutions.

Chapter 2, "Karl von Eisendecher and Japan: Transnational Encounters and he Diplomacy of Imperialism" discusses the role of Karl von Eisendecher, particular among German representatives in Japan in his genuine interest in Japanese culture. Despite several mishaps he ultimately proved to be a key figure on the German side in helping to move towards accepting Japanese revision of unequal treaties with Germany, although he himself was little away of his own influence.

Chapter 3, " Count Hermann Keyserling’s: View of Japan A Nation of Consummate Imitators" repeats a common theme about Japan, as a nation of imitators, by a rather cosmopolitan German conservative Hermann Keyserling, travelling the world in the search of an alternative to materialistic modernity. This brought him to be disappointed with the transformations in Japan, which to his mind brought many of the ills he thought were consuming the West to the country, the Japanese to him being excellent imitators who adopted the West's development. The Japanese as a whole were cast as excellent imitators, but less capable of actual innovation.

Chapter 4, "Western Criticism of an Occidental East: A German View of the Modernization of Japanese Literature, 1900–1945" takes a look at the cultural development of Japan as perceived by the Germans, where the Germans read into Japanese cultural developments as representing the abandonment of old Chinese models and the vitalization of their own cultural genius, showing them as a culture-creating people like themselves.

Chapter 5 "When Jiu-Jitsu was German: Japanese Martial Arts in German SPORT and KÖRPERKULTUR 1905–1933" is personally my favorite chapter in the book, examining the German reception of Japanese martial arts in the form of Jiu-Jitsu. This not only turned conventional depictions of European virility and strength advantages on its head with Asian martial superiority, sparking insecurities and anxieties, but was vigorously adopted by the Germans, portrayed as a natural extension of the traditional ancestral fighting styles of the Germans, without the corruption of the present's codes. This helped to enable Jiu-Jitsu to be assimilated into German sporting culture and ultimately adopted as being authentically German, showing a fascinating depiction of cultural adoption and German perceptions of Japanese culture.

Chapter 6, " Anna and Siegfried Berliner: Two Academic Bridge Builders between Germany and Japan" looks at the Berliner couple, two German academics in Japan who represented the ups and downs of the German relation with Japan, both being talented academics working in Japan but Siegfried being detained as a POW in WW1 and both later being oppressed by the Nazis. They still retained their ties and interests in Japan for the rest of their lives.

Chapter 7"The German East Asiatic Society (OAG) during the Nazi Era" examines the creation and development of the German scientific-cultural-ethnography society founded in East Asia, the East Asiatic Society, starting with its beginnings and Japanese involvement. It then discussed the expansion of the society, and then above all else during the Nazi era how it was taken over by the Nazi party (with the compliance of the OAG) and what the effects and results of this were.

Chapter 8 "Japanese Ambivalence toward Jewish Exiles in Japan" alights upon the strange world of Jews fleeing to Japan in WW2. The Japanese occupied substantial zones with Jewish refugees, such as Shanghai, and were convinced that the Jews had substantial power in the West. This led to proposals to treat them favorably or even establish Jewish states to procure their support. After Pearl Harbor and fully aligned with Germany however, Japan became more hostile to the Jews, routing them to ghettoization in Shanghai, although they fundamentally were pragmatic and not driven by the same deep antisemitism found in Germany.

Chapter 9, "The Nuremberg and Tokyo IMT Trials: A Comparative Analysis" sets out to explain first the origins of the post-war war crimes trials, and then the differences between the Nuremberg and Tokyo trials and what some of the problems which plagued the IMT (the trials in Japan of Japanese war criminals) trials and undermined their legitimacy were., as well as some of the actual events and arguments.

These war criminals of course existed outside of the trials, as Chapter 10, "A “Penologic Program” for Japanese and German War Criminals, 1945–1958" studies with its look at war criminals in the post-war era, examining how they were treated in Germany and Japan and then moving into the differences of their management. In Germany war criminals quickly became an issue where the German government was actively involved in trying to secure their release and it was a politicized battle, while in Japan the Japanese government had to carry out Allied directives concerning war criminals, and learned that its best policy was to lie low and pick other battles, setting up for the present day's alternative treatment of war criminals - even if in Germany, war crimes trials are used by the government to serve justice to war criminals, instead of to exonerate them as previously.

Chapter 11, "Restoring German-Japanese Relations after World War II" is devoted to picking up ties after WW2, especially in economic and cultural areas. Economically ties were limited but promising, while in the cultural sphere the Germans used the previously mentioned German East Asia Society to attempt to improve their cultural image, ironically continuing a Nazi-era development. Although neither Germany or Japan were ever particularly crucial to each other, they both had cordial relations with similar policy objectives towards the other.

Chapter 12, "Peace, Business, and Classical Culture: The Relationship between the German Democratic Republic and Japan" is one of my favorite chapters in the book, discussing Japan's rapport with East Germany. Here, politically both were relatively un-engaged, despite limited contacts between Japanese leftists and their German counterparts, but there were attempts to foster trade and commerce between the two - something which stumbled on various structural problems. The most interesting part however, was the cultural relationship between the two, where the respect accorded by the Japanese to German classical culture resulted in GDR efforts to promote its own cultural activities being assimilated into a greater German tradition, and thus undermining its own separation and unique identity vis-a-vis the Federal Republic of Germany.

The final chapter, chapter 13, is "Transnational Communicability: German-Japanese Literature by Yoko Tawada"discusses the nature of the writing of Yoko Tawada, German-Japanese writer, and the problem of translation of her works and inter-cultural communication.

3 stars for Transnational Encounters between Germany and Japan

Many times the articles seem to refrain from drawing broader relevance and conclusions from their writing. Again and again one is confronted by articles which note the presence of some sort of link, but stress that it was a limited and small one. It is thus perhaps fitting that the very first chapter of the book, "The Myth of a 'Familiar' Germany", notes that Germany had much less impact upon Japan than many commonly write, and that which did exist was transmitted through the Anglo-Saxon world, rather than directly to Japan. It is a book which thrives on these sort of things, showcasing a limited relationship which belies its title.

Other chapters meanwhile show similarities, but not necessarily relationships and encounters, as can be observed with regards to war crime trials.Here, the Germans and Japanese underwent a similar experience of seeing their former soldiers and politicians of the war era pursued in court, and there is some comparison between them for why the Japanese event has proved so dramatically different - Japan after all, is broadly speaking unrepentant about its war time acts, while Germany goes to great length about its own war crimes. But this is something which is a coincidence and a similarity, rather than a relationship and partnership.

For a subject which the book insists was a highly promising one, where there were tight links and an important relationship between Germany and Japan, it instead seems to be one which comes out as rather threadbare: a relationship where the German government and metropolitan German society often ignored and cared little for the actions of its officials in Japan, that a relationship could be defined as simply undergoing a common historical event as with the Japanese and German war crimes trials, limited economic and political ties, and that the Japanese often more admired the British than the Germans as foundations for their desired state. This is more a book of coincidences between the two, than a real partnership.

This is not to say that there are not articles which I find interesting, and I particularly enjoyed that which discussed relationships between East Germany and Japan, which does much to show a doubtless otherwise little studied subject, that of the GDR attempting to demonstrate their independence abroad through cultural diplomacy, and the cultural division of spoils within Germany in East Germany and West Germany. Most of German classical music culture fell into the GDR's territory, which ironically impacted adversely its attempts to asset its separation from the FRG due to assimilating it into the same German tradition.

I also deeply enjoyed "When Jiu-Jitsu was German", which to me is an excellent example of transnational cultural studies done well, showing the way in which Jiu-Jitsu was assimilated into a sports scene in Germany that viewed it as being positively, well German, and how it fit into broader conceptions of East vs West, concern and interest of the rise of Japan, German cultural nationalism, romanticism, and the changing face of German society and the need to bolster its virility and strength in key aspects.

It is the excellence of key articles like this which stand out in a work which otherwise, I find mediocre. Most are limited in scope, shallow, and don't spark any great discoveries, interests, or enthusiasm. It is a book which is about equal to the sum of its parts, and scattered and disparate parts at that, riven with a few jewels. 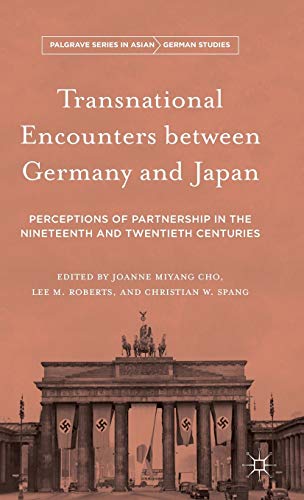 Transnational Encounters between Germany and Japan: Perceptions of Partnership in the Nineteenth and Twentieth Centuries (Palgrave Series in Asian German Studies)
Buy Now