A Sea Story from Joseph Conrad

Also known as Victory: an island tale, Joseph Conrad's book of love and peril was first published in 1915 and has lost none of it's appeal. Drawing heavily from William Shakespeare's play, The Tempest, this engaging story has been translated into film many times including a 1995 adaptation starring the magnificent talents of Willem Dafoe. Called uneven by some and a brilliant masterpiece by others, I found this book to be extremely modern and cinematic in that I could literally see every paragraph as a scene in a movie. Read this book and if you can't see Peter Lorre as one of the villains then I'll give up scotch (for at least 6 grueling minutes).

The Plot of Victory by Joseph Conrad

Axel Heyst is a bit of an odd duck, to say the least, so when he rescues a much maligned girl from the mean, pinching fingers of a musical troupe and the lecherous paws of a shopkeeper, no one should have been surprised. When he liberated the young beauty, Lena, to his island home, most would have thought that was the end of the matter. But jealousy and revenge, magnificent pillars upon which to build epic stories, set the forces of greedy cut-throats on their trail with promises of hidden riches and untold wealth. Fired up with hate-filled lies ringing in their ears, the three desperadoes arrive on Axel Heyst's island, determined to do whatever it takes to make him give up his gold. Unfortunately, there is no gold to be given up, a circumstance that will surely not please these torturers of men.

Give Victory As A Gift 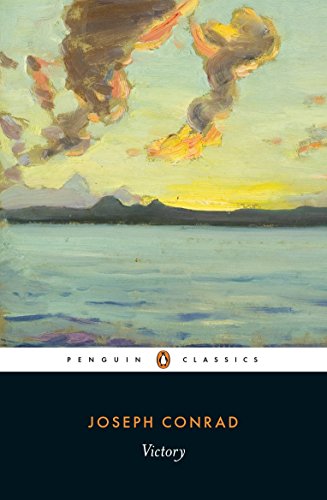 Victory: An Island Tale (Penguin Classics)
Axel Heyst, a dreamer and a restless drifter, believes he can avoid suffering by cutting himself off from others. Then he becomes involved in the operation of a coal company on a remote island in the Malay Archipelago, and when it fails he turns his back on humanity once more. But his life alters when he rescues a young English girl, Lena, from Zangiacomo's Ladies' Orchestra and the evil innkeeper Schomberg, taking her to his island retreat. The affair between Heyst and Lena begins with her release, but the relationship shifts as Lena struggles to save Heyst from detachment and isolation. Featuring arguably the most interesting hero created by Conrad, Victory is both a compelling tale of adventure and a perceptive study of the power of love.
Buy Now

According to a 2005 review in the much respected Washington Post, Joseph Conrad's book, Victory, is a tale of 'good vs evil, innocence and malignity'. I can't say that I agree with that because doesn't it depend on who's side you're on? I bet than not a single one of the characters in the book considered themselves as evil. The overly simplistic, default position of black hats versus white hats is a little unsophisticated for anyone over the age of thirteen I think. That's not to say that the reviewer is wrong, by any means, only that I am suggesting that there is much more depth to this story than that.

An interesting point that this particular reviewer does make is that, while some of Conrad's work like Heart of Darkness and Lord Jim score impressive numbers at Amazon.com, so do Cliff Notes guides to these and others among Conrad's books, strongly suggesting that the majority of these readers are students. I say that is interesting because the assertion that Victory is primarily a love story or a tale of good vs evil reads like a cliff note. This book is much, much more.

Great story tellers know a simple truth that great villains make great stories and Joseph Conrad's Victory has some of the best villains in any tale. These three monsters, will simultaneously scare and intrigue you.

Firstly there is Pedro, the almost neanderthal like brute who seems almost indestructible and obeys his master's every command without thought. A lesser writer would have used this common archetypal character as a device but not Conrad, he shows his brilliance by making even this sub-human thug interesting. Why would a goon like Pedro willingly and unfailingly obey the commands of the men who murdered his brother?

Second in the dastardly trio is Martin Ricardo, perhaps the most interesting character in the book. This terrifying man reminds me of the psychopathic killer, Hannibal Lecter, in The Silence of the Lambs film. He is a different kind of being, one that most people would certainly label as evil but one that really deserves more attention and consideration. Ricardo is not insane, in fact he is quite rational and intelligent. He reminds me of an interview I saw with Dustin Hoffman when he talks about interviewing criminals as part of his research for his 1978 movie Straight Time. He said that one of the criminals told him that the very first thing he thought whenever he met someone new was "Do they have anything that I want?" He would then take a mental inventory of their goods such as their watch or their shoes and then decide if it was something he desired. If it was then his second thought would be "What can I use as a weapon to help me take that away from them?" That is the essence of Ricardo Martin.

And finally there is Mr. Jones, the leader of this gang of bandits. A refined gentleman who's total indifference to human suffering is unsettling and yet, that is not the most unsettling thing about him. It's his abstract and absolute fear of women. His irrational terror is chilling because it causes the cold-blooded killer to become hysterical and there are few things more frightening than a hysterical murderer.

Falk : A Reminiscence
Falk : A Reminiscence is presented here in a high quality paperback edition. This popular classic work by Joseph Conrad is in the English language, and may not include graphics or images from the original edition. If you enjoy the works of Joseph Conrad then we highly recommend this publication for your book collection.
Buy Now

The shameless gossip Schomberg and his "idiot" wife with the one, blue tooth also appear in this book as they did in Falk, another of Conrad's excellent books. Clearly these characters were based on real life people that Jospeh Conrad knew, in fact he even says so in the introduction to one of his books (memory fails me as to which book). The fact that these people, who are so central to the story, are real, will give you a little chill as you wonder just how much of the story is true or at least based on actual events. The Schomberg in Victory is a far more sinister character to the clownish buffoon he appears as in Falk and yet many of his qualities and circumstances remains the same.

Beyond Good and Evil
Beyond Good and Evil: Prelude to a Philosophy of the Future is a book by philosopher Friedrich Nietzsche, first published in 1886. It draws on and expands the ideas of his previous work, Thus Spoke Zarathustra, but with a more critical and polemical approach. In Beyond Good and Evil, Nietzsche accuses past philosophers of lacking critical sense and blindly accepting dogmatic premises in their consideration of morality. Specifically, he accuses them of founding grand metaphysical systems upon the faith that the good man is the opposite of the evil man, rather than just a different expression of the same basic impulses that find more direct expression in the evil man. The work moves into the realm "beyond good and evil" in the sense of leaving behind the traditional morality which Nietzsche subjects to a destructive critique in favor of what he regards as an affirmative approach that fearlessly confronts the perspectival nature of knowledge and the perilous condition of the modern individual.
Buy Now

A Review of victory by Joseph Conrad

Since I have said that the simple judgement of Victory, An Island Tale as being about good vs evil is too simplistic then it is only fair that I give my own opinion as to it's themes and messages. To me, Conrad seems to be professing that to care too much for others, to be too kind, is a fatal flaw that opens the trap door to disaster. His belief appears to be that only the self-serving, the truly mercenary can be strong. Caring for anyone but yourself is a weakness, a self-destructive trait that would ensure the extermination of the race. His theme is almost Nietzschian that the superior men abide by their own laws and the rest, the sheep, get slaughtered.

This might sound a little harsh or even outlandish, after all, there is a solid love story here, but let us examine what actually happens. Alfred Hitchcock would call the love affair between Heyst and Lena the McGuffin, the excuse that drives the plot forward. But is it really? If the villains were not greedy, if Schomberg were not jealous, then the love story would only be a few paragraphs long: Heyst took Lena to his island where they lived happily ever after, the end. Not exactly best seller material. So let's take another look at Victory by Joseph Conrad.

SPOILERS For Victory By Joseph Conrad

Is Joseph Conrad's moral in his book Victory, An Island Tale a dark and depressing damnation of being good to others? Let's examine the facts. Heyst is a happy-go-lucky fellow without a care in the world until...he cares for Lena. It is his liberation of Lena from Schomberg's sweaty mitts that causes the shopkeepers jealousy and, in turn, causes him to set the villains upon Heyst and Lena with tales of hidden treasure. When Heyst only had himself to care about, he was happy and living in peace without danger.

Lena herself was, although not happy, healthy and safe when she was with the musical troupe. It was only after she fell in love with Heyst and began caring about him that her life came into peril.

Even the Villain Ricardo Martin and his companions are perfectly safe until Ricardo begins to care for Lena. After he becomes enamored with Lena, destruction!

One can't help but think about Joseph Conrad's other work, One Day More and draw similar comparisons.

Good vs Evil or Selfish Is Strong?