What Readers of Wide Sargasso Sea Should Know About Jane Eyre

The character of Antoinette in Jean Rhys' Wide Sargasso Sea is based on Bertha Mason in Charlotte Bronte's Jane Eyre. While readers of Wide Sargasso Sea need not have read Bronte's classic to enjoy the novel, a bit of background knowledge on Jane Eyre can be useful in fully understanding and appreciating the context and themes at work in Wide Sargasso Sea.

Rhys wrote Wide Sargasso Sea as a way of reinventing Bronte's classic novel. While Rhy's version stems from the Bronte version, it is a completely different tale. Infused with the beauty, magic, and subtle danger of the Caribbean, and crafted with Rhy's curiously refined writing style, Wide Sargasso Sea is a masterpiece in its own right. Though Rhys left the islands as a teenager, the novel inspired by her original home is now included in many major studies of Caribbean writing.

In a nutshell, Jane Eyre is the rags-to-riches story of the title character. Jane grows up an orphan, eventually finding a job as a governess under the employ of Mr. Rochester at a large and isolated manor house, Thornfield Hall. Many strange events take place within the house, which are blamed on a servant, Grace Poole. Rochester and Jane fall in love, and plan to marry.

At the wedding, a man named Mr. Mason comes forward to object. He claims that Rochester is already married to sister, one Bertha Mason. Rochester admits this fact, but explains that Bertha is mad, and has been living in the attic, unbeknown to the world.

Jane is upset at this revelation, and runs away from Thornfield. In her absence, the house burns to the ground, presumably at the hands of the lunatic Bertha Mason, who perishes in the fire. Jane is eventually reunited with Rochester, who has been horribly disfigured by the fire. As Rochester is now a widow, the two can finally legally wed.

Bertha Mason makes few physical appearances in Jane Eyre. Largely confined to the attic of the estate, we get to know her character only through the tidbits of information that Jane is able to glean about her.

Soon after Jane arrives at Thornfield, she comes to suspect that there is someone or something at large in the house. There are strange noises, odd laughter and screams. At first thinking that the house is haunted, Jane is later told that the culprit is one of the servants, a certain Grace Poole. One night a small fire breaks out in Rochester's room. Rochester blames it on his own carelessness, but Jane suspects otherwise.

At another point, again in the middle of the night, a guest to the hall by the name of Mr. Mason is stabbed. Rochester this time blames Grace, and enlists Jane's help in covering up the event. Jane is suspicious, finding it difficult to reconcile these fantastic sounds and violent events with the plain figure of Grace Poole. Says Jane:

What crime was this, that lived incarnate in this sequestered mansion, and could neither be expelled nor subdued by the owner? - What mystery, that broke out, now in fire and now in blood, at the deadest hours of night? What creature was it, that masked in an ordinary woman's face and shape, uttered the voice, now of a mocking demon, and anon of a carrion-seeking bird?

When Jane and Rochester get engaged, Rochester gives her an expensive wedding veil. The night before the wedding, Jane wakes up to sees a horrid figure with "a swollen purple face" tearing her veil. Jane thinks that she is having a bad dream, but in the morning the veil is in shreds.

At the wedding, Mr. Mason reappears to contest the marriage. He tells the assembled group that Rochester is already married to his sister, Bertha Antoinetta Mason, and thus cannot legally marry Jane. Rochester admits that he is indeed married, and makes an appeal to the sympathies of the crowd by explaining that his wife is an uncurable lunatic, thus his attempt to marry again. Says Rochester:

Bertha Mason is mad; and she came of a mad family; -idiots and maniacs through three generations! Her mother, the Creole, was both a mad-woman and a drunkard! -as I found out after I had wed the daughter: for they were silent on family secrets before. Bertha, like a dutiful child, copied her parent in both points.

Rochester invites the wedding party back to Thornfield Hall to see what kind person his wife is, and why he tried to keep her existence a secret. When the group reaches the attic where Rochester has been keeping Bertha, the scene is a horrific one:

In the deep shade, at the further end of the room, a figure ran backwards and forwards. What it was, whether beast or human being one could not, at first sight, tell: it groveled, seemingly, on all fours; it snatched and growled like some strange wild animal: but it was covered with clothing; and a quantity of dark, grizzled hair, wild as a mane, hid its head and face.

The maniac bellowed: she parted her shaggy locks from her visage, and gazed wildly at her visitors. I recognized well that purple face - those bloated features.

Bertha is indeed the one that has destroyed the veil, in addition to causing the strange noises, setting fire to Rochester's bedchamber, and stabbing Mason.

This is all we know of Bertha. A Creole woman, with long dark hair, descended of a mad mother. Rochester claims that he was tricked into marrying her for a considerable dowry, only finding out about her family secrets after the wedding. It was this scant information that so piqued the interest of Jean Rhys, and caused her to create the spellbinding backstory of madness and lust that precipitated Bertha's incarceration at Thornfield. While the Antoinette of Wide Sargasso Sea is a far cry removed from Bronte's lunatic Bertha, it is helpful to understand the context of the original character and story that spurred Rhy's lyrical and haunting novel.

More on Bertha and Antionette... 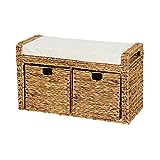