What is a Geek? What is the Opposite of Geek?

Recently I shared a picture of a flower, Parnassia grandifolia, on Facebook. Although I had not taken the picture, the flower was very unique and beautiful; and I wanted to share it with friends and family. One commenter even described it as being stunningly beautiful. After looking at this beauty, I’m sure you agree with their description. But you might be asking yourself, what does a picture of a flower have to do with the word “geek”?

I am getting there. Please bear with me.

The comments on the flower post lead to a very interesting discussion.

One of my friends stated, “Why does it remind me of the circuitry in a computer chip? Or am I just that much of a geek? It is beautiful.” Actually I agreed with her; I had thought the very same thing … and yes it is a geeky thought. But, oh well.

Another friend asked, “What is the opposite of geek, cause I'm not very tech savvy at all.”

That is the point that had me. What is the opposite of geek?

The Opposite of Geek

Hmmm … I thought to myself. What is the opposite of geek? I could not come up with a ready answer.

I had to stop and think about what the meaning of geek was first to see if I knew the answer. And still I struggled to find a word that pleasantly described someone who was not a geek.

Although I knew I was a geek, and I must admit that the term does not bother me, I also knew that many who did not consider themselves to be geeks used the term in a derogatory fashion to describe those of us who were.

So with that in mind, I decided the opposite of geek would have to be a positive term. I was mistaken. When I did a google search on the “opposite of geek”, I was surprised at what I discovered. At antonymsfor.com, it listed the words that are considered to define the opposite of geek. Some of the more derogatory words used to describe a “non-geek” were: slacker, dummy, half-wit, moron, underachiever, dunce, dope, imbecile, simpleton, dolt, or blockhead. Some of the less insulting words were: dabbler, novice, nonexpert, amateur, layman, or apprentice.

I was really beginning to appreciate the fact that I was a geek.

A fun gift for your favorite geek chef! 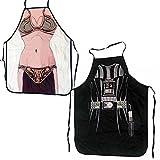 What is a geek? Now I was really curious; had the definition of geek changed?

So I googled, “definition of geek.” I was not surprised at what I found. Google stated first that a geek was “an unfashionable or socially inept person.” The second definition, “a carnival performer who performs wild or disgusting acts.”

From these definitions, it appeared that geek was still not a very favorable term when used to describe someone such as myself.

Those two definitions were used to define the word when used as a noun. The third definition was for the word when used as a verb, and it stated, “engage in or discuss computer-related tasks obsessively or with great attention to detail.” That was getting a whole lot closer to what I thought of when I thought of myself as a geek. Someone who was super-intelligent. Yeah, all of us geeks like the sound of that …. super-intelligent. Sure beats those other terms … moron, dunce, dope, imbecile … doesn’t it?

But I still was not satisfied with the results of my search. So I decide to dig a little deeper. To begin with, Wikipedia shares that the term geek is a slang term. Oops! We are headed down a rabbit trail; sorry ….

What is a Slang Term?

Googling again …. In its earliest use (mid-1700’s), the word slang was used to describe the way that “low or disreputable” people talked. By the early 1900’s, it took a small step up to refer to the language used “below the level of standard educated speech.” So if someone uses the slang term, “geek”, then they are using speech that is uneducated. And if I am a geek, that must mean that I am educated … or at least I speak as if I am.

This is sounding better and better. But I digress. Back to the subject at hand.

What is a Geek?

Wikipedia shares that geek was originally used to describe someone who was eccentric or “non-mainstream.” I have to admit that geeky people can be a little different … but we can’t help ourselves …. We just happen to think a little differently.

Wikipedia’s definition does get better for us geeks though when it goes on to share that currently the word is used to describe an expert or enthusiast obsessed with an intellectual pursuit or hobby. Forgetting the “obsessed” word for a minute, geek is beginning to sound pretty good!

But … gosh I hate that word … but, in the same sentence … yes the exact same sentence … it goes on to share that it has a typical uncomplimentary or judgmental meaning of a strange or dislikable person … especially one who is thought to be overly intellectual.

I’m beginning to feel like I am on a rollercoaster. And the geekiness in me is starting to rear its ugly head and ask, “What is wrong with being overly intellectual?” Can anyone answer this question for me?

Now Wikipedia takes another sharp turn in favor of the geek. In the very next sentence, where it goes on to explain that although it is often considered to be a derogatory term, it is also used self-referentially to proudly describe oneself as being interested in an intellectual or complex subject for its own sake. Now that sounds geeky!!! And I get it!

Geeks Just Want to Have Fun!

Comments for What is a Geek? What is the Opposite of Geek?