When Two Worlds Collide: Poetry and the Visual Arts

A Long History of Interaction

The history of the interaction between poetry and the visual arts is both long and broad, stretching not only far back into history, but also to all parts of the globe we inhabit. In almost every culture, poetry has reacted to the visual arts, and the visual arts have responded to poetry. The two can work well hand in hand, or there can be conflict between the two media, as if there is some sort of inherent competition between them. There can even be disdain on one side over how the other uses elements that are seen to be the "property" of the one feeling the disdain.

I have a keen interest in not only a harmonious coexistence, but an active integration of the visual arts and poetry. It has been my experience that integrating the two forms can lead to some wonderfully inventive results, and can also be invigorating to both the artist(s) and poet(s) involved in the project.

There are many ways that poetry can interact with the visual arts. Perhaps the most direct form of interaction is Ekphrasis, a form of poetry that responds to a specific work of art. Works of ekphrasis — graphic, often dramatic, descriptions of a visual work of art — can be found at least as far back in history as Homer. One of the most famous examples of ekphrasis is John Keats' "Ode on a Grecian Urn," while my personal favorite is W. H. Auden's "Musee des Beaux Arts." A sort of companion piece to the Auden poem is William Carlos Williams' "The Fall of Icarus," while another spinoff of the ekphrasis device can be seen in Oscar Wilde's The Picture of Dorian Gray.

In ancient times, "ekphrasis" referred to a description of any thing, person, or experience. Or, as has been stated by Tomar Yacobi, "Ekphrasis is an umbrella term that subsumes various forms of rendering the visual object in words. " The word comes from the Greek ek and phrasis, 'out' and 'speak' respectively. The verb form, ekphrazein, implies a proclamation, or calling an inanimate object by name.

The best works of ekphrasis go beyond merely describing, helping to illuminate the object viewed in the verse. In these poems, the description of the art highlights an idea, message, or thought that the poet can extrapolate from the art. It is the sort of contemplation that will leave you saying, "I've never quite looked at it that way before." And the longer-term result will be that you can never look at the art piece quite the same again either. When you next encounter it, you will find that the poem will have left its marks on the art.

While ekphrasis is a work of poetry growing out of a reaction to the visual arts, there is an equivalent strand that involves art built around poetry, art pieces that are a conscious response to specific poems. Some art even takes the written word and integrates it into the art piece. Many of the poems in the volume out of everywhere take an approach that is closely akin to this type of art, though they are presented primarily as poetry. 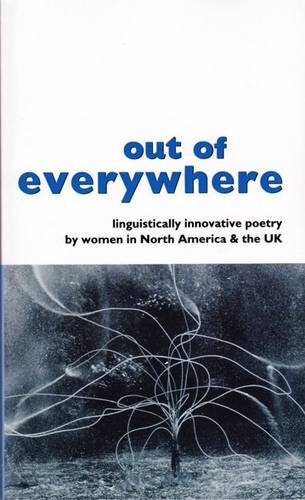 Out of Everywhere: Linguistically Innovative Poetry by Women in North America & the Uk
Buy Now

One of my own writing projects, overseen by decollection, was dark 'til dawn, which involved Shanghai-based artist Peter Zhou (周宇) designing and hand-painting a series of lamps in response to 30 of my haiku. Nick Flynn is a more noteworthy poet who has done a good bit of collaboration with artists working in other media, including visual artists.

Many creative types over the years have been both visual artists and poets. Amongst the ancient Chinese, the "four arts master" — one skilled in music, chess (strategy), calligraphy (poetics), and painting — was especially revered. Many poets today are similarly skilled in both written and visual arts. Some of my favorites include speculative poets Marge Simon and Teri Santitoro. Amongst the classical poets, William Blake is a notable example of a painter-poet who comes to mind.

I am sadly inept at painting, drawing, and similar endeavors. The only really impactful images I know how to create are those contained in words. That does not mean I cannot work directly with the visual arts in order to create a whole work in which art and poetry grow up together. It just means that I need to cooperate with another artist in order to accomplish this. I have been fortunate enough to engage in such projects in the past (and relish the chance to do it again in the future too). One such project led to the creation of Xenia, a character from another planet. In the Studio White • Exhibition 2011, photographer Desmond Ip and I played off of one another's work, each using our own form of art to create the whole story of Xenia. At some points, my poems came first, but at other times, Ip's photos came first, prodding me to write the verse to accompany it. It was an invigorating process.

In Japan, haiga is a traditional form of art/poetry in which a painting and a haiku are presented together. The art and the poetry should interact with one another, but not merely repeat the same message. Their interaction should be more subtle than that, with the painting not merely presenting a visual iteration of the image in the poem. In fact, one of the key elements of good haiku is a juxtaposition of two images, usually highlighting a contrast between the two. Haiga enriches this aspect of the haiku tradition.

Nonoguchi Ryuho is often seen as the founder of the meshing of haiku and the visual arts in Japan. As in all things haiku, Matsuo Basho is an exemplary figure in the realm of haiga. In Japan, especially during the Edo period, the painting of haiga and composing of accompanying haiku was a popular activity for social gatherings amongst the literati. Haiga is known for encompassing a wide variety of artistic styles. KrisL's hub on haiga offers a very thorough treatment of the form, including numerous examples that can be viewed online.

The recent increased interest in graphic poetry seems somewhat akin to the tradition of placing a sketch or painting on the page in order to illustrate or illuminate the poem. The use of visual images to bring the poem to life visually as an aid to understanding has long been popular with children's poetry, such as that written by Shel Silverstein or Dr. Seuss, though it is by no means limited to verse for younger readers. Several of Richard H. Fay's poems in Abandoned Towers are good representatives of graphic poetry.

Concrete Poetry is a form in which poetry and visual arts collide so completely as to become not only interacting forms, but a full integration of the two. 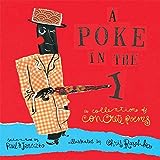 A Poke in the I: A Collection of Concrete Poems
Buy Now

R. P. Draper opens his essay, "Concrete Poetry" with this description of the form: "In its simplest definition concrete poetry is the creation of verbal artifacts which exploit the possibilities, not only of sound sense and rhythm — the traditional fields of poetry — but also of space, whether it be flat, two-dimensional space of letters on the printed page, or the three-dimensional space of words in relief and sculptured ideograms." Later in the same article, he makes an apt comparison between concrete poetry and advertiser's and journalist's use of print as a visual medium.

Guillaume Apollinaire's calligramme in the form of the Eiffel Tower is another good example of the form. Apollinaire was especially creative with the form, having generated numerous examples of concrete poetry.

To some degree, all poetry has an eye for visual impact, even when it is not concrete verse per se. Various elements of poetry, such as line breaks and stanza breaks, make it easily recognizable as different than prose writing when it is seen on the page. The format of poetry creates white space around the words, which can be seen as a figure for the space poetry allows for the reader. Some forms of verse, while not exactly concrete poetry, like playing with the white spaces, allowing the poem to speak as much from the negative spaces as from the words. One form that works this way is what I call erasure. A sample of my own poetry in this form,"In Captivity, by the Streams of Babylon," was featured in the art exhibition Things That Disappear in Shanghai in May 2011. Other samples of my work in this form include "Random Access Memory" and "Alienation," which was featured in the Studio White • Exhibition 2011. I stumbled onto the form via Edwin Morgan and his "Message Clear." Morgan wrote several poems in this style, including "Chinese Cat" and "The Computer's First Christmas Card." e e cummings penned another of my favorite examples in the form, "a leaf falls."

Similarly, calligraphy is means of bringing poetry to life visually. In fact, in calligraphy, the poetry is itself the art. Chinese calligraphy ranks amongst some of the world's greatest masterpieces in the visual arts, with a tradition that has stretched not only from generation to generation, but also across Japan, Korea, and other Asian nations. A whole culture of art and writing exists around calligraphy in Asia, where the study of calligraphy is seen as a fundamental ingredient in the life of a cultured person.

The tradition of the letterpress and broadsides in the West is another format that puts emphasis on the visual impact of the verse as it is presented to readers. In the day of high end printers and the ease of word processing software, the letter press still has an appeal to both readers and producers of poetry who appreciate the handcrafted look of letter press crafts. Broadsides, single sheets of printed poems, call to mind the old days of street literature, when these sheets would be plastered on the walls to be read by citizens as they mad their way through the city. Posters and hand stitched books likewise hold the appeal of something that has been lovingly put together to create a visual impact that is a suitable accompaniment to the verse on the pages.

One of the most innovative means of integrating poetry and visual arts I've come across in recent years is Motion Poems. Launched by animator/producer Angella Kassube and poet Todd Boss, Motion Poems pairs video artists with poets. The video artists work directly from the completed poems, rather than the two media growing up in tandem. The endeavor has been a huge success, with a regular screening festival in Minneapolis. It is an exciting new development in the interaction between poetry and the visual arts. [Note: Another exciting art installation incorporating Todd Boss's poetry was launched after the writing of this Hub. It is worth reading about in this article.]

As a poet deeply interested in the visual arts — despite my own clumsiness with my hands — I hope the interaction between the two media will continue to thrive in the future, and that more and more artists will find innovative ways to let even more multi-voiced, multi-layered art forms arise.