Summer Solstice during Autumn in Tucson

During fall 1989, I was an undergraduate student at the University of Arizona, in Tucson. The school bookstore was crowded and the titles were arranged by the subject and professor.

Econ 101 was over on the upper left shelf, behind the sweatshirts with large As on them or Puma like creatures wearing Derbies and growling. MLA handbooks, key chains shaped like cactus, pencils and pens led the way downstairs to the Modern Languages area which meant English among other languages.

I was an English major - or would declare it in a few semesters, hopefully before I graduated. It was always nice to see the row of Penguin classics and the Norton Critical editions with their scholarly essays in the back. I liked perusing row after row of classic titles: Dumas, the Brontes, Catcher in the Rye.

I soon came across the section for the Creative Writing courses - I found it hard to believe that was actually a college major. You could go to college to pursue a degree in poetry or fiction writing or even creative non-fiction writing and eventually find a driving a taxi cab while trying to find a publisher for your book which would of course be titled, The Great American Novel.

Creative Writing was a real major and even today, I still find that hard to believe.

One Day it will happen

At this time, I had only been to New York City once as a child - and the only memory I had was of a taxi cab that had paused to give us the right of way to cross the street. "You see", my mother said, "in America they wait for you. This would not happen in other countries". Even so, I appreciated the magnificence of the name of largest city in the United States and the third largest in the world: the images of the tall buildings, the noise of urban sounds, hot dog vendors and yellow taxi cabs and the rain in Central Park.

Flying into Tucson from the Bay Area was a fascination to me as I lifted up gently from the foggy, urban landscape of Oakland or SFO and landed into the red brick, dusty plains of the desert city. I liked the idea of travel and the community of airports with passengers having brief conversations and quickly exiting to points of their own. All air terminals are occupied with convenience stores that sold clothing, books and magazines, food and other items which were not necessities, but somehow reassuring just by their mere presence. Somehow a store gives one the sense of home.

Are you familiar with Sharon Old's Work?

Airports can be scary places

I carried a book called Prince of the City, which was set in New York because the cover of the book showed a well lit building at night and made me think of the urban magnificence of cities. I would have daydreams of city skylines at night, under a moon, or a canopy of invisible stars and imagine myself one day walking down a damp East Coast boulevard.

I first came across a copy of The Gold Cell under the listing of Poetry 309. This would be a third semester creative writing seminar. I was surprised to see that the creative writing courses were given codes just like Engineering classes.

. I had never heard of Sharon Olds - this was 1989 and it would be twenty years or so before she would be awarded the Pulitzer. The book was a maroon like color and had the image of a snake curling up upon itself and the title The Gold Cell, in magnificent yellow like color. I was a little curious by the mandala like design and when I read the first poem....

By the end of the longest day of the year he could not stand it,

and over the soft, tarry surface

to the edge, put one leg over the complex green tin cornice

and said if they came a step closer that was it.

Do you think American poetry as a genre is dead?

The Book and the poem

I was immediately taken away by the first poem in the book, "Summer Solstice, New York City". The poem came alive, like the city did and even though it was well punctuated, the poem's sentences read like one measure that you cannot stop.

I held up the copy of The Gold Cell, and looked it over, flipped through the pages and watched the text move by in a cinematic pace, catching phrases that stood out "Pope's Penis", "Sex Change Doctor", "Alcatraz" and "San Francisco". The last two caught my attention in particular because I was from the Bay Area and just about a month or two ago had walked down Broadway in the Alcatraz penitentiary.

I was more curious and looked up her biography and saw Old's association with the city by the bay. I had been fascinated by the Beats and read some of Ferlinghetti's work. I even ventured over to the City Lights Bookstore, half expecting to see him there, holding a worn notebook and jotting down notes in it. I walked by the bookstore when I was in San Francisco, but was afraid to go in. Just down the street were the lights from the topless clubs and adult theaters. 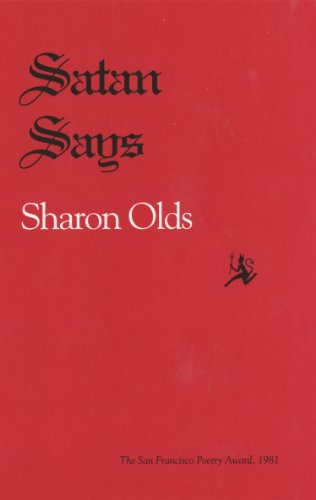 Satan Says Some Things About the Dead and the Living

I ended up buying this book, right then and there, even though it was designed for Poetry 309, a seminar/workshop class that I had not yet qualified for. This was upper division stuff, on the upper floors of the MLA bulding. There were no elevators in that building. This thought of it, sitting around a bunch of serious students talking about poetry, made me really nervous.

Old's style was refreshing, her imagery bold and crisp, the subjects in her writing were penned with an honesty, a flair. Nothing seemed out of bounds with her, abusive parents, her first sex, Marilyn Monroe. She was open without being vulgar and lacked the vanity and melodrama I had seen in so many other young writers who tried to tackle the mundane. She was a true poet. Her verse had a music to it and the sonatas ended with a perfect cadence.

I went on to discover two more of her earlier books: Satan Says, and The Dead and the Living. I became quite obsessed with her writing for awhile, wanting to emulate her style and find the everyday things to write about. I walked down city streets during San Francisco summers, wondering what made her write the poem "Alcatraz" and sometimes hoping to run into her in one of the sidewalk cafes, or along the boulevard with the ringing of the trolly cars and the sparks of the electric buses I wanted to go to the San Francisco Poetry Center, but at that age was terribly intimidated by anyone whose writing had made its way into print.

I finally wrote her a letter - actually sent one to her publisher and was surprised to get a handwritten letter back from her directly. I wanted her to sign my books even though I thought the idea of book signing kind of unusual. I didn't go to rock concerts much nor did i really have that much appreciation for popular music.

I packed my books up and sent along some return envelopes with sufficient postage to cover the cost of mailing the parcels. A week or so later, during spring break, close to my birthday, I received the books back in my student mailbox. They were signed and personalized, one of them even said "Cheers!".

They arrived on my 21st birthday and have been one of the best presents I've ever been given.